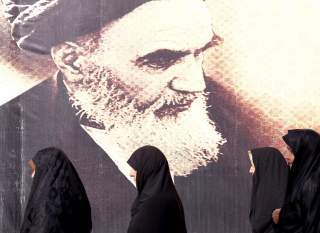 Last month, with mass protests underway on the streets of Tehran and other cities, one of Iran’s most senior clerics inadvertently sparked an altogether different sort of international incident.

On January 8, Mahmoud Hashemi Shahroudi, one of the country’s most powerful officials and a potential successor to Supreme Leader Ali Khamenei, traveled to Germany to receive medical treatment amid rumors of failing health. The visit prompted outrage from human-rights activists, and German authorities—under growing pressure from watchdog groups—contemplated bringing charges against Shahroudi for “crimes against humanity” for his role in directing the imprisonment and torture of numerous opponents of the Iranian regime. The sixty-nine-year-old jurist ultimately decided to flee the Federal Republic in order to avoid the fallout.

The episode, however fleeting, nonetheless tells us a great deal about Iran’s future, and about the generational transition now looming over the Islamic Republic. Shahroudi, after all, is hardly the only ailing Iranian ayatollah. Indeed, thirty-eight years after the Ayatollah Ruhollah Khomeini’s revolution, his Islamic Republic is ruled over by a clerical elite that is increasingly aged and infirm.

The statistics highlight just how much. Iran’s most powerful figure, Supreme Leader Ali Khamenei, is seventy-eight years old, and has long been rumored to be battling prostate cancer. Other Iranian leaders are similarly long in the tooth. Ahmad Jannati, the new chairman of Iran’s Assembly of Experts, the powerful clerical body that will select the country’s next supreme leader, will turn ninety-one this month. Ali Akbar Hashemi Rafsanjani, the powerful former president who preceded Shahroudi as chairman of Iran’s Expediency Discernment Council, was eighty-two years old when he died. By comparison, Iran’s “moderate” president, Hassan Rouhani, is a relative youngster at only sixty-nine years old.

The advanced age and growing infirmity of Iran’s senior leadership is all the more striking when compared with the country’s population as a whole. Over 60 percent of Iran’s eighty-two million citizens are currently thirty-five years of age or younger, born after the events of 1979 propelled Iran’s clerical ruling class to power. This cohort, in turn, has no recollection of the Islamic Revolution, and lacks the ideological bonds that would tether it securely to the current regime in Tehran.

It does, however, know exactly what it is missing. With nearly half of all Iranians now possessing access to the Internet, the Islamic Republic ranks as one of the most wired nations in the Middle East. This penetration, coupled with decades of access to foreign media, culture and commerce, has made the Iranian people painfully aware of their own government’s shortcomings. It’s no wonder that Iran’s leaders have come to see Western influence as a mortal threat.

But even without the destabilizing example provided by the West, the survival of Iran’s clerical regime is far from assured. Ali Khamenei, who has served as Iran’s Supreme Leader since Khomeini’s death in 1989, has long labored under challenges to his religious legitimacy—challenges that have arisen anew of late, thanks to a recently leaked government video that suggests his turn in Iran’s top post was always envisioned to be both temporary and limited. Khamenei, moreover, has no clear successor, and factional religious politics promise to make the question of regime continuity a contentious one whenever he passes from the scene.

Against this backdrop, the most recent uprising in Iran, like the one that preceded it in 2009, served as an uncomfortable reminder to Iran’s clerics that their regime is fast approaching its “sell by” date. Predictably, the Iranian regime responded to the recent protests with immediate repression, and subsequently with cosmetic fixes designed to convince Iran’s restive populace that it was responsive to their demands (such as the firing of some controversial figures and notional curbs on the economic activities of the regime’s powerful clerical army).

Yet none of the core issues that propelled the latest protests—including economic malaise, arbitrary religious edicts, and foreign adventurism at the expense of Iran’s own citizenry—have been addressed in a meaningful way. Nor are they likely to be, given the rigid nature of the Islamic Republic’s governing ideology. Rather, Iran’s geriatric rulers can be expected to rely ever more heavily on state repression to preserve and prolong their hold on power.

Nevertheless, they are already painfully aware of a fact that the rest of the world should also soon grasp: when it comes to change in Iran, the most powerful force working in favor of freedom might just be the passage of time.

Ilan Berman is senior vice president of the American Foreign Policy Council in Washington, DC. Rachel Millsap is a Junior Fellow at the Council.