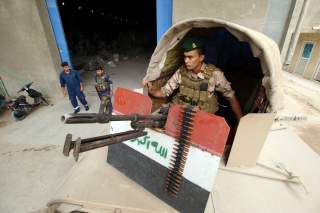 On July 14 Iraqi security forces in Iraq woke up to protesters storming Al Najaf International Airport and the Safwan border crossing with Kuwait. Southern Iraq was boiling with anger. The government shut down Facebook and elite Counter Terrorism Service special forces were dispatched south amid the crises. The immediate cause was economic woes, anger over lack of government services, waste and oil prices.

Meanwhile in central and northern Iraq the army, police and Shi’ite militias were busy hunting down ISIS remnants in the country’s biggest operation since Baghdad declared major combat operations over in December 2017. In mid-July Popular Mobilization Units (PMU), a mostly Shi’ite militia group called Hashd al-Shaabi, swept areas near Dibs on the road from Kirkuk to Erbil while the 15 division operated in Nineveh. Yet ISIS was still able to operate almost freely in Salahuddin province, attacking a checkpoint near the governor’s house according to a local report.

The operation against ISIS has been dubbed “Revenge of the Martyrs” and was launched on July 5 after numerous ISIS attacks throughout Kirkuk, Nineveh, Diyala and Salahuddin provinces. On June 19 ISIS, manning a checkpoint in fake uniforms, kidnapped thirty members of the Shammar tribe, torturing and executing seven of them. The brutality led a local Shammar leaders to threaten to begin their own campaign against ISIS in Salahuddin. Ali Nawfil Al-Hasan, a sheikh and provincial leader said ISIS was active in the open, gathering in places like Mteibeja, a rural area in the province.

Baghdad is now overstretched as it seeks to quell the uprising and conduct its anti-ISIS operations. According to Iraq observer David Witty, Iraq sent six Emergency Response Division (ERD) battalions and three Counter-Terrorism Service battalions from Baghdad to Basra on July 15. These are the best units in Iraq’s arsenal. The CTS were trained by the U.S.-led coalition and did the heavy lifting in 2016 and 2017 in the battle for Mosul. The ERD also led the battle on the eastern side of Mosul in 2017. Both units suffered casualties during the battle and a year later they have not been rebuilt. A Lead Inspector General report from the fall of 2017 noted that the CTS suffered heavy losses in battle and “no new recruits” were trained by September last year. The ERD, which had three thousand trained personnel since 2015, carried out no training as well in late 2017. In the first half of 2018 that dismal record changed a bit with 515 CTS and 295 ERD trained respectively. The Inspector General noted that the CTS was “being transitioned back to its primary role of targeting specific insurgent or terrorist groups.” Dealing with rioters was not what they were trained for.

The decision to launch a large anti-ISIS operation throughout four Iraqi provinces points to the fact that ISIS was never defeated in these areas. Some of them are rural areas that have been home to Sunni extremists and insurgents since the first days of the insurgency in 2004. Others are areas ISIS prepared over the last four years to resist in, stashing weapons and building networks of tunnels that they became proficient at during years of hiding from coalition air cover. The large area Iraqi media claims the current operations cover indicates the scale of the threat. Photos and video of convoys of federal police, artillery units, helicopters, howitzers and vehicle-mounted rocket launchers, indicate that this is not a precision-based assault on several ISIS caves, but a sweep of swaths of territory such as the Hamrin Mountains and in the area of Dibs north of Kirkuk. Dozens of villages were cleared and by July 10 the Iraqis moved into a second phase according to local Arabic media reports.

As the anti-ISIS mission was continuing protests broke out in Basra in southern Iraq. The immediate cause was anger over lack of government services and corruption. On July 12, after protesters clashed with police and blocked roads to the giant West Qurna oil field, foreign companies evacuated workers. The riots and protests spread throughout the south to Dhi Qar, Najaf, Babil, Muthanna and Wasit governorates. In Najaf protesters took over the international airport and chanted anti-Iranian slogans. Protesters also targeted political parties that are considered closer to Iran, including the Dawa party, and headquarters of parties that control their own militias, such as Kata’ib Hezbollah, Asaib Ahl al-Haq and Badr. The attacks on the latter three represent an attack not only on Iranian-backed militias that form the heart of the Popular Mobilization Units (PMU), but also an attack on Hadi al-Amiri’s Fatah alliance.

In Iraq the war on ISIS helped cement the position of Shi’ite militias such as Kata’ib Hezbollah, Asaib Ahl al-Haq and Badr in the government system. In 2014 they formed the PMU and Badr assumed control of the interior ministry. In 2016 parliament agreed to incorporate them as an official security force. Prime Minister Haider al-Abadi called the militias the “hope” of the country in 2017. In the May 2018 national elections Amiri’s Fatah list came in second, showing that he enjoyed widespread support. However Muqtada al-Sadr who has opposed Iran’s heavy-handed influence in Iraq politics came in first. This is the backdrop to the wave of protests in the south.

Iraq lacks a new government two months after the elections. Uncertainty has led to blame, not only against the government but also against Iran. Iranian state media and local militias have blamed foreign “infiltration,” the United Arab Emirates and Saudi Arabia for fueling the protests. This is the kind of messaging that Tehran has to explain its own problem with protesters over the last six months. Baghdad also borrowed from Iran’s playbook by disrupting the internet and shutting down social media such as Facebook to stop protests from spreading.

By Sunday, July 16, Abadi had decided that a combination of carrot and stick might suffice. Baghdad transferred electricity output from Nineveh towards Basra to show residents it was answering their needs. Unsurprisingly this led to anger in Mosul that they were being punish to appease the south. Mosul, a year after liberation from ISIS, is still recovering. “One of the richest countries with oil has no electricity! A country with two river, its people have no water to drink! This is how Iraq looks when it becomes the “Iraq state of Dawa,” tweeted “Mosul Eye,” one of the most prolific bloggers and Mosul activists who survived ISIS in Mosul during the war. This appears to be sentiment shared by many influential social media users across Iraq. Some mention the Arab Spring and historic rebellions in Iraq that began in Basra.

The overall number of killed and wounded in the protests in Iraq is not precisely given by a variety of local media reports amid the government’s attempt to stymie information and disrupt the internet; but dozens of security forces have been reported wounded and hundreds of protesters. Several protesters have been killed. Abadi, who styled himself Iraq’s victor over ISIS in the May elections, has appeared aloof in the face of the rising chaos. He waited five days before seeking to address reforms, such as bolstering electric output and promising to allocate hundreds of millions of dollars to Basra Province. The unrest has only spread, with international carriers such as FlyDubai suspending flights to Najaf and protesters attacking local government offices in several provinces.

A map of Iraq in July shows that there is widespread unrest throughout the country’s ten southern provinces and Baghdad. In four central and northern provinces there is a continuing ISIS insurgency. Only in the Kurdish region and Anbar is there relative calm. The Kurdish region saw massive protests and unrest following the referendum in September 2017 after the federal government took over Kirkuk and protests erupted demanding better pay and jobs and an end to corruption. In some ways the protests in southern Iraq mirror the demands in the Kurdish region, but they have been more violent and their anti-Iranian stance is unique.

For regional Middle Eastern states, and the sixty countries in the global coalition against ISIS the unrest in Iraq is troubling. It points to the fact that the coalition invested major resources in fighting ISIS and also in what it called “stabilization” without acknowledging that Iraq was drifting toward a new round of instability. The Inspector General report released in May claimed that the United States was supporting security, governance and civil society, humanitarian assistance and stabilization. One problem was that the former Shi’ite militias were now being paid the same as the regular army. “The Iranian-aligned elements of the PMF [PMU] remained one of the major security challenges,” the report notes. “US officials reported this quarter that Iraian support to certain Shia PMF militias posed the greatest threat to safety of US personnel in Iraq.” The PMU control of areas of Iraq has led to a decline in “rule of law” and stability. These are serious charges that underreported as donors gathered in February to pledge $30 billion to reconstruct Iraq. Concerns also went unnoticed after the elections as Iran’s Islamic Revolutionary Guard corps commander Qasem Soleimani came to Baghdad to discuss the future Iraqi government.