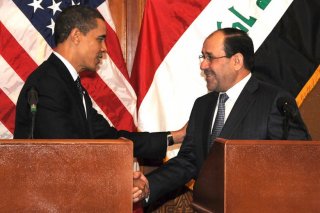 The April 30 parliamentary elections in Iraq will go a long way toward determining the future of the country and of U.S. involvement in the region. Al-Maliki’s third term as prime minister is at stake, but so are the relationships between the governing structures of the country (namely, between the government in Baghdad and Iraq’s increasingly restive provinces).

The United States abandoned long ago the idea of building a democratic state in Iraq, but it still wants the country to remain united. As a result, Washington takes a cautious, lukewarm position toward the largely autonomous Kurdistan region and is suspicious of more autonomy for other provinces.

But in Iraq, the tension between the central government in Iraq and provincial authorities is growing. Under the leadership of Prime Minister Nouri al-Maliki, Iraq’s central government has strengthened considerably and so has al-Maliki’s role within it. Immediately after the U.S. intervention, the fall of Saddam Hussein, and the disbanding of both his army and party, Iraq was left with a weak center. The United States worried that the 2005 constitution would add to the problem. Under pressure from Kurd representatives, the constitution granted a large degree of autonomy to Kurdistan, limiting the power of the central government. It also recognized the right of other provinces to transform themselves into autonomous provinces. Had all provinces done so, Iraq would have turned into an extremely decentralized federal system, verging on a confederation. Indeed, some, including then Senator and now Vice President Joe Biden started talking of a forthcoming soft-partition of Iraq.

The choice of Nouri al-Maliki as prime minister in the wake of the January 2006 elections seemed to confirm this trend. Al-Maliki was the compromise candidate of the squabbling parties, chosen because he appeared to have no independent power base. U.S. officials worried about the consequences for Iraq of a politically weak prime minister presiding over an institutionally weak central government.

Forward to 2014 and Iraq again faces the possibility of fragmentation and the need to redefine the relationship between Baghdad and regions or provinces, but for different reasons. Al-Maliki has cast himself as Iraq’s new strong man, seeking to tighten his control over the central government and Baghdad’s control over the provinces. He does not see himself presiding over a weak federation. Although all provinces have elected councils that on paper enjoy considerable power, al-Maliki is striving to keep political and financial control in Baghdad. Many provinces are pushing back. At least seven provincial councils outside Kurdistan have voted in favor of turning their province into an autonomous region. Al-Maliki is resisting, and discontent is mounting. Sunni-majority Anbar, where citizens protested against Baghdad’s action for months and where radical Islamist groups now control much of the two largest cities, is not the only province that demands change. All Sunni-majority provinces, but also a number of important, oil-producing Shia ones such as Basra, want to redefine their relationship with Baghdad. And Kurdistan is pushing the limits of its autonomy. According to the Kurdistan Regional Government, the constitution gives it the right to sign contracts with oil companies and even to export hydrocarbons independently of Baghdad, as long as it pays the central government 83 percent of the revenue. With production of both oil and gas increasing rapidly in Kurdistan, a new oil pipeline connecting Kurdistan oil fields directly to Turkey, and additional pipelines to Turkey being planned, relations between Baghdad and Erbil are hurtling toward a crisis.

Elections results are crucial to the outcome of this conflict. Al-Maliki and those around him embrace the concept of a centralized state led by a powerful government, and if their State of Law Coalition gets enough votes to lead the new government, they will continue to follow present policies. Faced with a dramatic resurgence of sectarian violence, al-Maliki seems to see force as the only solution. While strong security measures are undoubtedly needed, the government is doing nothing to address political grievances that contribute to the crisis. The take-over of Anbar’s major towns by armed radicals occurred in the wake of a decision by al-Maliki to break up and disperse protest camps set up by vocal but nonviolent groups challenging his actions.

The conditions under which the 2014 parliamentary elections are taking place differ greatly from those prevailing in 2010. Iraq was largely peaceful then, thanks to the presence of over 100,000 U.S. troops. Elections in the provinces had taken place a year earlier, but the councils were still uncertain of their position and not openly challenging the central government. Kurdistan was already at loggerheads with Baghdad over the signing of oil contracts, but it was not producing oil or gas in substantial amounts yet, and thus was totally dependent on transfers from Baghdad for its budget.

In 2014, violence is escalating in all Sunni provinces and in Baghdad, and so is political discontent. In Kurdistan, even usually cautious politicians are hinting that independence is an option. Yet, at least superficially, the election campaign looks like a playback of the one in 2010. The major political leaders are the same, as are the major political coalitions—although some of their names have changed. The parties are vying for control of the Council of Representatives. The controversial issues are the possibility of a new term for al-Maliki and whether the future government should be an all-party one of national reconciliation, like the present one, or a majoritarian one controlled by the block with the most seats in the Council of Representatives. Behind the political jockeying, however, lurks the issue of relations between Baghdad and the provinces.

As in 2010, the main contenders in the elections are coalitions, not individual parties, which are too fragmented to run on their own; the Iraqi High Election commission lists on its website 275 “entities” participating in the elections. Even the coalitions are numerous. Some are quite large—al-Maliki’s State of Law Coalition includes a dozen parties; Ammar al-Halim’s Muwatin includes at least seventeen in addition to his own Islamic Supreme Council of Iraq; and Ayad Allawi’s Wataniyya includes some fifteen parties. Making things more complicated, coalitions do not necessarily compete everywhere and in some provinces, parties belonging to different national coalitions are on the same list. For example, in Nineveh and Salahuddin, both Sunni-majority provinces, no national Shia coalition is on the ballot, but candidates from different Shia coalitions are participating as members of the Nineveh National Alliance and the Salahuddin National Coalition respectively.

All coalitions are overtly sectarian in 2014, a change from 2010 when most pretended otherwise. At the same time, representation for all major groups—Shias, Sunnis and Kurds—is more fragmented than in 2010, with parties and coalitions less inclined to work together. In 2010, for example, Ayad Allawi’s Iraqiyya was the major representative of non-Islamist Sunnis. Now, Usama al-Nujaifi’s Mutahidun, Saleh al-Mutlaq’s Arabiyya and to some extent, Allawi’s Wataniyya are competing for that vote. On the Shia side, five coalitions are running independently of each other. Furthermore, the fate of the former Sadrist bloc, now al-Ahrar, is uncertain because Moqtada al-Sadr has officially withdrawn from politics. Sadrists won forty seats in 2010, and their support was crucial to al-Maliki’s successful bid to become prime minister. Kurdish parties are also running separately, rather than as part of a Kurdish alliance.

From Elections to Government

With such large number of parties and coalitions competing—along with the open sectarianism of all coalitions, as well as the lack of cohesion within each confessional or ethnic group—forming the new government will be again a lengthy and difficult process (it took five months in 2006 and almost ten in 2010). The stalemate in 2010 was broken by an agreement negotiated in Erbil to form a government of national reconciliation. Al-Maliki has made it clear he wants a majoritarian government this time, but he may not have enough support.

A new victory for al-Maliki, particularly if he headed a majoritarian cabinet, could well be a loss for the country and a challenge to the U.S. goal of keeping Iraq united. Al-Maliki has clearly shown in his eight years in office that he embraces a traditional Arab vision of the state—with a strong, all-controlling central government led by a strong, all-controlling leader. It is a vision increasingly at odds with the reality of Iraq—Kurdistan is pushing the limits of its autonomy, violence in Sunni provinces is out of control, and Shia oil-producing provinces demand a greater share of the revenue.

While it is clear from his past actions that al-Maliki’s vision cannot address this reality, the election campaign does not suggest that other Iraqi politicians have clear alternative visions on how to foster reconciliation and stability in the fractious country.

No matter what the election results, the path to forming a new government and to building an Iraq less at war with itself will be a long one.

Marina Ottaway is a Senior Scholar at the Woodrow Wilson Center and a long-time analyst of political transformations in Africa, the Balkans, and the Middle East.