ISIS Is Full of Pragmatic Ideologues 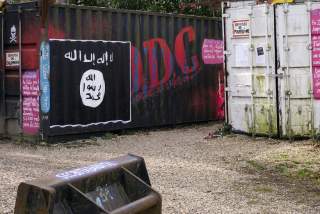 Over two years ago, Islamic State invested its ideological legitimacy in a caliphate. Its total state experiment in Syria and Iraq embodied the group’s strategic ambitions. More recently, much has been made of Islamic State’s territorial contraction and decline in foreign fighter recruitment. Many analysts, policymakers, and commentators interpret its reversion to guerrilla tactics in Iraq—as well as its metastasizing global terrorism network—as signs of weakness. Others are captivated by the threat of a burgeoning cyber caliphate. It is important to identify and mitigate the threats posed by these shifting trends. However, they must not distract us from Islamic State’s grand strategic goals of building a takfirist caliphate.

Islamic State explicitly states its ideological intentions time and time again, including in an issue of its English language magazine, Dabiq. Such propaganda is complemented by other indicators of Islamic State’s ambitions, such as its investment in education and youth indoctrination. These reveal a group intent on redefining Islam in its image, extinguishing all other interpretations of the religion, and compelling everyone within reach to submit to its will. Policymakers and analysts are wise to maintain focus on these variables. We must not forget the long-term, cultural threats posed by the group.

Case study analyses of Islamic State’s governance indicate the group’s operational flexibility. A recent paper published in Small Wars Journal delves further into this research. The author concludes that Islamic State is a resilient and adaptive group whose operational decision-making is based on efficacy rather than ideology. It adopts economic models, security apparatus designs, and bureaucratic procedures regardless of provenance. Identifying these instances of Islamic State’s ideological hypocrisies is helpful. Broadcasting the group’s opportunistic impurities is one way to delegitimize the movement and dissuade prospective recruits from joining.

Yet while Islamic State’s near term priority—organizational strength—allows for tactical flexibility, the group remains rooted in an uncompromising ideology. Its strategic actions and long-term goals are dictated by its beliefs. The conceptual line along which Islamic State’s decision-making pivots between organizational and strategic goals is understood to be its “ideological threshold.”

Recent press coverage and analysis have focused on Islamic State’s operational/tactical shifts. However, on the other side of the ideological threshold, the group has remained steadfast in its grand strategy. Any serious attempt to combat Islamic State must begin with an acknowledgement that the group is intent on defining Islam exclusively as a takfiri-jihadist religion.

In a recent issue of Dabiq, the group appears exasperated when reminding readers of those goals. After numerous attacks, “one would expect the […] West to pause and contemplate the reasons behind the animosity and enmity held by Muslims for Westerners,” it writes. In an article titled, “Words of Sincere Advice,” it warns Muslims against committing riddah—a form of apostasy—against its form of Islam. They include a picture of Cpt. Humayun Khan’s headstone at Arlington National Cemetery with the subtitle, “Beware of dying as an apostate.” Finally, Islamic State’s grand strategic motivations are laid bare in an article that is curtly titled, “Why We Hate You & Why We Fight You.” In it, the group narrowly defines Islam in its takfiri image but then notes, bitterly, that few “among the disbelievers” agree that Islam only exists in Islamic State’s form.

The climax of the article is worth quoting at length:

The gist of the matter is that there is indeed a rhyme to our terrorism, warfare, ruthlessness, and brutality. As much as some liberal journalist would like you to believe that we do what we do because we’re simply monsters with no logic behind our course of action, the fact is that we continue to wage—and escalate—a calculated war that the West thought it had ended several years ago. We continue dragging you further and further into a swamp you thought you’d already escaped only to realize that you’re stuck even deeper within its murky waters. . . And we do so while offering you a way out on our terms.

Islamic State communicates—through propaganda and strategic action—its goals: to define Islam and permanently alter the cultural space within dar al-Islam. The group is also deeply invested in education as well as youth organizations. Islamic State seeks to indoctrinate children and build a sustainable population of takfiri-jihadist believers. A recent profile in Der Spiegel highlights the group’s efforts, while documents seized in Manbij confirm what has long been reported: Islamic State curricula are designed to propagate its ideology.

Islamic State continues these and other strategic efforts while its tactics shift and borders contract. In May, the group’s (now late) spokesman, Abu Mohammed al-Adnani, acknowledged that Islamic State’s governed territory may ultimately be lost. The audio message could indicate the group’s pursuit of survival over a commitment to its apocalyptic ideology. But it more likely indicates the leadership’s strategic patience. Because the latter is dependent upon organizational strength, the eventual implementation of Islamic State’s takfiri-jihadist, Islamist ideology may be forestalled. However, so long as there are fertile minds and geopolitical soil to exploit, Islamic State’s threat will survive. In this sense Islamic State’s leadership is full of pragmatic takfiris. They are committed to an ideological end game but operate with a realist perspective, which influences their strategic patience as well as their decision-making malleability.

Through the years, Islamic State and its precursor organizations have refined their adaptability in the face of threats. Its organizational pragmatism and learned resiliency makes it a cunning and elusive adversary. Underlying its survivability is a motivation to permanently alter the Islamic world and geopolitical landscape. As recent developments rightly garner our attention, we must remember that our adversary continues to influence the cultural landscape. When developing, committing, and resourcing a strategy to defeat Islamic State, we should analyze its long lasting cultural-religious impact and ask what must be done to respond in kind.

Craig Noyes is an open-source analyst who focuses primarily on sectarianism, effectiveness of violence, and Levantine affairs. He is employed by Boston College.