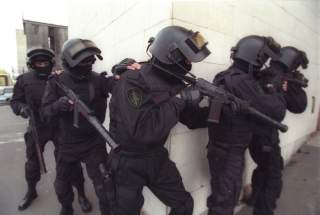 Killings of leaders of the ongoing insurgency in Russia’s North Caucasus no longer make front page news in either Moscow or foreign capitals, and the recent violent death of Emirate Caucasus’ emir Aliskhab Kebekov is no exception. But regardless of whether such deadly news is buried in the inside pages or not, the North Caucasus insurgency, whose representatives not only regularly target “mainland Russia,” but also travel to fight in countries of the Greater Middle East and raise funds in Europe, won’t go away.

Few recall it today, but when the North Caucasus’ then most notorious warlord Shamil Basayev was blown to pieces in 2006, his violent death was thoroughly covered by media both in Russia and the West, with even business dailies like the Wall Street Journal running front-page stories. But nine years later, when Russian commandos killed the latest chief of the North Caucasian insurgency in Dagestan on April 20, Wall Street Journal didn’t even bother to report the passing of a man the U.S. State Department had designated as terrorist, along with his organization, which serves as the umbrella organization for most of the North Caucasus’ jihadist networks. Neither were Russian editors particularly agitated by the news with Russia’s leading daily Kommersant running a short report on inside pages.

Such a lack of coverage may reflect the public’s fatigue with the low-intensity conflict that has been dragging on in the North Caucasus for more than a decade. It also shows how the gravity of the threat that North Caucasus’ jihadist networks pose has diminished in the eyes of the public, especially in the wake of the emergence of new challenges, such as the Islamic State, which both Russians and Americans now view as the main threat to their countries. This perception has been fueled by the North Caucasus-based terrorist networks’ failure to deliver on their threats to attack the Olympic Games in Sochi and the government’s claims that the overall number of terrorist acts registered in Russia declined by 30 percent in 2013 and then by another 50 percent in 2014.

But there’s a reason why Russia still ranks 11 in the list of countries with highest incidence of terrorism in the University of Maryland’s Global Terrorism Index-2014. The number of terrorist attacks may have diminished recently in Russia as federal authorities claim, but not a week goes by without a report of someone blown up or shot in the North Caucasus. Moreover, the 2014 index predicts that Russia may experience an increase in the incidence of terrorism. If continued, Russia’s ongoing economic woes may eventually impact the federal government’s ability to address some of the North Caucasus’ chronic socioeconomic ills that contribute to persistence of the North Caucasus insurgency. The dynamics of the latter will also be influenced by the outcome of the international efforts to dismantle the Islamic State in Iraq and Syria. Should these efforts succeed, some of the 1,000 Russian-speaking jihadists that are currently fighting in the ranks of IS alone may head back home to continue their jihad in Russia and its neighbors. Should these efforts to prevent the rise of IS fail, it might just be a matter of time before leaders of this organization turn their gaze to the North Caucasus as they seek to revive the caliphate. It is worth recalling that one of IS’ leaders, an ethnic Chechen by the name of Tarkhan Batirashvili has already threatened to take jihad to Russia.

Paradoxically, Kebekov’s death may have increased opportunities for Batirashvili and his IS colleagues to expand its influence to the North Caucasus. Kebekov didn’t want the Emirate Caucasus to come under the sway of IS. He even fired then head of the Emirate Caucasus’ Dagestan branch Rustam Asilderov after he and several other Dagestani warlords pledged allegiance to the Islamic State last year. While disapproving of allegiance to IS, Kebekov had referred to Al Qaeda’s Ayman al Zawahiri as “our leader.” One of Kebekov’s key allies and chief Sharia judge of Emirate Caucasus’ Dagestan Vilayat Magomed Suleimanov has also opposed alliance with IS and denounced those pledging loyalty to this organization. Long War Journal predicts it will be Suleimanov, who goes by his nom de guerre Muhammad Abu Usman, who will be the next emir of the Emirate Caucasus. However, it can not be ruled out that IS sympathizers may either gain the upper hand in the struggle for succession at the Emirate Caucasus or break away to set up an IS faction in the North Caucasus. Either would be a rather disquieting development, given the human and material resources that this organization commands and can, therefore, direct to the North Caucasus. It should also be noted that in addition to pursuing ties with Al Qaeda and IS, supporters of the Emirate Caucasus have also allegedly engaged in fundraising in Europe, according to longtime scholar of political violence in the North Caucasus Gordon Hahn.

The killing of Kebekov will, of course, cause some disruption of coordination within the Emirate Caucasus, but it is likely to be only temporary, as killings of his predecessors have demonstrated. Whoever succeeds Kebekov will carry on with the campaign of political violence regardless of whether he leans towards IS or Al Qaeda. As killings of Kebekov’s predecessors going as far back as Basayev demonstrate, networks in the North Caucasus have learned to adapt to such beheading by becoming more loosely organized and “leaderless” in the way they act. For this insurgency to diminish significantly, the Russian government needs to not only keep the implacables on the run and disrupting their ties with international terrorist organizations, but also to address factors that scholars of political violence in Russia believe to be driving insurgency in the North Caucasus. These factors include spread of militant Salafiya in the North Caucasus, abuses of the local population at hands of law-enforcers and disparity in living standards between residents of the North Caucasus and “mainland Russia.”

Simon Saradzhyan is assistant director of the U.S.-Russia Initiative to Prevent Nuclear Terrorism and a fellow at Harvard Kennedy School’s Belfer Center.