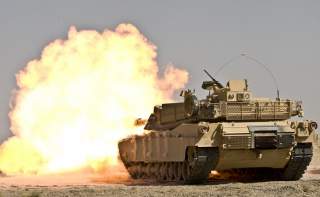 From a pure military standpoint, the Islamic State of Iraq and the Levant has taken a significant pounding from the air over the past nine months. Indeed, ever since President Barack Obama authorized U.S. military airstrikes on ISIL targets in Iraq and Syria on August 8, 2014 — a decision that was originally justified by the White House on the grounds of saving the ethnic Yazidi community from being wiped out in an act of genocide — the terrorist group has lost considerable military hardware and manpower. As of May 8, according to Central Command headquarters, U.S. and coalition aircraft have destroyed 6,278 ISIL-related targets— a full nine months since the air campaign was initiated.

These targets include, but are certainly not limited to: heavy weaponry captured by retreating Iraqi and Syrian government soldiers on the battlefield; ISIL fighting positions, checkpoints, and convoys; transportation; communications infrastructure; leadership; and oil refineries used by the organization to sell stolen Iraqi oil on the black market. Over 77 tanks alone have been taken off the battlefield by coalition aircraft, an achievement that has no doubt diminished ISIL’s ability to expand into new territory against opponents who may find themselves outgunned and undermanned.

When taken together, the Obama administration has argued that ISIL has lost between 25 and 30 percent of its territory since August 2014, when the group was at its peak. The White House has used these figures as proof that their counter-ISIL strategy is working, even as the president himself has remarked time and again that it will take a very long time to degrade and “ultimately defeat” the extremist organization.

The administration is right to use the “it will take a long time” qualifier, because while ISIL continues to suffer incredible destruction in its ranks (at least 8,500 ISIL militants have reportedly been killed, according to government estimates), the terrorist-army is still one of the most powerful players in both Iraq and Syria. The group has retained its stronghold in Raqqa and the Iraqi city of Mosul despite persistent U.S. operations from the air. And, like Al-Qaeda in the Arabian Peninsula, the Pakistani Taliban and Boko Haram, it has mastered the ability to cause international headlines with a single, coordinated, mass-casualty attack.

While it would be easy to cite determination, nihilism, ideology, and bloodthirsty ambition as the sole factors responsible for ISIL’s survival, the fact is that if it weren’t for these weapons, the organization would likely have been diminished to the pathetic stature of Al-Qaeda in Iraq circa 2010.

If it takes a village to raise a child, it only takes a single suicide bomber to destroy the very fabric of a local community. Throughout its twenty-five month existence, ISIL has had no shortage of young Muslim men willing to strap on an explosive vest or ride in an explosive-laced vehicle and drive it towards a target. Whether it’s a Shia mosque filled with worshipers or an Iraqi military base in the far corners of Anbar province, ISIL’s legion of suicide bombers has served as a useful tool to inflict terror in the hearts of those supporting the government or other rebel factions. The March 20 suicide bombing in a Sanaa mosque purportedly claimed by a ISIL Yemeni affiliate is a case in point: a series of blasts coordinated by five suicide bombers killed roughly 137 worshipers, some of whom were deliberately targeted after fleeing the first blast inside the mosque. The operation in the heart of the Yemeni capital, and in an area that was supposedly Houthi-controlled, shocked many Yemenis around the country and turned out to be the largest suicide bombing attack in the nation’s recent history.

The suicide bomber, however, is not only used to kill civilians or send a message. ISIL also integrates suicide bombers into its military operations; it is part of the terrorist group’s battlefield strategy. The typical ISIL-operation, particularly on a hard target with perimeter walls and decent security like a Syrian military outpost, consists of one or more suicide bombers being deployed to breach the walls before a larger group of ISIL fighters enter into the facility. It’s a dependable playbook for an organization like ISIL, where military units in remote areas of Iraq and Syria are often pleading for ammunition and greater support from their governments.

When traces of chemical weapons are found, it’s usually in Syria, where the Assad regime has been documented numerous times to have dropped sarin and chlorine-filled conventional munitions on insurgent-held neighborhoods. The tactic became such a problem and humanitarian catastrophe that the United Nations Security Council — rarely agreeing on anything with respect to the Syrian civil war, courtesy of Russia and China — struck an agreement that required Bashar al-Assad to close down his chemical weapons facilities and ship his chemical weapons out of the country for good (according to The New York Times, the Organization for the Prohibition of Chemical Weapons recently detected traces of sarin, indicating that Damascus may be either stonewalling or failing to declare all of its stocks).

However, there has been at least one case of a chemical weapon possibly being utilized by ISIL. Samples taken from the clothing fragments of ISIL fighters after a failed January 23 car bombing against Kurdish forces in northern Iraq tested positive for weaponized chlorine, and the Kurdish fighters in the immediate vicinity of the attack experienced symptoms associated with chlorine exposure. Fortunately, ISIL is not known to possess any stockpiles of chemical weapons, but the January 23 incident on the road between Mosul and the Syrian border illustrates just how catastrophic a single chlorine bomb in ISIL’s hands can be.

When discussion about the Vietnam War comes up, U.S. troops spraying Agent Orange into crop fields or forests are often the most iconic images that come to mind. IED’s serve the same purpose for the 2003-2011 Iraq war. Of all of the weapons that U.S. soldiers had to face during its eight year involvement in Iraq, improvised explosive devices tossed in piles of rubbish on the side of the road proved to be the most dangerous to U.S. troops. IEDs are an insurgent’s best friend: they’re cheap and easy to make, they can be hidden in the most unassuming of places, and the explosives can be detonated at a safe distance if configured to a remote control. If it weren’t for the extraordinary dedication of Secretary of Defense Robert Gates in accelerating the production of Mine Resistant Ambush Protected (MRAP) vehicles, there is no doubt that more Americans would have lost their lives to these kinds of weapons.

The Islamic State, taking a page from its ancestors in Al-Qaeda in Iraq, have utilized IEDs to tremendous effect against Iraqi troops and Shia militia units fighting alongside them. Yet, in a small change, ISIL has tended to use IED’s as a defensive weapon: lacing entire houses and neighborhoods with explosives to make clearing the area more time consuming and difficult for the Iraqi security forces (see: Tikrit). The organization also drops IEDs on the major roads to slow down government reinforcements and supply runs. The tactic has given ISIL units retreating from a city or village more time to implement their exit strategy, all the while claiming the lives of Iraqi troops who fail to scan the roads or houses closely.

There are dozens upon dozens of designated terrorist organizations operating in the world today, but ISIL distinguishes itself from them all by a simple characteristic: they have access to the heavy weapons of a modern national army.

The group’s takeover of Mosul and Tikrit last summer, combined with the hasty retreat of tens of thousands of Iraqi troops, was a big score for the Islamic State: their fighters captured some of the very same weapons that Washington sent to the Iraqi Government for its national defense. General Najim al-Jabouri, a former mayor of Tel Afar, said it best to The Daily Beast immediately after ISIL’s takeover of Mosul: “This organization [ISIL] has grown into a military organization that is no longer conducting terrorist activities exclusively but is conducting conventional military operations. They are attacking Iraqi military positions with company- and battalion-size formations. And in the face of that the Iraqi security forces have not been able to stand up to it.”

Since the capture of Mosul and an entire stockpile of U.S.-manufactured weapons eleven months ago, ISIL has put them to good use on the battlefield. ISIL would not have been able to sustain its offensive in the Kurdish city of Kobane for so long without them. And it’s unlikely that ISIL would have had the military capability needed to expel Iraqi and Syrian government forces from military bases typically built to withstand conventional insurgent maneuvers. Fortunately for the U.S.-led coalition, ISIL has lost much of that weaponry from air strikes over the past nine months.

The Intangibles: Brutality and Fear

The FARC, Al-Qaeda, the Pakistani Taliban, the Haqqani Network…they all rely on fear to control the people who happen to reside inside their territory. It’s a tried-and-true tactic for terrorist organizations hoping to administer and hold territory for the long-term—an objective that underlines ISIL’s ultimate goal of building an Islamic caliphate from the ground up.