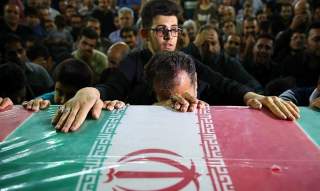 For years, the Islamic State terrorist group has harbored the ambition of attacking Iran. This finally came to pass on June 7, when two teams of ISIS terrorists nearly simultaneously struck the Iranian parliament and the shrine of the Iranian republic’s founder, Ayatollah Khomeini, two symbols of the 1979 Shia revolution. The first team, comprising four militants, opened fire indiscriminately in the parliament, while the second team of two suicide bombers blew themselves up inside the mausoleum, killing seventeen people and injuring forty others. ISIS claimed responsibility for the attack through its official news agency, Amaq.

This is the Islamic State’s first major attack on Iran. Hitherto Iran has remained safe from the ISIS-inspired and -directed attacks that have taken place in Pakistan and Afghanistan to its east, as well as in Iraq and Syria to its west. All the attackers were Iranian nationals, recruited from the country’s Sunni minority community. The attack is significant for a number of reasons.

First, the attack was purely for ideological reasons: the Islamic State is a Sunni supremacist group whose ultimate aim is to create a global Sunni caliphate. The Islamic State espouses extreme hatred for Shia and considers them apostates. It has been engaged in attacks against Shia throughout the Middle East, as well as Afghanistan and Pakistan. The attack against Iran will bolster its ideological credentials among Sunni extremist groups and the embattled Sunni tribes of Iraq and Syria as the vanguard of Sunni interests in the Middle East.

Second, amid numerous military and territorial setbacks in Iraq and Syria, the Islamic State is a cornered jihadist tiger, desperate to stay relevant. By attacking Iran, it is trying to demonstrate that it is retains the capability and the wherewithal to mount transnational attacks, and that it is here to stay. Arguably, the Islamic State is moving to the next phase of its lifecycle by decentralizing its operation, turning into a jihadist movement from a hierarchical organization and indulging in clandestine activities. Symbolic attacks in important places such as Tehran will be an important tool of ISIS’s strategy in this next phase.

Third, the attack was to seek revenge as the Iranian-backed Shia militias, among others, have played a key role in the Islamic State’s defeat in Iraq and Syria. The attack is a political statement from the Islamic State, warning Iran to check its military adventurism against the group and putting a premium on future offensives. By hitting Shia Iran, the Islamic State has become the first Sunni militant group to take the war to the “Safavids” (as ISIS terms Iran in its propaganda literature). Moreover, it will fuel fresh recruitments for ISIS along with winning it the support of other like-minded Sunni extremist groups. The attack will also enable the group to attract funding from wealthy anti-Iran donors in the Middle East.

Fourth, the timing of the attack is significant. It has come at a time when geo-sectarian tensions in the Middle East are worsening, and the Saudi-Iranian regional rivalry has reached its lowest ebb. The recently concluded Arab Islamic American Summit in Riyadh singled out Iran as a major state sponsor of terrorism in the Middle East, and advocated a policy of isolation against Iran. Similarly, a statement in May from Saudi Arabia’s Prince Mohammed bin Salman in reference to taking the battle inside Iran leaves no doubt that the Saudi-led forty-one-nation Islamic Military Alliance against terrorism is an anti-Iran project. The Islamic State is clearly exploiting the openings created by Middle Eastern regional rivalries to further its influence.

Additionally, the Islamic State struck Iran during Ramadan, the Muslim holy month of fasting. The attack came on the heels of ISIS strikes in London and Manchester. For the last two years, the Islamic State has regarded Ramadan as a month for jihad, conquest and martyrdom to justify its attacks. Historically, several key Muslim battles, including the Battle of Badr in 624 CE, took place during Ramadan. This historical legacy adds a geopolitical dimension to the holiness of the fasting month, which the Islamic State has invoked to intensify its attacks. ISIS will use its Ramadan attack against Iran as a template to urge its followers to attack Shia in other parts of the world as well.

Five, within the global jihadist community, the attack on Iran will give the Islamic State an edge over Al Qaeda in winning the hearts and minds of other jihadist groups. In its propaganda literature, the Islamic State has criticized Al Qaeda for being soft on Iran. Following the U.S. intervention in Afghanistan in 2001, Al Qaeda entered into a secret agreement with Iran not to attack it in return for safe passage to Iraq, supplies and shelter for some of its key leaders, including Osama bin Laden’s family. When Abu Musab al-Zarqawi, the founder of Al Qaeda in Iraq, ratcheted up his anti-Shia campaign in Iraq, the present Al Qaeda chief Ayman al-Zawahiri wrote a letter to him directing him to desist from attacking Iran, as it could jeopardize the Al Qaeda–Iran agreement. This does not mean there is any love lost between Al Qaeda and Iran. Al Qaeda’s decision not to attack Iran was not ideological, but tactical. It saw no benefit in provoking Tehran while it was focusing on the U.S. interventions in Iraq and Afghanistan at that time. Following the Iran attack, the Islamic State will further strengthen its narrative of bringing a Sunni jihadist war to Iran.

The Islamic State has not only struck Iran, but it has also carried out attacks against Saudi Arabia and other Sunni Arab states. This creates enough common ground not only between Saudi Arabia and Iran, but also between the United States and Iran, to cooperate against the Islamic State, particularly when it is under siege and on the run. If the Saudi-Iranian sectarian rivalry and the recent diplomatic conflagration between Qatar and Saudi Arabia (and its other Sunni allies) are not resolved, it will neutralize the gains made against the Islamic State, allowing to regroup and revive. At this critical juncture, coordinated efforts are essential to take the ongoing fight against ISIS to the next level by targeting its various affiliates in Southeast Asia and the Af-Pak region and its lone-wolf operators in Europe, along with creating counternarratives against its ideological appeal.

Abdul Basit is an Associate Research Fellow (ARF) at the S. Rajaratnam School of International Studies (RSIS), Singapore. He can be reached at [email protected]