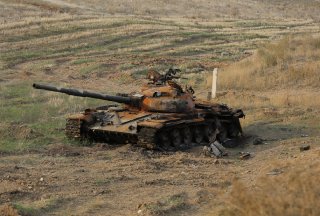 STEPANAKERT, NAGORNO-KARABAKH—Armenia’s defeat in the 45-day Nagorno-Karabakh War was largely the result of its forfeiting dominance over the skies. Armenia does not have Azerbaijan’s vast oil wealth. Its economy remains strangled by a Turkish and Azerbaijani land blockade. That economic reality influenced Armenia’s military strategy to focus on parity with Azerbaijan’s ground forces. Azerbaijan’s air force, after all, both small and equipped with legacy Soviet Sukhoi-25s, MiG-21s and MiG-24s. Nagorno-Karabakh’s topography, meanwhile, resembles Switzerland. Even with smaller ground forces, the Armenians believed they could hold the higher ground. It was a fatal miscalculation. Not only did Azerbaijan augment its air force with Turkish F-16s, but its purchase and use of dozens of Israeli kamikaze and surveillance drones tipped the balance of the war against Armenia.

Israelis may justify their relationship with Azerbaijan in realpolitik consideration: In its crudest terms, it is a relationship based on a weapons-for-energy calculation. Jerusalem sold Baku billions of dollars’ worth of top-shelf military equipment, and Israel received almost half of its oil needs from Azerbaijan. The long-term detriment to ties may soon surpass any short-term gains, however.

Many Armenians—and ordinary outside observers—focus on the moral argument: The victims of one Holocaust not only turning a blind eye toward but also selling weapons to the potential perpetrators of another. That the Azeris (and Turkish Special Forces) started the war almost one hundred years to the day after Turks invaded the newly-independent Republic of Armenia against the backdrop of the Armenian Genocide colored Armenians’ understanding of the war. President Reuven Rivlin’s assurances to his Armenian counterpart Armen Sarkissian that Israel’s military trade was “not aimed against any side” further rang hollow given the rapid delivery of arms in the days prior to and perhaps during the conflict. Realists in Israel and elsewhere might dismiss moral arguments given the immediacy of other interests but, in the case of Israel’s Azerbaijan involvement, cynical short-termism will come at a high price.

Consider Israel’s own border considerations: The need for “defensible borders” has, for nearly a half-century, been among Israel’s top priorities in any peace settlement. The late Yigal Allon was a founder of the Palmach, the pre-independence Jewish special forces, and his subsequent political career included eight years as deputy prime minister and three years as minister of foreign affairs. In 1976, he wrote a Foreign Affairs article entitled “Israel: The Case for Defensible Borders” which articulated Israeli fears and shaped its understanding of how land-for-peace might develop. Dore Gold, an academic who advised both prime ministers Ariel Sharon and Benjamin Netanyahu, and Israeli political and military veterans associated with his Jerusalem Center for Public Affairs, have authored several reports on defensible borders as a critical need for viable peace.

Armenia has long made similar security calculations to Israel: The districts which separate Armenia from Nagorno-Karabakh are crucial to the security of both. At issue is not only the high ground and communication links, but the Kelbajar [Qarvachar] district which the Russia- and Turkey-imposed ceasefire agreement awarded to Azerbaijan is also the source of 85 percent of the entire Republic of Armenia’s water supply. Not only does Azerbaijan now have the power to cut-off Armenia’s water supply, but Armenians officials worry that Azerbaijan or the radical Syrian Arab Islamists whom they employed as mercenaries, could simply dump toxic or radioactive waste into the stream and poison Lake Sevan which serves as Armenia’s main reservoir. Israel, of course, has previously raised water security issues with regard to the Sea of Galilee and the Golan Heights. Now, however, the precedents it has established by backing Azerbaijan against Armenia so that Baku could impose a solution that ignores defensible borders and water security undercut Israel’s future negotiating position. Azerbaijan may happily have purchased Israel’s drones, but the cost to Israel’s long-term security is far greater than Israelis realize.

Nor is it clear that the peace-keeping lines will work. The Russian peacekeepers I encountered both in Stepanakert and in the Kelbajar district were professional. They were friendly toward locals. They let children sit on top of their BTRs, drank vodka with older residents in order to build rapport, and systematically reached out to NGO, both Western and local, in order to establish mechanisms to coordinate. That said, their lines are thin. The Russians have neither been able to stop kidnappings of Armenian civilians by Azeri forces or their mercenaries, even along the safe-passage Lachin corridor nor have they been able to prevent skirmishing around the Sotk goldmine. Should chaos envelop Russia when President Vladimir Putin dies, the Russian peacekeepers could evaporate as quickly as they came and leave Armenia exposed.

The situation along the Azerbaijan-Armenia border is a far cry from the buffer zone which Israel required from Egypt upon the return of the Sinai. Israel’s assistance to Azerbaijan in the war and the lack of buffer or demilitarized zones in the districts separating Armenia from Nagorno-Karabakh likewise will set a precedent to enable the avoidance of demilitarized zones in portions of the West Bank which will ultimately become part of a Palestinian state.

Israel’s embrace of Azerbaijan has not only been commercial but also strategic as the two countries cooperated against a common adversary in Iran. Many Israeli officials, of course, believe the Islamic Republic poses an existential challenge. The clerical regime in Iran, however, has also threatened Azerbaijan because that country’s secular Shi’ite regime provided an alternate model which many Iranians craved. Supporters of strong Israel-Azerbaijan ties juxtaposed the two countries’ surveillance, monitoring, and espionage cooperation against Armenia’s traditionally strong ties to the Islamic Republic.

Here, Israeli officials’ misreading of the regional dynamics creates a self-fulfilling prophecy: By embracing Azerbaijan and Turkey but remaining silent on those two countries’ blockade of Armenia, they force Armenia to rely on Iran as an economic lifeline. Nearly one-third of Armenians make their living in agriculture. To export produce by air because of the blockade would be expensive and make the good uncompetitive. Iran, then, becomes the only real option. The same is true with regard to minerals and most manufactured goods. A more far-sighted Israeli policy would be to help Armenia bypass reliance on Iran by demanding Turkey and Azerbaijan open their borders to Armenian goods.

The final aspect of Israel’s short-sightedness involves the more than 7,700 Arab or Turkmen mercenaries transported into Azerbaijan from Syria by Turkey in order to wage religious jihad against Christians. The identities of these mercenaries are increasingly known: Many come from Syria and some previously fought for Al Qaeda-linked groups or the Islamic State. Israelis may depict Azerbaijan as secular and respectful of freedom of religion but, for President Ilham Aliyev to embrace militiamen who destroy churches, behead prisoners, and engage in anti-Christian polemic as they cut off ears and gauge out eyes of captured prisoners, suggests the opposite. At the very least, Azerbaijan’s embrace of Islamist mercenaries might not only destabilize the country in the long run, but it could also make Israel more vulnerable. Simply put, there is no such thing as a good terrorist and by turning a blind eye toward Aliyev’s most recent actions, Israel is undercutting its own war on terror: how can it complain that Hamas terrorists in the Gaza Strip are beyond the pale when Jerusalem simultaneously albeit indirectly cooperates with such mercenaries against Armenia?

Israel’s relations with Azerbaijan have developed over decades. Perhaps the tight embrace of the two states once made sense, but times have changed. Armenia is a democracy, while Azerbaijan has become a family-run dictatorship. Armenia embraces religious freedom while Azerbaijan works with Islamist extremists. Azerbaijan’s hatred toward Armenians further allows Iran to exploit divisions. At the same time, whereas Israel once had few options to fulfill its energy needs, it now can rely not only upon Cyprus and its own Eastern Mediterranean gas fields, but also the United Arab Emirates. Abu Dhabi’s human rights record is far from perfect, but at least it does not incite genocide.

Israel need not break ties with Azerbaijan; there is still much about which the two countries can cooperate. But, just as the United States did not let its Arab partners dictate the U.S. relationship with Israel nor let Pakistan and India dictate Washington’s ties to the other, neither should Azerbaijan presume to dictate Israel’s relationship with Armenia. Rather than be partisan in the dispute, Israel’s goal should be to have cordial relations with all parties. So long as Jerusalem supports Baku uncritically, however, not only will Israel bring a lasting moral shame upon itself, but it will also create precedents corrosive to its own long-term strategic interests.