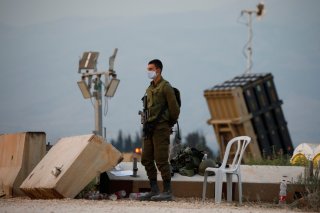 When Israel starts shooting at Russian aircraft, it's time to worry.

But that's what happened last month, when a Russian drone accidentally—or allegedly accidentally—flew from Syria into northern Israel. Israeli forces attempted to shoot down the drone, marking the first time that Israel has fired on Russian forces operating in Syria.

The incident occurred on July 17, when a Russian drone took off a Syrian air base near Damascus, according to an Israeli Air Force investigation cited in Israeli newspaper Ha'aretz. The drone crossed the Israel–Syria border over the Golan Heights and then flew southwest, where it flew in circles—as military drones do when performing surveillance missions—over a kibbutz in the Galilee near Kiryat Shmona.

Someone in the Israel Defense Forces had enough sense to contact the Russian military over a special hotline established precisely to avoid border incidents. "There were at least seven phone calls in the course of about twenty minutes, but to all of them the Russians replied that none of their drones had crossed into Israeli territory," Ha'aretz reports.

By then, the Israelis had confirmed the intruder wasn't one of their drones, which left the possibility that it belonged to Hezbollah's growing drone fleet. Never shy about using force to protect their airspace, Israeli forces scrambled two F-16s and launched Patriot antiaircraft missiles to destroy the drone.

"One of the planes launched a missile but missed the target," Ha'aretz writes. "The IAF [Israeli Air Force] aerial defense system was also activated, but the Patriot batteries were unable to intercept the drone. There was a problem with one of the missiles fired by the battery, while the second missile missed the target. The planes chased the drone when it backtracked eastward, toward the Syrian border, but didn’t hit it, and the drone flew into Syrian territory."

To make the situation even more bizarre, it is the Israeli press—citing unnamed Israeli officials—who is reporting that Moscow has admitted that the drone was Russian. Yet Russia's RT news station reported on July 18, the day after the incident, that a "mystery drone" was responsible. Russian site Sputnik News then ran an article on August 7 that repeated Israeli media claims that the drone was Russian, though the article contained no confirmation or denial from Russian authorities.

Given that Russia has established a hotline with Israel, and has enough problems on its plate trying to manage the Syrian conflict, a provocative  overflight of Israeli territory doesn't seem likely. So while the drone was probably Russian, it was also probably was an accident.

Accident or not, both Russia and Israel should be embarrassed by the whole episode. Russia because the drone didn't just stray into prohibited airspace as aircraft sometimes do. It flew deep into northern Israel and circled a kibbutz. Unless Israeli kibbutzes now resemble downtown Aleppo (compare an aerial view of a kibbutz to an aerial view of Aleppo, the mishap suggests that Russian ground-control operators need remedial lessons in navigation.)

However, Israel also appears incompetent. It fired not one, but three missiles at a drone that probably wasn't taking evasive action. None hit. Granted that drones can be hard for air defenses to detect and track, but what if the intruder had been an Iranian ballistic missile or a Hezbollah kamikaze drone aimed at the Haifa ammonia factory?

If there is any good news here, it is that Israel apparently did not identify the drone as Russian before deciding to attack it. Nonetheless, despite the precautions both sides are taking to avoid conflict, Russian warplanes flying combat missions on a long-term basis over Syria raises the prospect of a manned Russian aircraft straying into Israeli airspace.

Errors like that happen in wartime. If an advanced U.S. Navy Aegis cruiser can mistake an Iranian airliner for an F-14, then a Russian fighter can accidentally bomb an Israeli town.