An Israel-Arab Air Defense Coalition Could Harm the Middle East 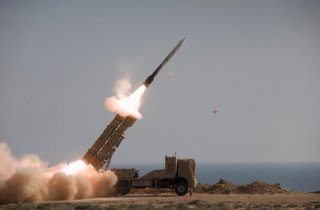 In preparation for President Joe Biden’s trip to the Middle East this week, a secret meeting of military officials from Bahrain, Egypt, Jordan, Qatar, Saudi Arabia, the UAE, and Israel met in Sharm El Sheikh, Egypt to discuss the potential for an Israeli-Arab air defense coalition. Dubbed by the Israelis as the Middle East Air Defense Alliance (MEAD), the plan is to share information about Iranian missile and air defense threats to the region—ballistic and cruise missiles as well as drones—and provide maximum visual coverage to achieve early detection of these threats.

However, missile defense integration is just a bigger band-aid over a seeping wound, which could, at worst, come at the expense of new dialogue between Iran and its adversaries to treat the infected area. Saudi Arabia and the UAE have been engaging with Iran bilaterally to reduce tensions, but without a complementary diplomatic initiative to promote these talks and, ideally, inspire a regional dialogue, a missile defense coalition could increase the possibility of confrontation.

If Washington cannot walk and chew gum, then not only is diplomacy absent from the center of U.S. foreign policy but the plan risks being perceived as merely the anti-Shia coalition Secretary of State Antony Blinken warned former President Donald Trump against constructing in 2017. As Blinken wrote at the time, “An anti-Shia coalition masquerading as a Middle Eastern security alliance will only fuel those sectarian fires and produce more, not less, terrorism. Instead of taking sides in that conflict, Washington should press Riyadh and Tehran to stop feeding it.”

While engaging with Iran to ensure it cannot get a nuclear weapon by attempting to revive the Joint Comprehensive Plan of Action, known as the Iran deal, a dual track pushing Bahrain, Egypt, Jordan, Qatar, Saudi Arabia, the UAE, and Iran to engage diplomatically and to take greater responsibility for regional security has been missing. Military-to-military relationship building must be coupled with a diplomatic track to manage and prevent crises from occurring.

Missile Defense Cooperation Is Not New

Three decades of U.S.-led efforts to create an air/missile defense architecture among the six Gulf Cooperation Council (GCC) states of Bahrain, Kuwait, Oman, Qatar, Saudi Arabia, and the UAE have not gotten off the ground due to the same old challenge: lack of trust. No states are willing to cooperate at the expense of bilateral security guarantees from the United States and none of the previous efforts to create a cooperative framework attempted to include Israel. Rather, it fits a familiar pattern of securitizing Middle East policy. Although there is something to be gained by developing cooperation in areas of security, the marginal benefit from syncing air defenses would be small unless accompanied by a diplomatic process that treats the root of the infection.

Under the umbrella of the Clinton administration’s Cooperative Defense Initiative, the Hizm al-Taawun initiative tried to integrate air defense information collected by GCC states as a step toward missile defense data sharing. However, the initiative largely broke down as the GCC states did not want to share airspace information with each other. The Bush administration, too, via its Gulf Security Dialogue, promoted military interoperability and encouraged the GCC states to purchase U.S. missile defense systems. The Obama administration also proposed the U.S.-GCC Strategic Cooperation Forum in 2011 and it was initiated in 2012 to address Gulf political, security, and economic issues in a multilateral forum. At the 2013 Manama Dialogue, Secretary of Defense Chuck Hagel even launched a U.S.-GCC Defense Ministerial that was to include a GCC missile defense framework and the sale of weapons systems to the GCC as a bloc.

These efforts continued into the Trump administration, which explored expanding NATO’s security assurances to the Middle East and, separately, creating a Middle East Strategic Alliance (MESA) with the GCC plus Jordan and Egypt. However, MESA was seen as solely serving U.S. and Saudi interests in confronting Iran. While Bahrain, Saudi Arabia, and the UAE sought to confront Iran, other regional states (Egypt, Jordan, Kuwait, Oman, and Qatar) were reluctant to participate in an anti-Iranian security framework. Egypt refused to follow Riyadh’s lead because the initiative risked increasing tensions with Iran, and the regional security architecture collapsed. If the coalition is at risk of being perceived as an anti-Shia coalition, it could breed even more sectarian conflict and will not find wide support in the region.

There is no question that ballistic missile, cruise missile, and drone attacks from Iran and its proxies threaten the Gulf countries of Saudi Arabia and the UAE, as well as global energy markets. The United States’ special envoy for Yemen, Timothy Lenderking, has stated that the Houthi militants conducted about 375 cross-border attacks into Saudi Arabia in 2021 alone.

Further, as Russia’s invasion of Ukraine drags on, attacks on oil and natural gas facilities in the Gulf could have massive humanitarian consequences in every corner of the world. Additionally, Russia’s increasing reliance on missile attacks on civilian targets as an instrument of terror sets a frightening example for states facing adversaries with missile programs of their own. Clearly, missile and drone threats are a serious challenge, but a regional air/missile defense coalition is at best a stopgap to resolving the security crisis diplomatically. It comes up short on several fronts.

First, the cost ratio. Even with a strong intercept record, the offense-defense race dramatically favors Iran. The Royal Saudi Air Defense Forces fire two Patriot interceptors per target—costing the kingdom an estimated $3 million each—while the incoming missiles and drones can cost anywhere from $20,000 to as little as $1,000. The Saudis are only keeping pace by dipping into their massive coffers, which is not an option for every country, and only protecting key points where a strike would cause millions in damages. Further, replenishing interceptor stockpiles has faced significant delays because Riyadh’s gross human rights violations have provoked the ire of the U.S. Congress, which must approve high-value sales.

Second, saturation. Modest enhancements to air defense coverage may be desirable, but they are not a game changer as Iran will retain the capability to overwhelm defenses by saturating key target areas with incoming missiles. The U.S. intelligence community believes Iran could fire as many as seventy missiles at once and its launcher mobility complicates monitoring and counterstriking. Further, their salvo strategy suggests Iran will continue to grow its stockpile and develop more sophisticated countermeasures to overwhelm the defenses arrayed against it.

While the proposed arrangement would make regional air and missile defenses somewhat more effective, and possibly have some deterrent value, it would do little to change the underlying strategic calculus. At best, the plan could create some negotiating space for a dialogue on security in the region.

Coupled with questions about the viability of air/missile defense as a substitute for diplomacy, it would be contrary to Arab states’ interests to be drawn closer to the conflict that exists between Iran and Israel. Although it can be argued that attacks by Iran and its proxies on Arab states, particularly Saudi Arabia, have elements of a state of war, Gulf governments will be cautious about provoking Iran further, as they have shown time and time again.

The shadow war between Israel and Iran has increasingly broken out into the sunlight with high-level assassinations taking place in Tehran and Israeli citizens being told to shelter in place while in Turkey. However, confronting Tehran militarily without the United States is off the table for the Gulf countries. Both Riyadh and Abu Dhabi made diplomatic overtures to avoid a war with Iran. Even after the attacks on Saudi oil facilities that disabled 5 percent of global supply, Riyadh was hesitant to blame Iran directly, and Kuwait became a key interlocutor to de-escalate tensions.

Further, other Gulf states have favored and facilitated de-escalation with Iran rather than military confrontation. Oman successfully mediated backdoor negotiations between now National Security Advisor Jake Sullivan and Iran in 2011, which led to the landmark nuclear deal with Iran. In 2019, the emir of Qatar traveled to Tehran at the United States’ urging after the assassination of Quds Force commander Qassem Soleimani to defuse escalation. Clearly, the Arab Gulf states have not signed up for a confrontation with Iran without the United States backing them.

It is in the interests of the Arab states to avoid war with Iran, and building defense cooperation can be a useful tool to this end. It is not, however, the only tool in the box, and used exclusively could actually prove counterproductive. The United States should not rely merely on military measures such as improving air defense but embrace and support the talks between Iran and the UAE and Iran and Saudi Arabia as the path to a regional security architecture. Saudi Arabia has now seen that the ceasefire in Yemen has done far more for its security than missile defenses ever could. The thrust of U.S. involvement in the Middle East should put diplomatic engagement first.