Israel: An Asset for Africa 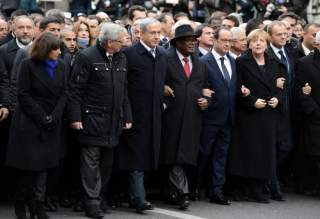 President Obama’s absence aside, last Sunday’s parade of world leaders in Paris has spawned endless red-carpet commentary. Did Israeli prime minister Benjamin Netanyahu push his way to the front, which the opposition Labor party turned into a 1990s Frogger-like computer game, or was his prominent spot long reserved? Commentators agreed that former French president Nicolas Sarkozy’s attempts to slide into the front row were decidedly gauche, spawning a series of images with Sarko present throughout key moments in world history. Another video mocked Turkish prime minister Ahmet Davutoglu for being the only leader who did not receive the customary French bise from French president Francois Hollande. Finally, an ultra-orthodox Israeli newspaper photo-shopped out German chancellor Angela Merkel and other female leaders from their front page. In the spirit of Charlie Hebdo, an Irish newspaper returned the favor and eliminated all male leaders from its photograph. Satire lives on.

Yet one noteworthy coupling somehow evaded detection: Netanyahu walking arm-in-arm with President Ibrahim Boubacar Keita of Mali, a country that does not have diplomatic relations with Israel. Front and center, the pairing seemed natural and heartfelt, and was described matter-of-factly in the Malian press. One item even reported that IBK, as the president is known, even offered to attend the funerals of the four Jews murdered in the kosher market in Israel. Later, both leaders praised the actions of a brave Malian employee, who helped conceal up to fifteen people in a downstairs freezer and provided intelligence to the police.

Contrast this behavior with that of two other leaders, Palestinian Authority president Mahmoud Abbas and Turkish prime minister Ahmet Davutoglu, who both attended the rally and have diplomatic relations with Israel, and yet refused to shake Netanyahu’s hand while walking mere feet away from him. In just the last two weeks, Abbas’ Fatah Party posted images of Netanyahu with a noose next to his head and in a Nazi uniform on its Facebook page. Meanwhile, Fatah sits in government with Hamas, an Islamist terror organization. Turkish president Recep Tayyip Erdogan and Davutoglu compared Netanyahu to the Paris terrorists, accusing him of committing massacres and crimes against humanity. Davutoglu went on to say that “freedom of the press does not mean freedom to insult” and that “we cannot allow insults to the prophet…printing the cartoon is a grave provocation.” The mayor of Ankara even blamed Mossad for the attacks. As the Turks thundered, Ankara also confirmed that the female companion of one of the terrorists had traveled through Turkey to Syria.

How could it be that Mali, one of the few sub-Saharan states without relations with Israel, stood literally shoulder-to-shoulder with the Jewish State against jihadi terrorism? Because like Israel, like France, and like much of the civilized world, Mali is engaged in an existential struggle against radical Islam. In IBK’s own words, “my country was saved from the terrorist barbarism by (the French military operation) Serval…It was imperative that I be here for Mali’s honor, for its dignity…Do you understand my emotions, it is impossible for me to not be here.” Two years after stopping the advance of Islamic militants in northern Mali, thousands of French soldiers remain in Mali and other Sahel countries in an extended counterterrorism operation.

Mali isn’t the only African country to have signaled a public shift on Israel. In 2011, Senegal and Gambia severed diplomatic relations with Iran. Late last year, Rwanda and Nigeria cast the decisive abstentions at the UN Security Council, rejecting a Palestinian statehood bid. Like Mali, Nigeria is also fighting a medieval Islamist insurgency, Boko Haram, which is committing massacres on the scale of Srebrenica. President Goodluck Jonathan has visited Israel several times, thanking Israel for sending anti-terror experts to Nigeria last year. Israeli arms sales to Africa have doubled in recent years. As radical groups across the Sahel exploit the breakdown in regional order caused by the Arab revolts, African leaders increasingly see Israel as an asset, not a liability, in the fight against jihadism.

Perhaps the IBK-Bibi show of unity will lead to a diplomatic breakthrough between Israel and some of the five remaining sub-Saharan holdouts—Mali, Mauritania, Guinea, Niger and Chad. Released from Qaddafi’s anti-Israel hold and threatened by the Libyan fallout, the security environment of Sahel countries has deteriorated dramatically in recent years. At a moment when European countries are increasingly critical of Israeli counterterrorism policies, African countries are increasingly cognizant of and even thankful for Israeli counterterrorism capabilities.

Gabriel Scheinmann is the Director of Policy at The Jewish Policy Center and a Doctoral Candidate at Georgetown University.

Image: Flickr/Office of the Prime Minister of Israel