Israel's Ceasefire with Hamas Did Not Resolve Gaza's Problems 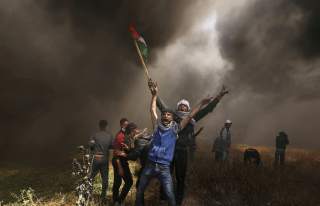 Israel and Hamas are locked in a local version of “Groundhog Day,” with yet another 24-hour iteration that ended on November 13 with the exact same “understandings” of previous violent rounds. This one started with a botched Israeli special operation in Southern Gaza. The small elite team was accidentally discovered by a local Hamas activist, that triggered a chain of events leading both parties to the edge of a full-blown military campaign. After Hamas launched more than five hundred missiles and rockets unto Southern Israel, the Israeli cabinet met for seven hours, with Netanyahu reportedly “locking all ministers inside the room” to prevent political infighting through the media. The decision to cease fire was made without taking a vote, and the prime minister’s office released a statement describing it as unanimous. Almost instantly, the heads of the two ultra-right parties denied the statement, and shortly thereafter one of them, Defense Minister Lieberman, announced his resignation due to the government’s “weak policy vis-à-vis Hamas,” and “total loss of deterrence.”

This remarkable scenario, whereby an accidental bystander in Gaza brings about the imminent fall of an Israeli government, an affirmation of the so called “Butterfly effect,” reflects the deeper realities and balance of power between the Israeli regional power and the Palestinian non-state actor. Since staging a violent coup in 2006, Hamas has essentially faced a consistent Israeli policy—cutting across multiple governments—designed to topple its regime via economic, political and military pressures. Hamas resisted the Israeli strategy using various means, including tunnels to Sinai and Israel, several rounds of negotiations with Egypt, as well as with the rival Fatah and the Palestinian Authority (PA), while constantly and systematically focusing on force build up, especially long-range missiles and rockets. Intense large-scale fighting broke out in three intervals —2008, 2012, 2014—and ended each time with informal “understandings,” basically easing the economic siege on Gaza in return for enforced “calm.”

On the surface, November’s round is no different. However, a whole lot has changed. The most significant development is in the socio-economic sphere: the two million Gaza inhabitants have been rapidly sinking into a full-fledged humanitarian crisis, with minus 6% GDP growth in the first quarter of 2018, and Hamas can no longer afford to sustain the status quo. Oddly, the rapid deterioration is the result of Israeli, U.S. and PA policies, with the first two acting in full coordination, and the latter independently. The United States has cut funding to the main humanitarian agency UNRWA, and Israel decided to withhold clearance revenues on taxes it collects for the PA based on the Oslo accords. For its part, the PA has been increasing the pressure on Hamas in Gaza, trying to regain its foothold on the ground, and has also been alarmed by the prospect of Donald Trump’s “deal of the century” granting Gaza a degree of independence at the expense of the West bank and the PA.

Cash-strapped, jobless and increasingly hopeless, the Gazans have begun to direct their rage towards the Hamas government, who in turn tried to channel the emotional outburst towards the fences separating Gaza from Israel. Tens of thousands were bussed to designated demonstration areas every Friday, and the level of violence, casualties and wounded soared. A primitive but successful massive remote arson campaign, using helium balloons and makeshift kites, set fire to thousands of arable acres on the Israeli side and turned the lives of hundreds of thousands of civilians into a constant nightmare.

Global attention, which has long drifted away from Gaza and the Palestinian issue at large, seemed to have reawakened. Egypt, Qatar and the UN special representative redoubled their mediation efforts. For the first time, Netanyahu’s government started signaling willingness for a wider agreement with “the terror organization Hamas” as it is unequivocally called in all official statements. The main rationale given for the possible policy shift was the need to focus all military efforts on the Northern front, namely Iran’s military entrenchment in Syria. Yet another rational is political. Long before Lieberman’s resignation, the current government began a process of disintegration, with key ministers exchanging harsh accusations in preparation for future elections. Netanyahu himself is facing near-certain criminal charges in multiple cases and is in desperate need for maximum stability on Israel’s borders.

All told, the recent short violent outbreak ended rapidly in military terms, but its political ramifications have just begun. The right wing is showing new signs of dissatisfaction with Netanyahu, and new alliances between members of the coalition and some in the opposition are emerging, with a view to the next, possibly post-Netanyahu government. None of Gaza’s fundamental problems were even seriously discussed, let alone resolved, during recent months. A small infusion of Qatari cash and diesel enabled upgraded electricity supply and carefully-targeted handouts to Hamas supporters. The conditions for a long-term ceasefire were not met, and overall circumstances remain highly fragile. With early elections in Israel expected to be slated for the first half of 2019, Gaza and Israel might very well both be on fire again fairly soon.

Eran Etzion is currently an independent policy entrepreneur and strategist. He served as Israel's Deputy National Security Advisor and Head of Policy Planning in the Ministry of Foreign Affairs.