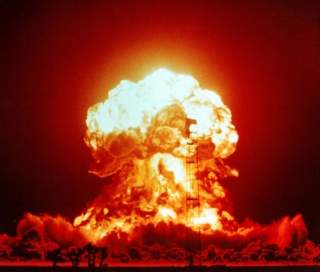 May 5 of this year was Holocaust Remembrance Day, or Yom Ha'shoah. Appropriately, the central message of this uniquely somber day is "never again." But it is every day that Israel, as the institutionalized form of the Jewish surviving remnant, must interpret this message on another level. Israel must remember the Holocaust not only to memorialize the past, but also to protect a still-uncertain Jewish future.

Israel faces a complex and multilayered responsibility. The tiny country's sacred obligations now extend far beyond offering protection to diasporic Jews against any traditional genocide, to assuring its own survival as a durable and separately sovereign state. The almost unbearable question, "Can Auschwitz return?" must now be examined more broadly than in the narrowly literal interpretation.

At present, the most plausible threat of "a second Auschwitz" is not from any expected attempts to round up individual Jews in different parts of the world, and bring them to the gas chambers. Nor is it from any Jihadist terror that is focused on Jewish civilian populations, whether in Israel, Europe or the United States. Rather, the most fearful and conspicuous exterminatory threat to Jews is from enemy acquisition of nuclear bombs, and from certain conceivably corollary preparations to shower such lethal "gas" upon the whole of Israel.

Left to themselves, it is easy enough to imagine some of Israel's potentially nuclear adversaries could bring the Jewish state (we may think of Dante) into eternal darkness, fire and ice. It is plain, therefore, that the country's leadership should soon take all appropriate steps to ensure that any identifiable failure of national deterrence would never spark a nuclear attack. In this connection, it is especially important for the Israel Defence Forces (IDF) to continue to plan conceptually and operationally around the following absolutely core understanding:

Nuclear war in the Middle East is no longer out of the question. This is the case, moreover, even if Israel were somehow to remain the only nuclear weapons state in the increasingly chaotic region. How is this possible?

Significantly, a bellum atomicum could arrive in Israel not only as a bolt-from-the-blue enemy nuclear missile attack, but also as a result of escalation. If, for example, certain Arab/Islamic states were to begin hostilities by launching conventional attacks upon Israel, Jerusalem could decide to respond, sooner or later, with thoughtfully calculated and correspondingly graduated nuclear reprisals. Alternatively, if these enemy states were to commence conflict by releasing large-scale conventional attacks upon Israel, Jerusalem's conventional reprisals could then be met, sometime in the not-too-distant future, with particular enemy nuclear counterstrikes.

If it hadn't been for Israel's earlier preemptive operations against both Iraq and Syria (Operations Opera and Orchard, respectively), the Middle East could already have been rife with Arab or Islamist nuclear forces. Looking back upon these specially focused expressions of national self-defense, Israel had then effectively ensured that such assorted terror groups as ISIS, Al Qaeda, Hamas and Hezbollah would not now be nuclear. In fact, the still generally unrecognized benefits of these extraordinary operations have impacted not only Israel, but also the United States and its allies that are fighting Jihadists in a rapidly disintegrating theatre of conflict.

The regional future, however, is apt to be even less secure. For one thing, with a potentially nuclear Iran the derivative risks of nuclear terrorism could become intolerable. Some of these newer risks might not stay contained to the Middle East. Instead, in some form or another, they could carry over to the scarcely protected American and European homelands.

However, by planning ahead, and by maintaining a maximally credible conventional deterrent, Israel could reduce its exposure to any eventual nuclear war fighting. A fully persuasive Israeli nonnuclear deterrent, at least to the extent that it would prevent enemy conventional attacks, could expectedly lower Israel's overall risk of any escalatory vulnerabilities to nuclear war. In the impressively arcane lexicon of nuclear strategy, this means that Israel could likely reap considerable security gains by staying in conspicuously firm control of “escalation dominance.”

Such gains could turn out to be genuinely existential. They could actually serve to prevent a second Auschwitz.

But why should Israel require a conventional deterrent at all? Wouldn't its nuclear deterrent alone, whether still ambiguous, or perhaps more expressly disclosed, reliably deter any and all national aggressions? Wouldn't all enemy states, at least those that were determinedly rational, resist launching just conventional attacks upon Israel?

This reasonably presumed reluctance would stem from a determinably well-founded fear of Israeli nuclear retaliation.

Here is something complex to consider. Aware that Israel would cross the nuclear threshold only in highly unusual and threatening circumstances, enemy states could remain convinced that as long as their initial attacks were to stay merely conventional, Israel's expected response would remain similarly nonnuclear. It follows, by deliberately calculated inference, and also according to the well-documented history of Israel's major and minor wars, that the only way for Israel to successfully deter a large-scale conventional war must be by maintaining large scale and secure conventional force capabilities.

Yet, some further and noteworthy strategic nuances still warrant special mention. Any rational Arab or Islamic enemy states considering first-strike attacks against Israel using chemical or biological weapons would likely take much more seriously Israel's nuclear deterrent. This suggests that a strong conventional capability will still be needed by Israel to deter or to preempt certain anticipated conventional attacks, imaginable strikes that could quickly lead, perhaps via starkly unpredictable escalations, to some form of unconventional war.

Ironically, for Israel, even the "successful" fourth possibility could prove catastrophic.

This sober reasoning should bring to mind the closely related matter of Israel's "bomb in the basement," or deliberate nuclear ambiguity. The credibility of Israel's still hidden or opaque nuclear deterrent must depend, in some measure, on the perceived usability of its nuclear arsenal. Should Israel's own nuclear weapons be perceived by prospective attackers as very high-yield, inherently indiscriminate, city-busting (counter-value) weapons, rather than as minimal-yield, "war-fighting" (counterforce) weapons, may not deter.

Going forward, this means that Israel's nuclear deterrent will require not only recognizably secure second-strike forces, but also weapons that could reasonably be used in war. It also implies that any continued Israeli policy of "deliberate ambiguity" could encourage certain erroneous calculations by prospective attackers. On one occasion or another, such an outdated and unsystematic policy could fully undermine Israel's nuclear deterrent.

In the very worst case scenario, such a policy could effectively invite a second Auschwitz.

In all matters of Israeli nuclear deterrence, it must never be overlooked that enemy perceptions will be most important in Jerusalem. By insistently keeping its nuclear doctrine and capacity in the "basement," Israel could unknowingly contribute to an impression among regional enemies that its nuclear weapons are not operationally usable. In these fully believable circumstances, certain increasingly recalcitrant enemies, now unconvinced of Israel's alleged willingness to actively employ its nuclear weapons, could accept the presumed cost-effectiveness of striking first themselves.

For Israel, this would not be a sustainable condition. It could also represent an "Auschwitz II" scenario.

For any enemy aggressor, this sort of acceptance could well be an irremediable error. Nonetheless, it could prove equally devastating to Israel. Here, in other words, and as a direct result of specific enemy miscalculations, everyone would still lose.

In tangibly human terms, what precisely would this thoroughly generalized loss mean? To begin, if aggressor states were correct in rendering just such a calculation, Israel could then be overrun. If these states were incorrect in their reckoning, all states in the region, including Israel, could then suffer the grievous consequences of multiple nuclear weapons detonations. Within the directly affected areas, thermal radiation, nuclear radiation, and blast damage could generate utterly unprecedented levels of death and devastation.

For anything new to be born out of such widespread destruction, a determined gravedigger would need to use forceps.

A nuclear war would not respect political boundaries. Because of the particular manner in which nuclear explosions behave in the atmosphere, the altitude reached by the mushroom-shaped cloud would depend primarily upon the force of the explosion.