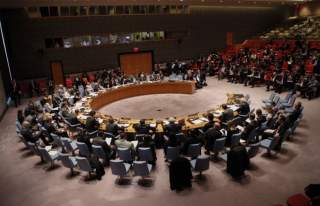 From the refugee crisis in the Middle East and North Africa, to the recruitment of Westerners and others to join ISIS in Iraq and Syria, around the world, people are on the move. Here at home, debate rages over whether to build more fencing along the Southern border to prevent mass economic migration. And once again, global health agencies are grappling with limited information on travelers to and from parts of West Africa as they respond to the surprising rise in Ebola cases in Sierra Leone. These seemingly disparate phenomena share a common thread:  They arise from the longstanding inability of countries to manage their borders.

Today, borders have never been more relevant to global security and economic prosperity—and yet they are being woefully mismanaged, with countries making poor choices in response to current challenges. Recent history makes clear that security and prosperity are not achieved by reflexively building barriers between nations in the midst of a crisis. Following the functional closure of its borders on September 11th, the U.S. determined that it needed to reverse course and adopt smart border policies that increased security while facilitating lawful travel and trade. This philosophy has persevered, even as the terrorist threat has arguably grown.

Borders naturally have two sides. As we are seeing in Hungary and on our own border with Mexico, progress made to secure one side of the border can be eroded by the inability or unwillingness of the country on the other side to reciprocate. The same is true in countries adjacent to conflict zones.  Terrorists and criminals can subvert unilateral border measures. Mass migrants simply overwhelm them. Europe’s common perimeter involves dozens of countries–if one fails to pull its weight, then the entire border is compromised.  If multiple countries fail to pull their weight, the border collapses with negative consequences for countries and refugees.

To meet the challenges posed by global travel, economic migration, and the flow of refugees, therefore, international cooperation and a tangible commitment by all countries to implement border management “best practices” are essential. Admittedly, this is a tall order, especially because there is no central organization to spearhead such an effort. Relevant international bodies–the World Customs Organization, the International Maritime Organization, the World Health Organization and the International Civil Aviation Organization–have a role. But these entities approach the border with narrow missions and cannot enforce standards that address the multiplicity of border challenges to health, security, trade, and travel.

If we are going to enhance global security and economic growth through better border management practices, it is going to require leadership at the United Nations. Although there are ample reasons for skepticism, the UN has proven to be competent in leading international efforts in a number of related areas. Every year the UN feeds more than 100 million people in 80 countries. Year after year, it provides the only hope for millions of refugees. And it has worked tirelessly to reduce infant and child mortality, fight HIV/AIDS, and keep the peace in conflict hotspots in Africa and around the globe. Improved border management could support each of these efforts and contribute more widely to international peace and prosperity.

As part of the UN Global Counterterrorism Strategy, the Security Council has begun to carve out a role for itself in 21st century border management.  Indeed, the Council has explicitly called upon countries to improve their border management capabilities in order to address the threats posed by foreign terrorist fighters, going so far as to call upon all States to prevent the movement of terrorists or terrorist groups by implementing effective border controls, accelerating the exchange of operational information, and developing collaborative approaches to managing cross-border threats. These are worthy, but insufficient, steps—it is time for the UN to lead. The Security Council should use every tool at its disposal for engaging the international community in a coordinated effort to improve border management—celebrating first movers and leaders, offering technical and capacity building assistance to those countries that need it, and publicly shaming laggards and countries unwilling to do their part.

The world is watching fences go up, European unity shatter, boats capsize, ISIS and al Qaeda recruit Western youth, and refugees flee Syria. The Council must step up and fulfill its mandate:  Advise countries on better border management, help them implement best practices, and make sure that they finish the job.

Brian Goebel is Chairman of Sentinel and Strategy Policy Consulting, LLC. Brian Finlay is President and CEO of the Stimson Center.