Is It Time for America and Afghanistan to Part Ways? 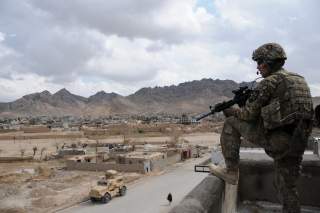 The war in Afghanistan has been going on for such a long period of time that it’s almost become a ritual for a new administration to take a bottom-up, comprehensive look at America’s war strategy during its first two months on the job. The movie has been repetitively played over the last decade and a half: the generals running the war are ordered by the new president and his national security adviser to assess whether the plan is working; the generals conduct the review, which usually concludes with the commanders requesting more U.S. troops on the ground; and the administration (with varying degrees of resistance) eventually provides the commanders the authority and resources that they have forwarded to the White House. President Obama was a bit of anomaly in this regard. He did, after all, set a timeline for troop withdrawals that the Pentagon wasn’t especially pleased about. But even Obama authorized nearly fifty thousand additional American troops into the conflict during his first year in office.

President Donald Trump is continuing this movie. He recently sent National Security Advisor H. R. McMaster on a two-day trek to Afghanistan to determine whether the strategy, or the means of accomplishing that strategy, is in need of fine-tuning. McMaster met with Afghan president Ashraf Ghani, Chief Executive Abdullah Abdullah and senior Afghan security officials during his trip. He had nothing but kind words for the Afghan leadership during television interviews. “In recent years, at a period of our maximum effort, we didn't have as reliable a partner in the Afghan government as we would've liked,” McMaster told ABC’s This Week. “Now we have a much more reliable Afghan partner and we have reduced considerably the degree and scope of our effort.”

The Trump administration has said very little about the longest war in American history. News about Afghanistan is hardly reported from the mainstream media; people have either lost interest in the conflict altogether or have simply come to the conclusion that the intricacies of tribal politics in the country are so difficult to understand that you need to have a PhD in sociology to grasp the constantly shifting alliances and ethnic power struggles. McMaster is one of most knowledgable and celebrated Army officers of his generation, but even he doesn't have the bandwidth.

Everybody has ideas and concepts for what the United States can do to salvage a war that is going in the wrong direction for Washington’s Afghan allies. Former U.S. Ambassador to Afghanistan Ronald Neumann, former commanding Gen. David Petraeus and former diplomat Earl Anthony Wayne recently wrote that whatever the Trump administration does, it must take a holistic perspective. The trio suggested that the administration stay far away from the annual policy reviews that have dominated past U.S. administrations. Instead, the Trump administration should create an “integrated multiyear strategy that presents a sustainable way forward,” they said. What that strategy might be is in the eye of the beholder.

In many ways, Neumann, Petraeus and Wayne are absolutely right: the United States would be served well with a honest assessment about how to turn the situation in Afghanistan around. But yet another review from yet another administration would be akin to going through the motions if U.S. officials continue to put hubris and hope above realism and history. If the past sixteen years of war have told us anything, it's that even the mighty United States of America cannot mold a nation in its own image or instill a set of democratic principles within a society like Afghanistan, which has run on tribalism, parochialism and corruption for centuries. McMaster may be adamant that the Afghan Taliban must be defeated for there to be long-term peace and reconciliation in Afghanistan—one has to admire the general’s “can-do” attitude. But it would be an enormous mistake for U.S. officials working on the Afghan file to use McMaster’s words as an excuse to cease asking the tough question that has been buried underneath all of the debates about American troop levels: when is enough, enough?

There is about as much chance of President Trump withdrawing all American military personnel from Afghanistan as Steve Bannon waking up one morning and embracing “globalism.” Republican hawks like John McCain, Marco Rubio and Tom Cotton would view a full withdrawal—indeed, any withdrawal—as an act of appeasement that will produce impacts even worse than Obama’s premature withdrawal of surge troops in 2011. And there are very good arguments against leaving Afghanistan completely. But if Trump is genuinely committed to shaking up Washington’s foreign-policy establishment and thinking outside-the-box, then he must at least ask the same question that a world-class businessman never ceases to ask when a business transaction starts to get wobbly: is it time to decrease an investment that is showing very little returns? If the answer is “yes,” then is it time to recalibrate our investment strategy and shoot for a safer bet with lower returns?

These questions are undeniably uncomfortable for many in the U.S. military, State Department and intelligence community who have dedicated years to Afghanistan in order to provide it with a future that is more stable, an economy that is more resilient and a political system that actually works for the Afghan people. But however uncomfortable the questions might be, it’s time to get real.