It Is Time to Debate—and End—Identity Politics 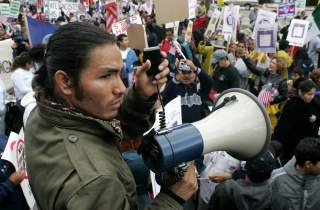 America’s partition into mutually antagonistic identity groups has reached every nook and cranny of society, from sports to education, the corporate world and politics. It has never been openly debated or voted on by the American people, however.

Identity politics sparks emotional reactions both among its supporters and its detractors because it deals with the larger issues of our day. It is about what convinces people to band together in society and to agree to a common project.

Academics on both sides have spoken past each other, but Americans have never had a political debate on it. For that to happen, politicians on opposing sides would have to debate each other with specifics.

Yes, Donald Trump and Hillary Clinton presented broad opposing views on identity politics in 2016—she for it, he against it—but there was no discussion of what it is, how it came about, whether it is a good or bad thing and, if the latter, how to end it.

It’s time to correct this oversight and have that political debate now. Identity politics is a new animal. It is very different from Martin Van Buren knowing how to secure the Dutch vote in the Hudson Valley, or Boss Tweed getting the Irish to vote Democrat.

It instead looks at America through a post–modernist lens of power struggles among groups based on race, ethnicity or sex, but where the individual loses agency. It resegregates America into subnational “protected” groupings whose members receive benefits simply as a consequence of group membership and in whose name self-appointed leaders demand unequal treatment. How this backdoor return to Plessy era distinctions has gone without argument is a major victory of the left that often goes unrecognized.

This is a view of America that diametrically opposes the “We Are All Created Equal” position. The two may be irreconcilable. It may very well be that, just as the country was not large enough in 1860 to encompass the master blueprints of slavery and abolition, America today cannot house these two opposing blueprints. One or the other must win in the (peaceful) marketplace of ideas.

John Locke and those he influenced—which includes the Founding Fathers of America and, two-and-a-half centuries later, the enemies of identity politics—are convinced to leave the state of nature and create a society by their mutual need to secure natural rights. One of the most basic of those rights is that we’re all “born free and equal,” in the words of the Massachusetts Bill of Rights.

Around these principles there emerged in the United States a creed and a culture which formed “One People.” Immigrants were expected to assimilate into such an overall national culture (which had geographic pockets to be sure), accept the creed and adapt to civic life.

To the supporters of identity politics, what causes Americans today to band into subnational clans is the need to tear down “structural racism” and the hegemony of white, male, able-bodied heterosexuals. And to advocates of identity politics, it was Lockean thought and the Founding Fathers’ creed and culture that produced white dominion.

As Courtney Jung, one of the leading thinkers of identity politics, once said, “One’s ability to get oneself heard in a democratic system crucially depends on whether one can claim membership in a group with a preexisting political weight, or forge a group identity with new political weight. In contemporary politics, race, gender and ethnicity have developed such a weight.”

Moreover, according to Stanford’s Encyclopedia of Philosophy’s entry on equality, “There is a danger of (strict) equality leading to uniformity, rather than to a respect for pluralism and democracy. In the contemporary debate, this complaint has been mainly articulated in feminist and multiculturalist theory.” Citing various studies, the entry says, “‘Equality’ can often mean the assimilation to a pre-existing and problematic ‘male’ or ‘white’ or ‘middle class’ norm. In short, domination and a fortiori inequality often arises [sic] out of an inability to appreciate and nurture differences—not out of a failure to see everyone as the same.”

Some Americans believe that the current division of their country into ethnic, racial and sexual groups (Hispanics, Asians, gender) responds to a grassroots desire to seek dignity and that such a dispensation was arrived at after transparent and political debate.

They would be very wrong on both counts.

Identity politics began under cover of darkness about four decades ago. It, too, had its founding fathers: militants who were influenced by the Marxist thinking then starting to sweep U.S. universities. They intimidated those administrators who didn’t already agree with them into forging the new group identities of which Jung speaks, and divided Americans in the process.

All three founders of La Raza, a group that had an oversized influence on the creation of the Hispanic identity, were steeped in militancy. Herman Gallegos learned community organizing from the 1960s radical Saul Alinsky. Ernesto Galarza, the “dean of Chicano activism,” was an organizer with the United Farm Labor Movement who also went to found La Raza Unida, and paved the way for the work of Cesar Chavez, with whom he collaborated. Finally, Julian Samora, known as the father of Latino Studies, was influenced by the culturally Marxist Frankfurt School.

Angela Davis, the Black Panther who spent time in prison in the 1970s and who teaches about multiculturalism today, was herself taught by another Frankfurt School luminary, Herbert Marcuse, of whom she said, “Herbert Marcuse taught me that it was possible to be an academic, an activist, a scholar, and a revolutionary.” Yuji Ichioka, the radical Berkeley student who first coined the term “Asian-American,” was another Marxist enthusiast. He founded the Asian-American Political Alliance, an organization philosophically influenced by the works of Chairman Mao and the Black Panther movement.

These activists and administrators confected the groups we have today—such as Hispanics, Asians, Pacific Islanders, or the MENA designation President Barack Obama had intended to create for Americans originating in the Middle East and North Africa until President Trump’s administrators stopped it.

But no one voted on this, and the people who were directly affected—those being shoehorned into such groups—were initially reluctant. The record on this is long. For example, take a report written by a University of California at Los Angeles activist in the late 1960s which stated: “Indeed, merely calling Mexican Americans ‘a minority,’ and implying that the population is the victim of prejudice and discrimination has caused irritation among many.” Another instance is a debate that the Census Bureau hosted in 2015.

In his history of the era, the Minority Rights Revolution, University of California San Diego Professor John Skrentny vividly depicts how top-down and undemocratic the genesis of identity politics was. The true iconic images of the era, he wrote, were “mostly not of angry minority protests, raised fists, picket lines, and placards. The images of the minority rights revolution are mostly of mainstream Euro-American males and minority advocates, wearing suits, sitting at desks, firing off memos, and meeting in government buildings to discuss new policy directions.”

“While these are not romantic images, they are the images of power,” adds Skrentny.

And therein lies the rub. Power shoved down the people’s throat is being rejected here and in Europe, especially on this issue of identity. Whether you’re pro-Trump or Never-Trump, this is not a moment that can be ignored or swept away.

On the issue of what constitutes a nation, a Socratic dialogue would turn on what binds people together for a common purpose. What convinces people to form a nation? The philosopher Leo Strauss made a bona fide case that the Founding Fathers were in a state of nature, and then went on to forge the nation “to secure the blessings of liberty to ourselves and our posterity,” in the words of the Constitution.

And who made this claim? “We the people of the United States, in order to form a more perfect union.” In other words, one nation made up of individuals.

In contrast, what the other side has to offer is an arrangement by different identity groups to engage in power-sharing and collaborate in the public sphere, while returning to their respective primal attachments at night. This is what Samuel Huntington described as, “An association of racial, ethnic, and cultural subnational groups held together by the hopes for the material gains that can be provided by a healthy economy and a compliant government.”

Can a free society long endure that arrangement? John Stuart Mill, observing the cosmopolitan, multicultural Habsburg Empire of his day, does not believe it can. “Free institutions are next to impossible in a country made up of different nationalities,” he said. “Among a people without fellow-feeling, especially if they read and speak different languages, the united public opinion, necessary to the working of representative government, cannot exist.”