It Is Time for Trump to Rethink the One-China Policy 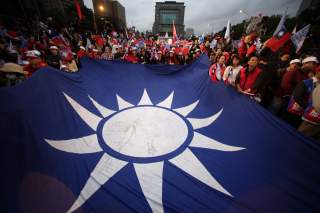 Taiwan has lost yet another diplomatic ally, with Burkina Faso cutting ties with the island. That news coincided with China’s dis-invitation from America’s Rim of the Pacific Exercise and the cancellation of the summit between United States President Donald Trump and North Korean leader Kim Jong-un, making Burkina Faso’s abandonment of Taiwan seem inconsequential by comparison. After all, Taiwan’s unofficial relationship with the United States is far more valuable to Taipei than are its formal diplomatic partners. Furthermore, Burkina Faso is a relatively small and impoverished country that provided Taiwan nearly nothing of value aside from diplomatic recognition. However, China has been campaigning to get as many countries as possible to break diplomatic relations with Taiwan and Burkina Faso is another victory for Beijing.

This makes Burkina Faso’s decision as just the latest in a series of Chinese measures designed to isolate Taiwan and, more specifically, to reduce the potential for foreign interference in Beijing’s designs on the island. In addition, China seeks to convince Taiwan’s people that resistance is futile, to add further strain on Taiwan’s military hardware, and to turn Taiwan’s population against the ruling Democratic Progressive Party.

In order to achieve these goals, China has been carrying out a concerted pressure campaign on the island since Tsai Ing-wen’s election to the presidency in 2016. That campaign has featured a variety of coercive tactics, including military exercises, economic warfare, domestic political interference, psychological warfare, the theft of diplomatic allies, and the exclusion of Taiwan from international forums.

There is little reason to believe this pressure will relent any time soon. The Chinese leadership has likely concluded (correctly) that un-coerced unification is not in the cards. That conclusion has coincided with Xi Jinping’s “China Dream” promises, of which unification is an important part. With China potentially entering a period of prolonged economic stagnation, Taiwan may only grow in importance to Xi as he seeks to deliver “national rejuvenation”—and maintain his grip on the reins of power.

There are plenty of things the United States can do to shore up stability in the Taiwan Strait in the face of sustained hostility from China. Bilateral military exercises, regular arms sales, and a bilateral free trade agreement would all be useful. In the near-term, President Trump should send a cabinet-level official to speak at the opening of the new American Institute in Taiwan facility in Taipei, scheduled for June 12, if his summit with Kim Jong-un is definitively canceled or postponed. If the summit does not go forward on the twelfth, Trump will no longer need to worry about keeping all eyes focused on his meeting with the North Korean leader. Even if the North Korea meeting does occur as originally scheduled, President Trump should at least send a prominent assistant secretary to mark the occasion in Taipei.

It may be time, however, for Washington to think bigger.

On December 2, 2016, not long after his election victory, Donald Trump accepted a congratulatory phone call from Tsai Ing-wen, breaking with decades of precedent. In the weeks that followed, the American president called into question the “one China” policy on two occasions, positing in early January 2017 that “everything is under negotiation, including ‘one China.’” Although the suggestion that America’s relationship with Taiwan might be used as a bargaining chip in negotiations with Beijing was troubling, Trump’s questioning of orthodoxy was not without merit.

China’s unceasing pressure on Taipei is unsettling stability in the Taiwan Strait, potentially in dangerous ways. Over the past decades, China’s increasing hostility coupled with domestic political changes in Taiwan (democratic reform) and China (a return to one-man rule) have made it reasonable to question whether the one-China policy continues to serve American interests.

As such, President Trump should direct the National Security Council to launch an inter-agency review of the “one China” policy. How does the policy hurt and benefit China, Taiwan, and the United States? Is strategic ambiguity effective in contributing to cross-Strait stability? Does the United States have better means at its disposal to ensure Taiwan’s continuing de facto independence and peace in the Taiwan Strait? What are the alternatives to the “one China” policy and to the current nature of America’s unofficial ties to Taiwan? How might Taipei and Beijing react to a potential change in the “one China” policy—would Taiwan be receptive and might China resort to force?—and what steps might the United States need to manage the fallout?

It may well be the case that the “one China” policy provides the best—or, perhaps, the least bad—framework in which Washington can effectively engage with both Taipei and Beijing. But for President Trump to even pose these questions is to put China on notice that, thanks to its relentless harassment of Taiwan, it is playing with fire in the Taiwan Strait. Absent the threat of a serious burn, Beijing will keep lighting matches, risking a greater conflagration from which no one will benefit.

Michael Mazza is a research fellow for Foreign & Defense Policy at the American Enterprise Institute where he focuses on U.S. defense policy in the Asia-Pacific region.