It Was Inevitable That Trump Would Fire James Comey 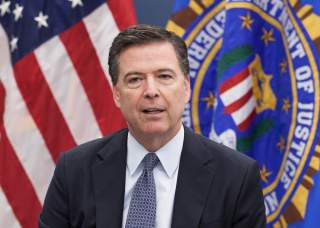 It was probably inevitable that Donald Trump would fire FBI Director James B. Comey. The surprising thing may be not that Trump terminated him today, but that Trump waited as long as he did. Comey has repeatedly displayed lamentably bad judgment. The question that those outside of Washington may wonder about is whether anyone can shoot straight in this town. Institution after institution has come into disrepute because of bungling by top government officials. Comey’s missteps are not an aberration, but part of a broader pattern in Washington.

Trump declared, “While I greatly appreciate you informing me, on three separate occasions, that I am not under investigation, I nevertheless concur with the judgment of the Department of Justice that you are not able to effectively lead the bureau.” Deputy Attorney General Rod Rosenstein was right to say that Comey brought discredit upon the FBI by publicly discussing the investigation of Hillary Clinton during the campaign. Trump called the FBI the nation’s “crown jewel” of law enforcement and said he would move to restore its reputation.

Comey won plaudits during the Bush administration for standing up for civil liberties when Attorney General John Ashcroft was hospitalized and White House counsel Alberto Gonzales and chief of staff Andrew Card tried to bully Ashcroft into signing on to approving sweeping NSA spying. Comey raced to the hospital and stood them down.

Since then, however, Comey, who prides himself on a reputation as a straight arrow, has committed mistake after mistake. His most egregious recent move made headlines this week, when it was revealed that Hillary Clinton aide Huma Abedin had in fact sent classified material in the form of not hundreds, but thousands, of emails to her husband Anthony Weiner’s computer. This was a shocking mistake on the part of Comey, one that is bound to further fuel conspiracy theories about the outcome of the election.

On the Russia investigation, Comey has also engaged in questionable actions. He was the head of the FBI. Yet he went beyond his purview in testifying to Congress. He made claims on the order of stating that Russia is the “greatest threat” to the United States. It isn’t the job of the FBI director to indulge in geopolitical analysis. Anyway, how would he know? Comey, who has devoted his career to domestic legal matters, has never evinced any deep or profound knowledge of foreign countries. His testimony to Congress, in fact, has mostly consisted of banalities and conventional wisdom repackaged as cutting-edge analysis based on secret information. But as George F. Kennan once noted, the average citizen who reads the New York Times knows as much, or even more, than many government officials. There is no cogent reason to believe that Comey possessed any great insights that were occluded to most Americans. Quite the contrary. His hapless, serial bungling suggests that he was totally out of his depth as FBI director.

The question for Trump will be whom he chooses to replace Comey. Given that the Russia investigation was given fresh wind by the testimony of Sally Yates on Monday, Trump needs to pick a serious and credible candidate to lead the FBI. Senator Lindsey Graham, who could not be more hawkish on Russia, stated, “Given the recent controversies surrounding the director, I believe a fresh start will serve the FBI and the nation well. I encourage the President to select the most qualified professional available who will serve our nation’s interests.” Already Senator Ron Wyden is calling on Comey to testify in an “open hearing” about the status of the Russia investigation when he was sacked. It’s unlikely that that Comey would disclose anything. But the optics of the Russia investigation have always been more important than the substance.

The stakes for Trump, who has repeatedly inflamed rather than defused the Russia investigation with his truculent tweets, could not be higher.

Image: FBI Director James Comey during a press briefing regarding the shooting at a nightclub in Orlando. Wikimedia Commons/Public domain