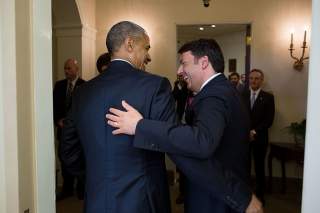 President Obama will leave the White House with solid approval ratings. But it is hard to use popularity to help others. In the 2016 elections, the president could not tip the balance in Hillary Clinton’s favor. On the international level as well, another beneficiary of strong White House support just suffered an unexpectedly harsh defeat.

Italian Prime Minister Matteo Renzi had been a darling of the international community since early 2014, when he wrested the leadership of the Italian government from Enrico Letta, a fellow member of the moderate left Democratic Party. Renzi had become head of the party two months earlier. Even leaders of other European Union countries, where skepticism and cynicism about Italy are the norm, recognized Renzi as a reformist who offered the best chance of countering the rise of populism, most notably the Five Star Movement, which had won over 25 percent of the vote in the February 2013 legislative elections.

President Obama had been seeing a lot of Renzi. In April of last year, for example, Renzi visited Washington and, after their meeting at the White House, the president was positively effusive in praising Renzi’s leadership. A few weeks before our presidential elections, Renzi was back for a state visit, including the Obamas’ last state dinner on October 18. Once again the president praised Renzi for “the energy and the optimism, the vision and the values that can carry Italy, and Europe, forward.“

The timing of the state visit was striking. The announcement came in September, by which time Renzi already had been locked, for several months, in a fight for his political life over the referendum. The proposed changes to the Italian constitution were intended to strengthen governability and executive authority. Indeed, the frequent turnover of Italian governments does result in part from quirks in Italy’s postwar constitution. But it was hard to see a compelling U.S. interest in supporting Renzi’s specific reform package. In any case, the referendum became a vote on Renzi, who speedily accepted responsibility for the defeat and said he would tender his resignation. The victory of the “No” voters, including the populists, thus is likely to result in new parliamentary elections, with both the timing and the outcome uncertain.

As a U.S. Foreign Service Officer, I had the great pleasure of serving twice at the U.S. Embassy in Rome, ultimately as the senior officer in charge of political affairs. When elections were on the horizon, or political waters were otherwise agitated, it was customary for Italian politicians to come and seek some sort of U.S. seal of approval. By the time I first served in Italy (in the 1980s), we had stopped giving such political blessings. This became especially important after the end of the Cold War, as new political forces, both from the left and from the right, became fully legitimized players in the political system. The state visit for Renzi and the strong Obama endorsement on the eve of a referendum with such high stakes for the Italian leader, frankly, surprised me.

But more significant going forward is that fact that the president’s strong endorsement did not help Renzi. There are some lessons here. The incoming president would do well to accept that even a U.S. leader with very high international popularity no longer can make a difference simply by distributing or withholding a seal of approval. Also, voters abroad, as well as in the United States, are not waiting for the word of the president or a favorite entertainer (even Beyoncé) before making up their minds. They make decisions based on perceptions of, and feelings about, the political, economic, social and cultural contexts in which they live.

Eric R. Terzuolo is a past contributor to The National Interest, and has drawn in part on his twenty-plus years as a U.S. Foreign Service Officer. He served twice at the U.S. Embassy in Rome, ultimately as Minister-Counselor for Political Affairs. While in Rome as a private citizen in 2005-2010, Eric taught international affairs courses at the University of Rome. Since 2010, he has been on contract to the Foreign Service Institute, the Department of State's professional training unit, with responsibility for West European area studies. The views expressed, however, are entirely his own.