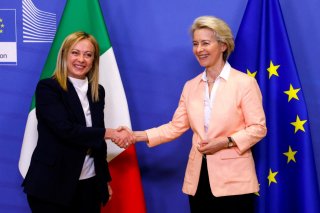 The victory of Giorgia Meloni’s Fratelli d’Italia seemed to be a lightning rod for concern across the transatlantic community before her government was even out of the starting blocks. Now, weeks after the election and after assessing all the things she has said, things might be looking differently from commentators’ initial views.

Without a doubt, the Italian elections deserved attention. The hype surrounding the election of a “Far Right” government naturally raised concerns about Italy’s future role in the transatlantic community. However, from the beginning, Meloni has been clear that Italy would stay committed to the pillars of the European Union and the West against autocratic governments such as Russia and China. She has been vocal in her support for Ukraine, which stands in stark contrast to the more ambiguous positions of Forza Italia’s Silvio Berlusconi and Lega’s Matteo Salvini. Her personal position has been firm even though some voices among her government’s coalition partners have expressed sympathies for Putin and criticized the EU. The key takeaway is to listen to what Meloni says and not what others say about her.

Following Mario Draghi, one the most constructive transatlanticists in Europe, will not be easy, but this does diminish Meloni’s established position as a staunch Atlanticist. Similarly, her new foreign minister, Antonio Tajani, the former president of the European Parliament and one of the strongest transtatlanticists in Europe, stated recently to Antony Blinken that the United States is Italy’s best friend in the world. Meloni has been clear that her government will remain aligned with its European and transatlantic allies. Her support for Ukraine while holding Russia accountable for the war has been unambiguous.

In her first call with President Joe Biden, the two leaders stressed the importance of transatlantic partnership while underlining the strong relations between the United States and Italy. So too was her support to strengthen relations in light of growing challenges to Western democracies. Beyond Meloni’s personal statements, her Fratelli d’Italia party, along with center-right coalition parties Lega and Forza Italia, voted in favor of supplying armaments to Ukraine. This is important because at the time only 38 percent of the Italian public voiced similar support compared to other Western countries where the support ranged from 58 to 80 percent. Similarly, her party supported admitting Sweden and Finland into NATO. All the while, Meloni has repeatedly stressed her support for sanctions against Russia.

Staying true to her position when considering Italian public opinion may be difficult. Italian public opinion has shown, on more than one occasion, a certain sympathy for Russia and its narratives and views on the war in Ukraine. This may be explained by Russian subtle disinformation campaigns or even transference of resentment towards the EU. It was not long ago that many Italians felt abandoned by the EU during their early front-line battle with the Covid-19 pandemic. The same can be said for the lack of EU support as Italy received wave after wave of illegal migrants. While things have improved, bad memories linger.

At the strategic level, Meloni needs to be pragmatic in order to deal with Italy’s economic recession and avoid political isolation. Suffering a triple economic recession since the 2008 economic crisis, Italy is the only G7 country that has seen worsening living standards. According to the International Monetary Fund, in 2022, the income per capita of average Italians was less than $34,000 as compared to $41,000 in 2008. The effects of this slide are tangible and felt throughout the country. The weight of the Italian economy in the global one has shrunk from 3.3 percent in 2000 to less than 1.9 percent in 2022.

Governing at home will be Meloni’s most pressing challenge. Italy’s many economic challenges require immediate attention. Fixing structural issues to help jump-start its economy is imperative. Italy’s recently adopted reform and investment program and the National Recovery and Resilience Plan need serious unwavering commitment and follow through. Success in meeting target objectives will fix foundational structural challenges from the digitalization of the Italian economy and green transition to job creation and social resilience. At 191 billion euros, Italy received the biggest slice of the EU’s Next Generation economic recovery package. It cannot waste this opportunity.

And then there is China…

Italy, like many European countries, fell victim to Chinese seduction. In the aftermath of the 2008-2009 financial crisis, Chinese investment in Italy saw a massive increase. Chinese acquisitions targeted both big companies and small and medium enterprises in search of technologies, innovation, and markets. In 2019, Italy signed a comprehensive Memorandum of Understanding with China, becoming an official member of the Belt and Road Initiative (BRI), the first and the only G7 country to do so. The then government hoped that membership in the BRI would open new opportunities for trade and investment, a narrative that at the time resonated well with the public but has not paid off.

At the same time, China’s considerable propaganda machinery was at full throttle. Carried out through diplomatic and social media campaigns. China painted itself as a friend and savior while stirring up animosity towards Italy’s traditional allies. With political discourse driving public perception, the initial Italian sentiment proved favorable to China.

Although it is true that Sino-Italian trade has increased over the last two decades, it has been decidedly in Beijing’s favor with China exporting more than twice the volume of imports that it receives from Italy. Italy’s roughly $19 billion in exports to China pales when compared to the more than $45 billion in Chinese imports, making China the third-largest import partner. While Italy is becoming flooded with Chinese products, Italian exports to China make up only 3 percent of its total exports. Clearly, Italy’s optimism for the BRI didn’t go as planned.

When it comes to Chinese transgressions, Meloni has been a vocal critic. Citing the importance of defending Western values, Meloni has criticized the Chinese authoritarian system, the treatment of the ethnic minorities in Xinjiang, and the erosion of rights in Hong Kong. She had openly criticized the Chinese policies towards Tibet and invited Italian athletes to boycott the Beijing Olympics. She was vocal about the role of China in mismanaging the Covid-19 pandemic, disagreeing that China played a key role in supporting Italy during the first months of the pandemic. Her position on the Chinese military exercises against Taiwan, especially in response to U.S. speaker of the House Nancy Pelosi’s visit to Taipei, was framed as the “unacceptable behavior of Beijing” and that, “…the EU is an important market for China, that risks to be closed if Beijing decides to attack Taiwan.” In stating her opinion on Italy’s membership in the BRI, she stated that it was a big mistake and suggested that it would be very difficult to extend the agreement in 2024 if current conditions continue.

And then there is the Transatlantic option

In the larger economic trade picture, the real players at the table are the transatlantic team. The EU (mainly Germany and France) and the United States are Italy’s most important economic partners. Since 2010, trade between the United States and Italy has almost doubled from $41 to $76 billion. Unlike with China, the trade balance has always been positive for Italy. (Last year, for example, it stood at almost $39 billion.) Italians have cumulatively invested $35 billion in the United States—more than three times that of China, which is less than $10 billion. Taking advantage of the 2008-2009 economic crisis, China invested heavily in acquiring Italian companies in distress. At a cumulative amount of 16 billion euros by 2021, Italy became the second-most-important economy for Chinese investment in the EU, after Germany. By comparison, for Italian companies, the advantages of business ventures that can depend on the rule of law and protection of intellectual property make investments and trade with the United States much wiser.

During her acceptance speech, Meloni underscored the role of Italy as a founding member of the Western alliance. “The transatlantic alliance guarantees for our democracies a peace and security framework, that we take for granted,” she said. “It is a duty of Italy to fully contribute, if we like it or not, freedom has a price, that price for a state is the capacity it has to defend and credibility in the framework of the alliances.” Italy will be a credible partner of the transatlantic alliance, starting from the support for the Ukrainian people opposing the Russian invasion.

Thus, when it comes to Meloni, it’s about what she says and does, not about what is said about her.