It's in America's National Interest to Stay in NAFTA 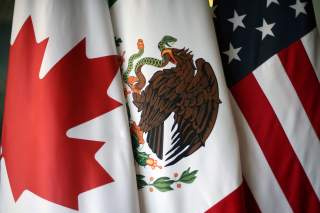 President Trump’s new national security strategy stresses the importance of promoting America’s prosperity and security. It highlights rivalry and competition with China and Russia and underscores the importance of strengthening international alliances where partners shoulder their responsibilities.

Our North American neighbors, Mexico and Canada, should be priority partners under President Donald Trump’s new strategy for enhancing U.S. security and prosperity. Both are willing and effective partners for meeting threats to America’s security. Their law enforcement and intelligence cooperation can expand U.S. security far beyond our borders. Both can bolster America’s ability to compete with China and other economic powers both at home and in global markets, while creating jobs in all three of our continental economies.

By its actions in the next few months, the United States can help achieve the kind of security and prosperity envisioned in the president’s national security strategy, working with America’s two immediate neighbors. Alternatively, the United States can make it a lot harder to achieve either objective. Especially important are the steps the U.S. administration takes regarding North American trade negotiations in early 2018. Millions of jobs and the fight against drug trafficking are on the line.

It is vital to recall that the big winners from a break up of NAFTA are likely to be our international economic competitors, particularly China, which will take advantage of any market openings with Mexico or Canada, and any added costs to U.S. production that could come from a withdrawal from NAFTA. Thus, if handled poorly, the NAFTA talks could violate a central pillar of President Trump’s new national security strategy: the United States could end up less competitive because of the costs of ending NAFTA.

Pledging to Fight Drug Traffickers in Mexico and the United States

On December 14, U.S. and Mexican Cabinet Secretaries met in Washington to discuss progress in the coordinated work against Transnational Criminal Organizations (TCOs) and to sign a new agreement on sharing criminal information. The leaders highlighted the importance of this work for the citizens of both countries, cited progress in eradication, seizures and information sharing, and pledged to deepen cooperation. The Cabinet officials underscored the danger, violence and deaths that TCOs bring to both countries, including many thousands of Americans who are dying from drug overdoses and of Mexicans being killed this year by a surge in criminal violence.

U.S. Deputy Secretary of State Sullivan pointed out that the United States and Mexico have “one of the most extensive bilateral [law] enforcement relationships in the world.” He and others argued that concrete progress is being made against TCOs to keep our citizens safer. He and U.S. Attorney General Sessions stressed that the coordinated efforts should be more effective in disrupting drug trafficking “at every point along the way”, from production to distribution, from sales to revenue streams. Secretary of Homeland Security Kirstjen Nielsen underscored the two governments are “mutually committed.” She and her Mexican counterpart signed an important new agreement on sharing of criminal history information, including biometric information, which will greatly help Mexican officials know if individuals have a U.S. criminal history.

Speaking for Mexico, Foreign Secretary Luis Videgaray highlighted that the two governments would only be able to solve the drug and violence problems created by TCOs “by working together” in a “comprehensive” approach based on the “premise of trust and shared responsibility.” Mexico’s Interior Minister Osorio Chong added that this anti-crime effort had been “difficult and painful” for Mexico, with many victims long the way, including among Mexico’s soldiers, navy and police officers. Mexico’s acting attorney general cited new joint work in eradicating illegal crops (opium) and shutting down clandestine labs including those that can produce fentanyl, one of the most deadly drugs surging in the United States.

Looking back at President Trump’s new national security strategy, it is fair to argue that Mexico is paying a heavy price as it seeks to shoulder its responsibilities against TCOs, while U.S. and Mexican leaders made clear that both countries face immediate danger and deeper cooperation is needed.

Modernizing NAFTA and the Cost of a U.S. Withdrawal

As this life-saving security cooperation has been deepening over 2017, the United States and Mexico negotiations to modernize the U.S.-Mexico-Canada trade agreement have bogged down over American proposals and the Trump administration’s talk of pulling out of NAFTA. Canada, Mexico and big chunks of U.S. industry characterize as counterproductive U.S. proposals on auto rules of origin, dispute settlement, government procurement and a sunset clause for the entire NAFTA agreement. As one senior U.S. business association official puts it, “this is the first time I have ever seen the entire North American auto industry united” in opposition to the U.S. government proposal on rules of origin. These concerns led the CEOs of GM, Ford and Fiat Chrysler to meet with Vice President Mike Pence to stress the dangers of the U.S. proposal. Fears that the United States is going to pull out of NAFTA have led a string of governors, senators, and farm and business leaders to stress NAFTA’s importance to the White House.

These cries of concern are based on the facts about the importance of Canada and Mexico for the U.S. economy. The two neighbors are the first and second export markets for the United States, and its second and third overall trading partners. They provide vital inputs for U.S. production and goods for American consumers. The U.S. farm and food industry, for example, argues that it could lose 50,000 jobs and the United States could suffer a $13 billion drop in GDP from the farm sector alone. Most of those farm states voted Republican in the last elections. Many are now afraid that leaving NAFTA will cost them dearly needed export markets, especially to Mexico.

Beyond, the farm sector, there is rising concern that a U.S. withdrawal from NAFTA would cause significant job losses in the United States as well as in Mexico and Canada. Studies are predicting U.S. job losses and displacements from 187,000 to over a million in worst case scenarios across several sectors of the economy as well as a notable hit to gross domestic product, and such loses would cost all three economies. Another study found that U.S. consumers could face extra costs of over $7 billion a year without NAFTA. And finally, a survey of investors found many predicting a shock to stock markets if the United States were to withdraw from NAFTA. This would be an unwelcome blow after the market boost expected from U.S. tax reform.

It is important to recall that NAFTA trade, despite the repeated assertions that NAFTA cost jobs, supports the jobs of up to 14 million U.S. workers. Just in U.S.-Mexico trade, for example, in 1993 700,000 jobs were thought to be supported by trade with Mexico. In 2015, 4.9 million U.S. jobs were found to be support by U.S.-Mexico trade. The assertion that the United States should somehow seek to rebalance its bilateral trade deficit through a new NAFTA is widely criticized as a red herring.

It is not surprising that many are worried about the economic turmoil if the United States were to withdraw from NAFTA, as threatened. This is especially true when many informed observers believe that if the U.S., Mexico, Canada and industry representatives were willing to sit together to work through the data and economics, they could find a way to address some important U.S. objectives. For example, on the goal of increasing trade within North America, a careful, informed reworking of rules of origin could produce progress, for example by including R&D spending and the full value of technology as contributing to North American content. Looking for additional ways to make more efficient the trade/shipment of intermediate goods produced in North America might also yield benefits. A key premise for success is to recognize that agreement on a modern NAFTA opens doors to new jobs and more competitive products.

Returning to the security side of the equation, an American decision to pull out of NAFTA is very likely to make it harder for the United States and Mexico to continue improving security cooperation in the months ahead. Deepening that work is based on building trust and a shared vision between the two governments. First, a U.S. withdrawal is likely to further increase critical views of the United States among Mexicans, which has already risen to 65 percent negative in 2017.

Second, Mexico is holding presidential and congressional elections on July 1, 2018. A U.S. decision to withdraw from NAFTA will introduce the American decisions into the campaign in a very negative way, as candidates will need to address the negative repercussions for Mexico’s economy. It will be very difficult for any politician to champion deeper cooperation with the United States, and many will be tempted to be highly critical of the potential economic damage for Mexico from a NAFTA withdrawal.

Finally, it will be much less likely that Mexican law enforcement officials will be willing to pursue deeper cooperation in this climate. Anti-crime and border cooperation would no doubt continue, but most likely with less enthusiasm and less political support.