It's Complicated: Not All Returning "Jihadi Brides" Are Dangerous 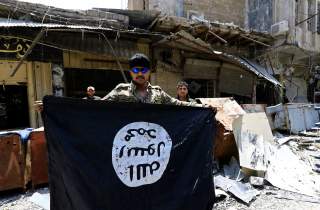 Since the fall of the ISIS Caliphate in late 2017, Western societies have expressed concern about the possibility of returning foreign fighters. It is not just returning men that perturb governments. The prospect of women, known as “jihadi brides,” returning to the West, often with children born under ISIS rule, is already seen as a potential problem.

In the past two years, the issue has been gathering pace, particularly in the UK. The end result has often been stripping jihadi brides of their UK citizenship and banning them from returning to the country.

The start of 2018 brought the first case of a Jihadi bride re-entering the UK. Arriving at Heathrow from Tanzania with her child, who was born in ISIS controlled territory, she was arrested by UK counterterrorism officials, with the child taken into the care of authorities.

This move mirrors standard protocol, with UK social services creating plans to take the children of returning Jihadi brides, who have British citizenship, into care. Similarly, Lewisham Council stated that if Khadijah Dare, another British citizen who fled to join ISIS with her son, Isa, tried to return to the UK then it would take “measures to ensure the safety of her children.”

While such moves are completely understandable, the UK government and local authorities prioritize the protection children and the general public from returning ISIS members, which means that in reality the picture for returning ISIS women is far more complicated. Unlike their male counterparts, the exact role of women is unclear, meaning that they may need to be assessed differently than male members of ISIS.

The role of women in ISIS appears to vary drastically between dutiful wife, propagandist and dangerous extremist who helps to incite violence against the enemies of ISIS. These differences could be considered by governments when dealing with returning jihadi brides.

A 2015 manifesto released by the Al-Khansaa Brigade, an all-women police and religious enforcement unit for ISIS, stated that “the fundamental function for women is . . . in the house with her husband and children.” According to the manifesto, women are expected to stay in their homes, perform duties of knitting and cooking, and produce children, with their ideal roles “religion and chastity.” They are also expected to “obey their husbands.”

There appears to be no role for women in actual “jihad.” In fact, the manifesto states that “jihad is by appointment only,” a task reserved only if men cannot defend the “caliphate.” Jihadi brides using social media from the caliphate have emphasised a similar reality; one Twitter user known as “@al_Khanssaa” tweeted that “theres (sic) not a single women fightin (sic) in IS. The womens (sic) place is in her house looking after her kids and fulfilling her duty to her husband.”

However, women in ISIS have also served as propagandists for the group, communicating with other women online to advise them how to enter ISIS territory, what to bring and what to expect via a variety of different channels including Twitter, tumblr, kik and ask.fm. In the case of Glaswegian Aqsa Mahmood, who left the UK to join ISIS, she established a tumblr page, Umm Layth, to recruit other women and offer advice. As a result of these activities, in August 2017, she was stripped of her British citizenship with the UK government claiming she was not stateless as she could apply for citizenship in Pakistan, the country where her parents were born.

Finally, there are women who appear to be as involved in the day-to-day operations of ISIS as the men. The case of Sally Jones, who was allegedly responsible for training all European female recruits in the use of weapons and tactics, demonstrates a more dangerous role for women within ISIS. She allowed and encouraged the participation of her British born son JoJo in ISIS propaganda videos, which saw him execute prisoners at just twelve years of age. It was recently confirmed as ‘highly likely’ that both had died in the same airstrike.

Women who have fled to ISIS and returned to the West should face consequences for their actions, including criminal actions in some cases. However, automatic removal of their citizenship might not be the best solution in all cases.

If they are to return to the West, then each woman should be assessed individually on a case-by-case basis. When possible, authorities could examine nuances surrounding each returnee and seek an appropriate solution based on each female’s own unique case. The removal of citizenship does not have to be the only way to deal with the escalating problem of returning Jihadi brides.

Antonia Ward is an analyst in the Defence, Security and Infrastructure team at RAND Europe. Her research interests include counterterrorism, counter violent extremism (CVE), intelligence and cybersecurity.