It's Time for America to Break with Beijing 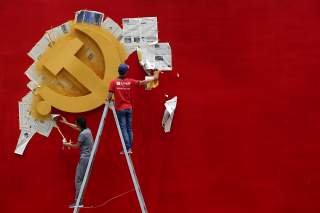 SOME MISTAKES are repeated over the course of generations. For more than four decades, American presidents sought a closer relationship with China, working to “engage” that country so as to “enmesh” it into the international system. Richard Nixon, in his landmark Foreign Affairs article in 1967, provided the rationale for engagement, arguing the Chinese state could not be isolated. “Taking the long view,” he famously wrote then, “we simply cannot afford to leave China forever outside the family of nations, there to nurture its fantasies, cherish its hates and threaten its neighbors.”

Since the early 1970s, American policymakers believed they could avoid such nurturing, cherishing and threatening by making the success of the Communist Party of China a goal of U.S. foreign policy. With interests defined this way, American presidents helped China’s communists at crucial moments.

The first of those moments came in 1972, during the latter stages of Mao Zedong’s Cultural Revolution. Years of internal fighting and chaos—essentially civil war—had weakened China’s ruling organization, but Nixon’s visit that year signaled support for Mao’s tottering regime. “We’re damned,” said Shanghai banker Wu Yaonan at the time, as recounted by democracy activist Chin Jin. “The United States is coming to the rescue of the Communist Party.”

Another rescue was secretly mounted by President George H.W. Bush in the wake of protests in 371 Chinese cities in the spring of 1989 and the slaughter in Beijing in early June. Bush sent emissary Brent Scowcroft on an unannounced trip to the Chinese capital in July to assure paramount leader Deng Xiaoping that Washington would stand with the Party and help it outlast withering criticism from abroad. Bush then made sure that America’s Tiananmen sanctions, which he was forced to accept, were ineffective and lifted quickly.

Perhaps the most far-reaching attempt to save the communist system came a decade later when the Chinese economy appeared to be contracting and foreign businesses were reconsidering their commitment to China. Then, in 1999, the Clinton administration inked an agreement with Beijing containing what were to become China’s terms of entry into the World Trade Organization (WTO).

“Economically, this agreement is the equivalent of a one-way street,” President Bill Clinton said in a speech in March 2000. By that, he meant China was the one making all the concessions, and, reflecting the Western optimism of the times, he predicted the country would inevitably be transformed by trade. “China,” he said, “is not simply agreeing to import more of our products; it is agreeing to import one of democracy’s most cherished values: economic freedom.” Daniel Patrick Moynihan was more appropriately cautious: “The world,” the senator said, “will be a safer place—or so we hope.”

IN MANY ways, America’s hopeful policy became a grand wager. Americans bet that hostile communists would eventually return goodwill and support postwar liberal values that were bolstered by an American-designed architecture of treaties, conventions, rules and norms.

Nixon understood the nature of the gamble and eventually realized it might be a loser for America and the international community. As he said of China shortly before he died, “We may have created a Frankenstein.”

Unfortunately, that is exactly what America did—and is still doing. Today, Chinese leaders are using the proceeds of trade with the United States to, among other things, expand their military while its officer corps openly talks about killing Americans. Twice in December, a senior Chinese officer publicly urged unprovoked attacks on the U.S. Navy in the global commons. In the second of the outbursts, on the twentieth of that month, Rear Admiral Luo Yuan proposed the use of two types of ballistic missiles to sink two aircraft carriers and kill 10,000 Americans.

The Chinese have even gone beyond bluster. In May 2018, the Wall Street Journal reported that the Chinese military, from its base in Djibouti, lasered an American C-130 cargo plane, causing eye injuries to two pilots. An attempt to blind pilots, of course, is tantamount to an attempt to bring down their craft and kill them. American planes are continually lasered in the East China Sea by Chinese forces. Moreover, last year sonic waves caused brain injuries to American diplomats at the consulate in Guangzhou. Because the Chinese Communist Party runs a surveillance state, Beijing either was the perpetrator of this crime or complicit in it.

Injuring American pilots and diplomats is not Beijing’s only sin. China is trying to dismember three American treaty allies in its peripheral seas. In the South China Sea, inside its expansive “nine-dashed line,” China has now positioned about 275 vessels around Thitu Island, which has long been under control of the Philippines. This pressure tactic, dubbed the “cabbage” maneuver, was employed to seize Scarborough Shoal from Manila in early 2012 and has since been used in various other Philippine locations in the South China Sea, such as Second Thomas Shoal.

Beijing is also trying to take apart another island nation, Japan, by pressuring East China Sea islands that Tokyo administers and calls the Senkakus. At the same time, Chinese state institutions, backed by state media, are making the almost-absurd claim that the Ryukyu Islands, including Okinawa, are part of China and not Japan.

In addition, Beijing disputes South Korea’s possession of the Ieodo Ocean Research Station, built on what is known as Socotra Rock in the Yellow Sea.

To support these and other outlandish territorial claims, the Chinese are continually interfering with American vessels and aircraft in the global commons, putting crews in danger with close intercepts. In September, for instance, a Chinese destroyer, the Lanzhou, attempted to cross the bow of an American one, the Decatur, in the South China Sea, coming within a few yards.

Beijing indulges in bad conduct galore. It is giving safe haven to North Koreans cyber-attacking the United States; is proliferating materials, equipment and technologies for nuclear weapons and ballistic materials to avowed enemies of the United States such as Tehran and Pyongyang; is imprisoning American legal residents, and possibly U.S. citizens, in concentration camps in Xinjiang; is attacking both the concept of democracy in general and American democracy in particular in unrelenting propaganda campaigns; and is violating American sovereignty by operating its agents and diplomats in improper and sometimes open attempts to influence and coerce Americans. Challenges don’t come more comprehensive and existential than China’s.

This aggressive, belligerent, dangerous and sometimes criminal conduct resembles, of course, similar activities against other states, and all such bad acts are the evidence of the failure of America’s engagement policies. For decades, Americans thought the remedy for the failure of engagement was more engagement.

American and other policymakers have tried “constructive engagement,” “aggressive engagement” and everything in between as they attempted to entice, cajole, shame and inspire Chinese leaders. Robert Zoellick, while deputy secretary of state in 2005, urged China to become a “responsible stakeholder” in the international system. The following year, Secretary of State Condoleezza Rice pronounced it was, in fact, becoming one. American policy was built on self-delusion. Hopes became assumptions and assumptions hardened into ideology. Ideology, in turn, became faith.

Yet critics now recommend only incremental adjustments to the four-decade-old engagement policy. Take, for example, Kurt Campbell and Ely Ratner, Obama-era State Department officials. “Neither seeking to isolate and weaken it nor trying to transform it for the better should be the lodestar of U.S. strategy in Asia,” they write of China in Foreign Affairs. The gist of their proposed approach is “don’t do much.”

The proponents of unambitious—or as President Donald Trump might say, “low-energy”—views have a point: nuclear-armed states should be given wide berths, especially when they’re in danger of failing. George H. W. Bush presided over the largely peaceful collapse of the Soviet Union, but his infamous Chicken Kiev speech of August 1991 makes it clear the forty-first president was luckier than anything else. He had, as is now evident, completely failed to understand the power of nationalism in Ukraine, the site of the mistimed address, or the dynamics in the wider USSR, which collapsed just months after the speech.

American policy elites do not understand China’s dynamics because they not only cling to overoptimistic assessments of China’s trajectory, as Campbell and Ratner have told us, but also because they maintain fundamentally misconceived views of the nature of Chinese Communism. China, for various reasons, now cannot meet a basic expectation of others: it is unable to live within the current international system, even as adaptive as that framework has proven to be.

A China seeking to be a long-term flouter would be bad enough, but there is evidence that the Chinese leadership has broader horizons and more malign intentions. Xi Jinping, the current ruler, is clearly far more ambitious than Deng Xiaoping, Jiang Zemin or Hu Jintao, his three immediate predecessors. Like Mao Zedong, Deng’s predecessor and founder of the People’s Republic, Xi has a global vision. While Mao fervently talked about communist revolution sweeping the planet in the distant future, Xi nostalgically looks to China’s imperial past, where the emperor maintained that he or she—one woman sat on the throne—ruled tianxia, or “All Under Heaven.”