It's Time for a New Approach to the Balkans 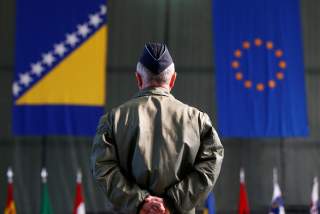 As their recent Berlin Summit shows, the leaders of France and Germany realize they must focus on real solutions to the problems of the Western Balkans.

The vision of “Europe whole, free and at peace” has an unfinished corner we now call the Western Balkans, formerly known as Yugoslavia before that country disintegrated into war, ethnic cleansing and genocide. The countries there—Bosnia, Kosovo, Serbia, Northern Macedonia, and Montenegro—are quiet now, but it is a deceptive calm. The region is in trouble, which could easily spread to the rest of Europe and affect the interests and security of the United States.

The hardest problems are the relationship between Serbia and its former province, now an independent republic, of Kosovo; and the conflicts within Bosnia-Herzegovina over that state’s identity and survival. Both have roots that go back to the war, both raise fundamental questions of identity and are deeply emotional.

These problems are like broken bones that have been set hastily and healed wrongly: they affect everything and will keep causing trouble—trouble that has, once again, reached crisis dimensions. On top of these issues, the whole region suffers from endemic corruption, low state capacity, and governance by patronage and clientelism rather than by law.

Also, Russian influence in the Western Balkans has grown in recent years. While its ability to play a decisive role in the region is limited, Russia can be unhelpful and disruptive.

Europe and the United States have tried to fix the Western Balkans and it has not worked. A new approach is needed, one that acknowledges the seriousness of the problem and accepts it will take a long time and significant resources to solve it.

Past attempts have erred in one of two ways: ignoring the real problems and trying to do too much too quickly.

For many years Europe and the United States encouraged local leaders to shift their attention from the hardest problems, which brought them into bitter conflict with one another, to the technical and apolitical work of integration with the European Union (EU) and NATO. The hope was that in this way otherwise intractable conflicts would soften and become soluble. It is now clear this approach will not work.

Yet every attempt to create a “Big Bang,” whether in reframing Bosnia’s constitution or bridging the gaps between Belgrade and Pristina, has failed. Any plausible solution will involve painful compromises. It is irresistibly tempting for spoilers to attack these as treasonous sell-outs.

These problems cannot be solved overnight. They will not go away as the Balkan countries inch their way to EU accession. They demand steady, patient attention over many years, by many people, led by local actors with support from Europe and the United States.

The quest for solutions has to continue, but quietly, preferably away from the glare of publicity, and without unrealistic expectations of rapid wins. External actors can help with Track 2 diplomacy, out of the public eye and off the front pages. Understandably, progress may take a long time and incremental gains may be lost in occasional setbacks.

While the search for answers to the Balkans’ big questions and progress toward EU and NATO membership takes place, Europe should help the region knit itself back together and rebuild connections to its wider neighborhood. It is a sad irony that it is harder today to travel from one part of what used to be Yugoslavia to another, than it is to go from Warsaw to Paris. The free movement of people, ideas, money, goods, services, and bytes within the Balkans and between the region and Europe will do much to build trust and create a demand for good government.

Integration into the western political, economic and security architecture is still a worthy, even essential goal, but it is many years off. Yet, integration will not in itself solve the region’s political problems. NATO and the EU can only admit well-ordered states at peace with themselves and their neighbors. The two remaining Balkan conflicts prevent exactly this: they make it impossible for stable, well-run states to form. No one wants a partner for whom the rule of law is a joke and whose neighbors are bitter enemies.

The urgency of the Western Balkans is underscored by a recent breakthrough. There used to be a third challenge: Greece’s refusal to accept its neighbor Macedonia’s name. The two countries just resolved it, with a new compromise name of “Northern Macedonia.” This was the easiest of the big Balkan problems. Yet it took them almost thirty years, at a staggering cost. Northern Macedonia lost about fifteen years of progress toward NATO and EU membership as the quality of its governance slid from best to worst in the region.

Northern Macedonia is now on the hard but hopeful road back. There is no time to spare for Bosnia, Kosovo, and Serbia and the rest of the region. The moment is ripe for Europe’s leadership, in cooperation with the United States, to refocus on the Western Balkans and give the region and its issues the attention it deserves and our interests in a stable and prosperous Europe and Western Alliance call for.

And so, it’s not enough for us to rely on existing mechanisms to address these challenges in the Western Balkans. European leaders are right to engage, and the United States must be ready to support these efforts.

Cameron Munter is CEO and President of the EastWest Institute in New York. A career American diplomat for three decades, he served as U.S. Ambassador to Serbia (2007–2009).

Marko Prelec is a specialist on southern and eastern Europe and an expert on the states of former Yugoslavia. He is currently Professor of Practice and Director of Applied Policy Projects, School of Public Policy, at the Central European University.