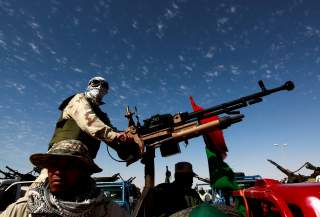 This April is the month for notable milestones in two major U.S. security commitments. NATO marks its seventieth anniversary on April 4, and the Taiwan Relations Act turns forty on April 12. Predictably, there will be much celebrating among supporters of the two measures. But these anniversaries should be occasions for reflection and reconsideration, not mindless endorsements. The strategic environments in both Europe and East Asia have changed dramatically since Washington made those commitments. In both cases, the most important and worrisome change is that the risk level to America from both commitments has risen sharply, even as the strategic justification for them has eroded.

When the United States joined NATO in 1949, the strategic rationale was straightforward and logical. The Soviet Union had emerged from World War II as a global power second only to the United States in its economic strength and military clout. It soon established an empire of Communist political satellites in Central and Eastern Europe, and U.S. officials had no way to be certain just how far the Kremlin’s geographic ambitions extended. The USSR gave every indication of being a messianic, totalitarian power with massive, perhaps unlimited, expansionist goals.

Conversely, the democratic nations of Western Europe emerged from World War II economically weak, militarily exhausted and psychologically traumatized. They did not seem capable of defending themselves from an aggressive Soviet Union without U.S. assistance and leadership. NATO was born in that ominous strategic environment.

The situation has changed beyond recognition in the seventy years since NATO’s formation. The European Union (with or without Britain) is a powerful global economic player. Indeed, the EU collectively has a larger population and a larger economy than does the United States. The nations of democratic Europe are prosperous, capable entities, not demoralized, war-ravaged waifs. Although military spending by NATO’s European members (especially Germany) could and probably should increase, they collectively spend more than three times as much as Russia.

The threat environment also has changed dramatically for the better. The Soviet Union dissolved at the end of 1991, and its principal successor state, Russia, is a pale shadow of that entity, with barely half its population. Whereas the USSR had the world’s second largest economy, Russia does not even rank in the top ten. Its economic output is approximately the same size as South Korea’s and Canada’s. Russia’s military budget is less than one-eleventh of the $750 billion that the Trump administration wants the United States to spend during the next fiscal year. Moreover, Moscow’s military spending is declining, not growing—a curious trend for a government supposedly bent on conquest.

Although Russia has sometimes exhibited abrasive and even aggressive behavior, it has been confined to matters regarding countries in the immediate neighborhood, most notably the territorial spats with Georgia and Ukraine. Today’s Russia is a conventional (albeit autocratic) regional power, not a revolutionary global expansionist power like the Soviet Union. Indeed, the United States and its allies deserve most of the blame for current tense relations with Moscow. Western policies, especially the expansion of NATO to Russia’s border and the alliance’s attacks on Russian clients in the Balkans (Serbia) and the Middle East (Syria), were the primary culprits in poisoning East-West relations.

NATO expansion also has unnecessarily increased Washington’s risk exposure. NATO’s original mission was to keep Western Europe, a region with several key geopolitical prizes, out of the orbit of a totalitarian rival. The roster of most new NATO members consists primarily small, often vulnerable security dependents. Adding such minuscule “allies” like the three Baltic republics, Slovakia and Montenegro, does not enhance America’s security in the slightest; moreover, in the case of the Baltic republics, NATO expansion was a gratuitous provocation to Russia. Seeking to admit Georgia and Ukraine, which Washington still wishes to do, would be even more provocative. U.S. de facto military support for those countries already is creating worrisome dangers.

During the Cold War, the United States risked nuclear war to protect economically and militarily important allies in Europe from a menacing, totalitarian Soviet Union. Now, America runs the same—or even greater—risks to protect strategically and economically trivial mini-states from a conservative, declining regional power. That situation cries out for a policy reassessment, not an exercise in celebratory nostalgia about NATO’s Cold War heyday.

A similar reassessment is needed with regard to the Taiwan Relations Act (TRA). Congress passed that measure in response to the Carter administration’s decision to officially recognize the Beijing regime as China’s legitimate government. Among other requirements, that change meant terminating Washington’s defense treaty with the Republic of China (the Nationalist rump government on Taiwan). Taiwan’s supporters crafted legislation to maintain “unofficial” diplomatic relations with Taipei and to replace the defense treaty with a vague, but still real, continuing U.S. commitment to Taiwan’s defense.

At the time, the TRA seemed to be a morally justified, low-risk concession to a long-time U.S. ally. The U.S. military advantage over China in the late 1970s was overwhelming, and Chinese leaders, including Deng Xiaoping, made statements that the official goal of Taiwan’s reunification with the mainland was not urgent. When Taiwan transitioned to being a democracy in the 1990s, the moral case for Washington’s informal defense commitment to the island became stronger, even though the mainland government began to show signs of greater impatience and belligerence. The United States deployed two aircraft carriers and support vessels to waters near the Taiwan Strait in 1996 in response to Chinese shelling and other measures Beijing had taken to intimidate Taiwan’s voters on the eve of the island’s first fully free election. And Washington could make its show of force with little fear of reprisal.

However, East Asia’s security environment has changed at least as much as Europe’s over the past few decades. China was weak militarily and a minor player in the world’s economy at the time of the TRA’s adoption. Today, China is the world’s number two economic power, and its military capabilities are significant and growing rapidly. China’s leaders also exhibit mounting impatience about Taiwan’s efforts to maintain its de facto independence. Beijing’s actions since Taiwan’s January 2016 election empowered the pro-independence Democratic Progressive Party are especially ominous. China is putting growing pressure on Taiwan, poaching the island’s shrinking number of diplomatic allies and conducting menacing military exercises in the Taiwan Strait.

The potential costs to the United States of continuing to protect Taiwan have soared. China is now one of America’s largest trading partners and sources of funds for Washington’s seemingly endless addiction to deficit spending. A breakdown of the U.S. relationship with Beijing would have enormous adverse economic consequences.

The military risks also are alarming. China’s ambitious military modernization program has focused on anti-ship missiles and other “access denial” weaponry. It would be massively more difficult and costly in treasure and blood for the United States to intervene militarily to defend Taiwan today than it was when the TRA became law. Indeed, it would be far more costly and uncertain to do so now than when the aircraft carrier battle groups made their show of force in the mid-1990s. In another decade or so, it may be entirely unfeasible to enforce an effective shield to defend Taiwan.

As in the case of NATO’s anniversary, U.S. leaders should use the TRA’s milestone to reconsider the commitment and develop a new, less risky strategy. George Washington and America’s other founders presciently warned against permanent alliances. The overriding problem with permanent or temporary open-ended alliances as that they remain in operation even when a changed strategic environment renders them obsolete and the reward-risk ratio turns highly negative. That is the situation with both NATO and the TRA. Instead of vacuous celebrations of nostalgia, the anniversaries should be occasions for adopting more prudent, restrained policies.