It's Time for the U.S.-South Korea Alliance to Evolve 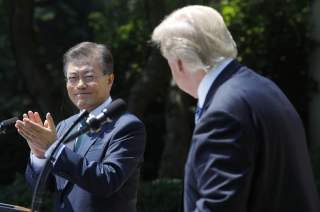 The alliance between the United States and South Korea has, for the past six decades, been a core pillar of the U.S.-led security architecture in Northeast Asia—but in recent months, the bilateral relationship has been facing something of a crisis of confidence. Though the alliance is broadly integral to maintaining a balance of power favorable to the region’s democracies, functionally, its nearly singular focus on managing the North Korea challenge bears fundamental risks.

In 2018, the breakneck pace of inter-Korean rapprochement and the failure to reach a timely agreement on the United States and South Korea’s military cost-sharing framework, the Special Measures Agreement, nudged the alliance toward a new inflection point. These developments have caused alarm in some quarters about Seoul going its own way, balancing between great powers, as portended in President Moon Jae-in’s August 2018 Liberation Day Speech. But they should also be seen as an opportunity to inject new vitality into the bilateral relationship. U.S. officials have urgent cause to work with their South Korean counterparts toward an elevated vision of the alliance—one that transcends exclusive orientation around North Korea and a transactional, cost-driven view of burden-sharing. As Seoul adopts more globally oriented policies, the United States should parlay these efforts into a more concrete role for South Korea in the United States’ Free and Open Indo-Pacific Strategy.

Given South Korea’s reticence to aggravate China in the security domain, economic cooperation between the United States and South Korea remains the low-hanging fruit. Seoul’s growing regional engagement is in part informed by the view that South Korea must diversify its economic partners in order to mitigate risk, particularly amid enduring trade tensions between the United States and China. This includes more energetic engagement with ASEAN countries, particularly Vietnam, the Philippines, and Indonesia, under his marquee “New Southern Policy.” As Moon unveiled his New Southern Policy in 2017, for example, he signed an MOU with Indonesia for a new light rail transit system in Jakarta as part of a series of pacts between the two countries expected to be worth up to $1.9 billion. Simultaneously, Seoul launched a more concerted effort to upgrade its economic ties with Vietnam, including to achieve a bilateral trade volume of $100 billion by 2020. Aligning U.S. and South Korean investments into a set of strategic infrastructure projects in Southeast Asia would go a long way in synchronizing the two countries’ regional policies and advancing the goals of the U.S. Indo-Pacific strategy.

Beyond economic cooperation, stabilizing the trajectory of the U.S.-ROK alliance also requires managing escalating tensions between South Korea and Japan. Mutual animosity came to a head in recent weeks over Tokyo’s claims that a South Korean warship used its fire radar to lock onto a Japanese reconnaissance aircraft. The incident was a logical culmination of the Moon administration’s harder tack against Tokyo in light of unresolved grievances during Japan’s early twentieth-century colonial rule of Korea. But the U.S. vision for a Free and Open Indo-Pacific lacks coherence if it cannot mediate between two of Northeast Asia’s most vibrant democracies. There is still room for trilateral cooperation in discrete areas—for example, convening cyber experts from the three countries to counter cyber threats in the lead-up to the 2020 Summer Olympics in Tokyo. Elevation of the issue of North Korea’s abductions of Japanese citizens in the late 1970s in Washington and Seoul’s diplomatic engagement with Pyongyang would also allay mounting Japanese concerns about the pace of inter-Korean rapprochement.

Though South Korean public opinion currently remains overwhelmingly in favor of a strong alliance, divergent views on burden-sharing, U.S. tensions with Beijing, and the halting pace of negotiations with North Korea can ultimately erode public support. The United States cannot become complacent about public diplomacy. Higher education is a critical policy tool to shape the loyalties of younger generations. On a per capita basis, South Korea sends more students to the United States than any other country. Despite this, the number of South Koreans studying in the United States has trended downward—due in part to declining birth rates and also due to a larger number of students choosing to remain in the region for higher education particularly in STEM fields—and this trajectory is likely to continue. In addition to publicly funded scholarships, private U.S. corporations have a critical role to play in supporting South Korean research and scholarship at top-tier American universities. These initiatives should be part of a sustained, concerted effort to build up younger generations of leaders in South Korea that are committed to elevating the U.S.-South Korea bilateral relationship.

North Korea will remain a priority of the U.S.-ROK alliance for the foreseeable future, but this should not come at the expense of building out new opportunities for bilateral cooperation between the two countries in the region. Even as pathways for future engagement with North Korea remain uncertain, the United States needs to initiate a discussion with South Korea that clarifies long-term goals for the bilateral relationship beyond the scope of the Korean Peninsula. The durability of the alliance depends on it.

Kristine Lee is a Research Associate with the Asia-Pacific Security Program at the Center for a New American Security. She received a Fulbright Scholarship to South Korea and received her bachelor’s and master’s degrees from Harvard University.