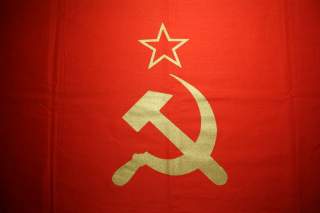 IN EVELYN WAUGH’S Sword of Honor trilogy, Guy Crouchback, a lieutenant in the Halberdiers who has just fought the Germans in the Battle of Crete, finds himself convalescing during the summer of 1941 in Alexandria in the official residence of the hostess Julia Stitch. A parade of pashas, generals, courtiers or diplomats visit, but Stitch—who was modeled on Waugh’s close friend Lady Diana Cooper—never neglects her new ward: “Three or four times a day she was at his side with the hypodermic needle of her charm.” This idyll is interrupted, however, when her husband announces at a small luncheon that Hitler has just invaded Russia:

“‘Why couldn’t the silly fellow have done it to start with?’ Algernon Stitch asked, ‘instead of landing the lot of us in the soup first?’

‘Is it a Good Thing?’ Mrs. Stitch asked the simple question of the schoolroom.

‘Can’t tell. The experts don’t believe the Russians have a chance. And they’ve got a lot of things the Germans will find useful.’

‘Welcome our new allies, of course. What else can he?’

Indeed it was. But as Algernon’s hauteur indicates, the suspicions that many British conservatives harbored about the Soviet Union before World War II never really went away. Perhaps no one found their hostility more vexing than Ivan Maisky, the Soviet ambassador to England from 1932 to 1943. Neville Chamberlain called Maisky a “revolting but clever little Jew.” Henry “Chips” Channon said that he was the “ambassador of torture, murder and every crime in the calendar.” And in Anthony Powell’s roman-fleuve A Dance to the Music of Time, after an irascible monkey named Maisky bites a butler who develops septicemia, Capt. Teddy Jeavons remarks that this was “the end of Maisky too, which wasn’t really just. But then what is just in this life?”

The real Maisky might well have asked the same question. Many of his colleagues were purged during the 1930s, but he managed to avoid the Lubyanka until 1953. Shortly before Stalin’s death in March, Maisky was charged with espionage, treason and involvement in Zionist conspiracy, and his diaries figured in the indictment. He was pardoned in 1955. Gabriel Gorodetsky, who is a Quondam Fellow at Oxford, discovered Maisky’s journals in 1993 during a research trip to the Russian Foreign Ministry. It took a team of researchers led by Gorodetsky a decade to prepare them for publication. This magnificently absorbing and expertly edited volume furnishes an invaluable glimpse into Soviet and British diplomacy.

Stalin’s foreign minister Maxim Litvinov, who was Maisky’s mentor, sought to establish a collective security pact with Britain and France directed against Nazi Germany. Maisky’s mission was to effect a détente between London and Moscow. During the 1930s, Maisky went well beyond his official brief, cultivating the antiappeasement faction in the Tory Party in the hope that Winston Churchill would become prime minister. “You used to look down upon us from the Gallery in Parliament,” Sir Harold Nicolson later wrote him, “with benevolent interest rather like a biologist examines the habits of newts in a tank.” Maisky’s intimate ties to the British establishment—he knew everyone from Churchill to David Lloyd George, from George Bernard Shaw to Lord Beaverbrook—stirred doubts in Moscow about his true loyalties. In 1936, at the funeral of George V, who was the cousin of Czar Nicholas II, Lady Vansittart observed Maisky wiping away a tear.

In May 1939 Stalin ousted Litvinov and replaced him with Vyacheslav Molotov, who surrounded the foreign ministry with NKVD troops and, according to Sheila Fitzpatrick’s On Stalin’s Team, apparently shouted, “Enough of Litvinov liberalism. I am going to tear out that kike’s wasp’s nest by the roots.” The Molotov-Ribbentrop pact, carving up Poland and the Baltic states, soon followed.

MAISKY WAS born on January 7, 1884 in the town of Kirillov near Nizhny-Novogorod and grew up in Omsk, Siberia. His father, who was of Jewish Polish descent, practiced medicine and read widely. The family bookshelves were filled with beautifully bound volumes of Shakespeare, Byron and Schiller. The young Maisky was steeped in the humanist tradition of the Russian intelligentsia and worshipped the German poet Heinrich Heine. At age seventeen, he enrolled at St. Petersburg University and published his first poem, “I Wish to Be a Great Thunderstorm.” Revolutionary politics beckoned. He took part in the Revolution of 1905, joined the Menshevik party and was arrested by the czarist police. His sentence was commuted to exile abroad. He obtained a master’s degree in economics at Munich University before emigrating to London in 1913, where he befriended future Bolshevik leaders Georgy Chicherin and Maxim Litvinov. According to Gorodetsky, “They held lively intellectual soirees, with revolutionaries, Freudians, Fabians and literary figures such as Bernard Shaw and H. G. Wells.” To join the Bolsheviks, Maisky had to issue a formal recantation of his Menshevik past. Maisky’s friend Beatrice Webb diagnosed that he was

“one of the most open minded of Marxists, and is fully aware of the misfits in Marxian terminology—scholastic and dogmatic. But then he has lived abroad among infidels and philistines and his mind has been perhaps slightly contaminated by the foreign sophistical agnostic outlook on the closed universe of the Moscow Marxians.”

Maisky’s cosmopolitan outlook meant that he was under permanent suspicion, but the nimble diplomat advanced rapidly in the foreign service. By 1932, the imminent collapse of the Weimar Republic prompted Stalin to seek improved relations with England. He sent Maisky to London, where he remained with his wife Agniya until 1943.

Many Tories, foremost among them Chamberlain, saw Germany, not Russia, as a potential force for stability and peace on the continent. In Maisky’s view, Chamberlain was a “consummate reactionary, with a sharply defined anti-Soviet position.” He shrewdly observed that this arch-appeaser had constructed his own parallel Foreign Office headed by Harold Wilson to undermine Foreign Secretary Anthony Eden, whom Maisky said Chamberlain had found “to be a much tougher nut than the PM had expected.” In February 1938 Eden resigned to protest Chamberlain’s craven policies.

Among Maisky’s confidants were Robert Vansittart, the permanent undersecretary of state, and Churchill. In March 1935, for example, Maisky recorded, “I drew V.’s attention to the obsequious servility to Hitler shown by the British and some members of the Cabinet. . . . It only inflames the Führer’s appetite and makes him still more unyielding.” In what amounted to a personal coup, Maisky persuaded Eden to meet Stalin in Moscow on March 29, 1935, but the visit itself went nowhere. Churchill, for his part, told Maisky in April 1936, “We would be complete idiots were we to deny help to the Soviet Union at present out of a hypothetical danger of socialism which might threaten our children and grandchildren.”

The British government, however, clung to appeasement in the face of Hitler’s mounting aggression. In 1937, Maisky expressed his consternation to Vansittart when Chamberlain appointed the credulous Sir Nevile Henderson as ambassador to Berlin. In his memoir Failure of a Mission, Henderson explained his approach thus:

“I was consequently determined, firstly, to do all in my power to associate with the Nazi leaders, and if possible to win their confidence, and even sympathy; and secondly, to study the German case as objectively as possible and, where I regarded it as justified, to present it as fairly as I could to my own government.”

When Maisky complained about this crew to David Lloyd George, the former prime minister “all but leapt out of his seat” and responded, “Government? Is it really a government? It’s rather an assembly of mediocrities, a group of hopeless milksops.” Meanwhile, Stalin was wiping out his own officer corps. When confronted by Churchill, Maisky tried to bluff it out, claiming that the Soviet autocrat was simply rooting out traitors. Churchill shook his head mistrustfully, Maisky wrote, but said “It is very comforting to hear all this. If Russia is growing stronger, not weaker, then all is well. . . . That Trotsky, he is a perfect devil. He is a destructive, and not a creative force. I’m wholly for Stalin.” In September 1938, when Maisky visited Churchill at his country estate, the old boy told him,

“‘In my cellar I have a bottle of wine from 1793! Not bad, eh? I’m keeping it for a very special, truly exceptional occasion.’

‘Which exactly, may I ask you?’

I was almost dumbstruck. Churchill’s hatred of Berlin really has gone beyond all limits!”

After the Soviet invasion of Finland in 1939, Maisky became a social pariah. Eden, among others, shunned him. An exception was Churchill who continued to argue that there was no basic collision of Anglo-Soviet interests and that Germany remained the main enemy. But Stalin himself was living in la-la land about Hitler’s true intentions. The Soviet leader, who thought that he could sit out the war, was apparently convinced that Hitler would only attack if he reached a separate peace agreement with the British. After Hitler attacked on June 22, 1941, Litvinov later observed, the Soviet leadership “believed that the British fleet was steaming up the North Sea for joint attack with Hitler on Leningrad and Kronstadt.”