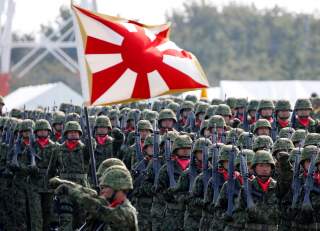 Long pacifist, Japan has decided to accelerate its military spending and effectively begin to gear up. It should hardly come as a surprise. Though Prime Minister Shinzo Abe has long sought to shift Japan from pacifism to what he calls a “normal country,” North Korea’s missiles and China’s aggressiveness in the Pacific would have left Tokyo little choice anyway. Spending has stepped up dramatically, as has planning. The nature of the buildup responds to other pressures from its great ally, the United States, which wants Japan to buy more U.S. equipment, as well as from the demographic and technological imperatives facing that nation.

Even now, some seventy-two years after Douglas MacArthur directed the writing of the then defeated Japan’s constitution, the document still limits the country’s room to maneuver. Spending cannot exceed 1.0 percent of gross domestic product (GDP). Though clever accounting allows wiggle room, this rule nonetheless imposes a severe constraint especially next to China and the United States, each of which spend more than 3.0 percent of their much larger GDPs on defense. Because the constitution stresses defense exclusively, it naturally questions any preparation to project power, not the least the Ministry of Defense’s (MoD) intention to construct two aircraft carriers and possibly base Japanese ground forces outside the country. The constitution also forbids Japan entering any mutual defense pact. Despite Japan’s long-term alliance with the United States, it cannot go to America’s aid if, for instance, a U.S. base in Asia was attacked. Prime Minister Abe has strived to change the constitution and has won concessions, but it remains a constraint.

The MoD budget requests for 2019 nonetheless make clear the new military emphasis. According to documents published in September, the MoD is asking for ¥5.3 trillion ($48 billion) in overall defense outlays, which is 7.2 percent above the 2018 budgeted amount. A jump like that would be noteworthy in any country, but especially so in Japan, where heretofore defense spending grows by fractions of a percent per year. Five-year plans would sustain this heightened level of spending. Still more interesting is the proposed allocation of these funds. Here, each point reflects the various pressures on Japan.

North Korea’s presence is probably most evident. The budget document emphasizes on “deterrence,” which no doubt lies behind the decision to upgrade the electronic warfare capability of Japan’s existing F-15 fighter jets and purchase six F-35A fighters from Lockheed Martin. New plans call for purchases of 147 of these new fighters over the next few years, well above the original plan to buy forty-two of them. U.S. pressure is also clearly evident in this decision, as it will preclude purchase of the domestically developed F-2 fighter. In the words of one Japanese security analyst, Masahiro Matsumura, Japan’s “defense industry is being sacrificed for the political goal of maintaining good Japan-U.S. relations.” Less controversial but also clearly aimed at the North Korean threat, the budget calls for Japan to upgrade its airborne early warning capability and spend nearly ¥300 billion ($2.7 billion) to deploy two land-based Aegis missile defense systems (“Aegis Ashore”) and other U.S. manufactured missile interceptors.

Measures to counter China, at sea mostly, make a longer list. Of course, the F-15 upgrades and the new F-35s constitute something of an answer to China. More pointed are MoD plans to procure RQ-40 Global Hawk long distance drones, fund research to develop a long-distance undersea unmanned surveillance device, and otherwise enhance naval heft by procuring more anti-air missile and anti-torpedo ammunition as well as more standoff missiles. Plans also call for the construction of a new submarine, aimed, in the words of MoD budget documents, at “detections, etc.” (The etcetera no doubt refers to offensive capabilities that might raise constitutional questions.) Japan also has plans to construct two new multipurpose, compact destroyers that can also sweep mines. They will bring the fleet escort force to a total of fifty-four vessels—a considerable upgrade from the past.

More controversial from a constitutional standpoint are other efforts that would: 1) enable the military to project power and 2) obligate Japan to its allies. The MoD seeks to procure a tanker to support the navy at sea, a clear statement that Japanese naval power has gone beyond coastal defense. The ministry also seeks two new C-2 transport aircraft and six more UH-X helicopters specifically aimed at rapid deployments. Also, it seeks a training budget to ready Japanese ground forces for more distant deployments. The ministry also seeks to refit an existing helicopter carrier over the next few years to carry some of the new F-35 fighters and then build a second carrier. In some interpretations, this clearly violates the self-defense strictures in Japan’s constitution, though the prime minister and the MoD have couched the requests in defensive terms. In what also might constitute a further violation of the constitution, the ministry has asked for concessions to allow greater integration of Japanese command, control, and planning with allies, the United States, obviously, but also India, Australia, and ASEAN, in other words those nations trying to check Chinese expansion.

Beyond these obvious countermeasures to North Korea and China, the MoD has also emphasized the need for modernization. It has set aside funds to establish what in the United States might describe as a cyber-defense command and to investigate the military use of artificial intelligence (AI). In a similar vein, the ministry has dedicated development funds to eventually install protections for Japan’s satellites, including an optical telescope with which to identify objects flying nearby. It has further dedicated a not insignificant ¥2.7 billion ($24 million) to work with the United States on what it calls “deep space international awareness.” Not only do these efforts capture further needs, but the budget document emphasizes that the military will help Japan cope with its long-prevailing low birth rate and the resulting shortfall in people who meet the military’s age requirements. One other aspect of this effort is the ministry’s remarkably un-Japanese push to put more women into uniform.

Even if not every yen makes it to its designated place, it is apparent that Japan will begin to alter the security equation in the Western Pacific in the not-too-distant future. If Abe manages to alter the constitution as planned, then the change will no doubt occur at an accelerated pace. It will alter Washington’s calculations. Beijing surely will also take note.

Milton Ezrati is a contributing editor at the National Interest, an affiliate of the Center for the Study of Human Capital at the University at Buffalo (SUNY), and chief economist for Vested, the New York based communications firm. His latest book is Thirty Tomorrows: The Next Three Decades of Globalization, Demographics, and How We Will Live.