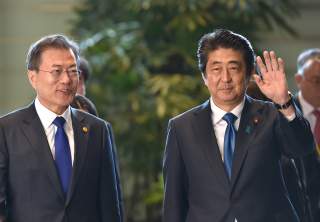 On December 20, 2018, following instructions from the government of the Republic of Korea, the Korean Coast Guard (KCG) and the Republic of Korea Navy (ROKN) went to the aid of a North Korean fishing vessel in distress in the East Sea (also known as the Sea of Japan). Aboard the vessel were four fishermen, one of whom had already perished.

The seas surrounding the Korean Peninsula is a very sensitive area where Exclusive Economic Zones (EEZs) overlap and maritime boundaries have yet to be agreed, resulting in confusion between national jurisdictions. This lack of clarity especially affects fishing activities.

The joint Search and Rescue (SAR) operation carried out by the ROKN and the KCG was in an area that Japan claims as its EEZ. The area is also a joint fishing zone that is shared by Japan and South Korea. The crew of the North Korean fishing vessel was successfully rescued by the KCG vessel Sambong (KCG 5001) with support from the ROKN KDX-1 class destroyer, Gwanggaeto the Great (DDG 971), and they were subsequently repatriated to North Korea through Panmunjom on December 22.

Also, on December 22, the Japanese government lodged a formal protest with the Republic of Korea (ROK) government, claiming that the DDG 971 had projected its STIR-180 tracking radar onto a Japanese Maritime Self-Defense Force (JMSDF) P-1 maritime surveillance aircraft operating in the vicinity of the SAR operation.

There have been claims and counter-claims made since by the two sides, including a video released on December 28 in which the crew of the P-1 claimed to have received a radar warning alarm on their aircraft and to have had voice communication with ROKS DDG 971 through channel 12, the international communication system used in the high seas. Japan claims that a radar-lock targeted the P-1 and that this constitutes a hostile act. However, the ROK denies that a lock was obtained, and accuses the P-1 of flying dangerously low, within 150 meters of DDG 971.

A clear distinction should be made between maritime SAR operations and actual naval warfare in sensitive maritime domains.

A SAR at sea is a humanitarian rescue operation that is part of maritime law enforcement, and if naval forces are involved they should be supporting coast guard vessels, as may be necessary particularly in open seas during rough weather. In such circumstances, navy vessels or aircraft are acting in a constabulary role, rather than in military or diplomatic one.

SAR operations are non-offensive and there should never be a reason for any coast guard or naval vessel involved in any kind of SAR operations, whether on the high seas or in territorial waters, to be construed as acting in a military or war-fighting capacity. During a SAR mission, all naval vessels and aircraft operating near the SAR operational area should be coordinated by national Rescue Coordination Centers, (RCCs), and coordination between RCCs is the responsibility of the International SAR Advisory Group (INSARAG).

The stance taken by Japan on this incident is best explained by political factors. The government of Prime Minister Shinzo Abe is currently suffering historically low approval ratings, and this situation clearly provides a useful pretext to stir up jingoistic sentiments in his base support. South Korea’s Supreme Court has also recently ruled that Koreans drafted into forced labor during World War II are eligible for compensation. In addition, the ROK has also renounced arrangements made by the previous administration to draw a line under the issue of Korean sex slaves, also used by Japan during World War II. Obviously, Abe is seeking an opportunity to strike back at Korea and is using the P-1 incident for political purposes.

The Japanese prime minister was interviewed by Asahi Shimbun on January 1, 2019, when he insisted that the ROK government should apologize for its “misleading operation,” and also called for the punishment of the commanding officer of ROKS DDG 971. The ROK perspective remains that this issue should be resolved as a military matter, given the security partnership between Japan and the ROK, in place since 2017 to deal with the North Korean military threat. This view was clearly communicated at the working-level meetings involving diplomatic and defense consultants, held on December 24 and 27.

Many experts in the ROK attribute the difficulties arising from such encounters to the fact that both Koreas are still technically at war, and SAR operations in the high seas off the Korean Peninsula suffer from the legacy of the Cold War. Any maritime operations off the Korean Peninsula by the ROKN or KCG, including SAR operations, must be sanctioned by an Operational Order in peacetime. Moreover, an on-scene commander arriving at the SAR operational area must adhere to stringent operational regulations in accordance with the Rules of Engagement imposed by the United Nations Commander in 1953. These rules are especially strict regarding the identification of North Korean fishing vessels, and the interpretation of and response to their behavior.

Furthermore, the area of operational responsibility established by the Joint Chief of Staff of the ROK Ministry of National Defense, together with the ROK-U.S. Combined Forces Command, includes parts of the EEZ claimed by Japan. This is essential to contain and deter North Korean military threats. Thus, the SAR operations of December 20 were not limited to humanitarian assistance but were also necessarily concerned with determining whether the fishing vessel was in distress, or whether it was a disguise for some more nefarious intention, such as a North Korean attack. For instance, the second Yeonpyeong naval skirmish of June 29, 2002, shows the importance of watching out for such attacks.

After more than fifteen years of experience on sea duties as a surface officer, I can confirm that the KCG has very limited capacity to conduct SAR operations in rough seas with a swell exceeding four meters, and such conditions also make it very difficult to identify vessels not equipped with the Automatic Identification System. In high seas SAR operations, it is normal practice for naval vessels and aircraft to try to coordinate with the on-scene commander of coast guard units to double-check identification and to agree on what should be done. Moreover, it is too early to say whether the actions of ROKS DDG-971 were appropriate to the situation, in particular, whether and under what circumstances it may have operated its target tracking radar.

The ROK government has asked the Japanese government to provide concrete evidence to verify its claim that the JMSDF P-1 was acquired in a radar lock, and this can be satisfied by exchanging SIGINT intelligence, which is surely appropriate for neighboring countries facing similar security challenges. It is entirely possible that the JMSDF was aware of the true nature of the SAR operations but ordered the P-1 to buzz ROKS DDG 971 as a deliberate provocation, in which case the P-1 may have been appropriately targeted as a potential hostile. Of course, this kind of behavior from the JMSDF would be very dangerous, since the Korean Peninsula is still technically at war. Whatever happened with the radar, we know that ROKN DDG 971 did not take any defensive precautions, such as going to General Quarters, to be ready for counter-measures against the P-1. Fortunately, the commanding officer of the ROKS DDG 971 did not do so because the P-1 was identified as JMSDF. He was doubtless confused, however, about what a JMSDF P-1 was doing so close to his ship.

For the time being, this issue appears to have become one matter among many others entangled in the deteriorating relations between Japan and the ROK. But we should remember that SAR operations are non-hostile and carried out for humanitarian purposes, so the unprofessional actions of the JMSDF P-1, in flying low over ROKS DDG 971, distracting from ongoing SAR operations for no good reason, are at best unfortunate, and at worst clearly provocative. Certainly, there are measures which can be taken to deal with any crisis situation between the ROK and Japan, such as the provisions of the General Security of Military Information Agreement (GSMIA) signed in 2016 despite internal South Korean opposition worried about resurgent Japanese militarism.

Before relations get even worse, we can hope that the United States will intervene to persuade both sides to tone down their rhetoric, and to find some practical resolution to this squabble. The aging and obsolete STIR-180 tracking radar of the ROKS DDG-971 may take some of the blame, but what was a sophisticated next-generation ASW-oriented maritime patrol aircraft doing in the area? Such aircraft are much too costly to use for SAR operations, so South Korea has to know why the P-1 was there.