Japan is Back on the World Stage 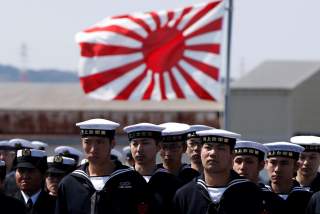 As I've written elsewhere, the much-vaunted diminishment of the liberal rules-based order—much of it at the hands of Beijing and Moscow—has become a defining feature of the age. Just a few years ago, pundits sought to frame international relations with the more prosaic-sounding “rise of the rest” and there were suitable and necessary debates on how the rules-based order should evolve to match the new power realities. Those debates were right and proper, and even morally necessary for the system to maintain coherence and legitimacy. After 2014, much of what should have been about rules-based evolution became power-based revolution. In February 2014, Russia "annexed" Crimea, and their "Little Green Men" marched into eastern Ukraine, breaking the Budapest Memorandum of 1994. In early September 2014, Chinese vessels began "reclamation" work on Johnson South Reef, a part of a busy shipping route to which they had no legal right.

While statements have been made to condemn these events, the fact is that the West is dismayed and confused in how to react. The election of a nonconformist president on trade and Brexit have not helped. Nonetheless, it is clear from the France-Japan 2+2 and the UK-Japan 2+2 that liberal democracies are beginning to band together. Not, as some would have it, to "contain" China, but rather to attempt to deter further adventurism and to buttress the rules-based aspect of the order. One can also see this in the scope and content of the U.S.-Japan-Australia trilateral and the U.S.-Japan-Australia-India quadrilateral.

What has perhaps been most remarkable about these groupings is the pivotal role played by Japan in them. After all, as recently as 1991, Japan had no close security partners besides the United States, and remained entrenched and immobilized by the pacifist Constitution and foreign policy that it had inherited from the postwar settlement. China and the Koreas notwithstanding, the revival of Japanese hard power and diplomacy has been welcomed and encouraged by the United States, Australia, and India as a return to normalcy—an unsurprising reintroduction of Japan to the family of nations. This has also characterized the views of many of those Japanese leaders inside the LDP, Japan's ruling party, including Junichiro Koizumi, Taro Aso and Shinzo Abe. While Koizumi is the first post-Yoshida Prime Minister of Japan, Abe has been in many ways, the most revolutionary and dynamic in terms of Japan's security policy regionally but also in Europe.

Under Abe's watch, Japan has not only passed significant legislation developing a national security apparatus, he has also passed legislation allowing for collective security with regional partners and introduced intelligence reforms that inhibit espionage inside the country. It is said that Japan is on the cusp of far-ranging intelligence reforms as well, particularly centred around the creation of a civilian-led intelligence agency, overseen by some sort of parliamentary process. Much of this has been done in consultation with those countries that Japan considers partners if not allies, including the United Kingdom, Australia, and of course, the United States.

Japan's push into Europe is now said to be beginning in earnest and one can see this in a number of ways. First of all, Japan and the EU are going to sign a free trade agreement—it is said, by the summer. This will immediately push Japan past China, South Korea, and even the United States, in the EU's estimation as an economic partner of significance. China is currently the second largest partner, while the United States is the first largest partner, with Japan coming in at a modest seventh place. Layered atop this new economic importance to Europe, Japan's ties with France and United Kingdom are proceeding steadily.

The France-Japan 2+2 began in 2014, the same year that China and Russia began to use military force to challenge the rules based order. The following year, the UK-Japan 2+2 began meeting. Both bilaterals bear more than a striking resemblance to the Japan-Australia bilateral in that they remain noncommittal, but nevertheless seek to institutionalize cooperation in the types of sectors traditionally reserved for close allies. Thus, both London and Paris have agreed to Arms Transfer Agreements with Tokyo, allowing for greater defense collaboration at the defense industrial level. With France, the Japanese are exploring a possible undersea mine-clearing UAV, while with the United Kingdom, the Japanese have looked into putting Mitsubishi Electric sensors into the British Meteor missile. Since both are top-tier partners on the American F-35 program, they are now carrying out a study to see if the resulting missile will be interoperable with the fighter.

There have also been a number of other small steps. The United Kingdom, for example, signed a logistics agreement in 2015 known as an Acquisition and Cross-Servicing Agreement (ACSA). The ACSA enables British forces and their Japanese counterparts to exchange food, fuel, ammunition and carry out other logistical practices together. The defining purpose is interoperability. While France and Japan have not yet signed an ACSA, their joint statement implied that progress was being made on the logistical agreement.

So what are the drivers for Japan in all this? Well, as has been mentioned, insecurity has played the primary role. Tokyo sees these security partnerships and defense industrial collaboration as a way of developing quasi-alliance ties with a number of Western states as a means of balancing against what may become a threatening Chinese rise. But not all is grand strategy. Japan faces—like other advanced economies—defense inflation, that's to say the growing research and development costs of defense industrial capacity. One need only look at the computing power of the most recent advanced fighters, compared to their ancestors sixty years ago. In moving towards mid-sized defense industrial powers, like France and the United Kingdom, Japan is clearly looking to pick up tips on how to make a leaner R&D process, how to create open tenders and how to structure the acquisition process internally. The question will be of course, whether these security partnerships morph into full-blown alliances. At their present state, it is not clear that they are sufficient to buttress the much-needed rules-based order.

Image: Under Abe's watch, Japan has not only developed a national security apparatus, but pushed for collective security with regional partners.