Japan and India: A Special Relationship? 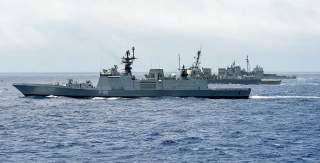 Indian Prime Minister Narendra Modi’s recent three-day visit to Japan is a sign that the bilateral relationship between India and Japan is headed for newer heights. More importantly, there seems to be a palpable method to this resurgent Asian connection that does not just attempt to restore the balance of power in Asia. The two sides are astutely restructuring regional formulations in the Asian geopolitical theatre through a mix of economic, political and strategic accomplishments. India was able to draw Japan’s support for membership in the Nuclear Suppliers Group (NSG), negotiate small but significant progress in the Mumbai-Ahmedabad bullet train timeline, ease Indian student visas and facilitate the training of 30 thousand Indians in Japanese manufacturing practices.

Two other developments that took place during Prime Minister Modi’s visit to Japan could turn the India-Japan relationship into an unwavering geostrategic alliance in Asia. One is the decision by both the countries to merge their contiguous maritime corridors to create a single geostrategic maritime expanse running from the Far East up to the western Indian Ocean. Modi’s Japan visit drew assurances for merging India’s “Act East Policy” with Japan’s “Free and Open Indo-Pacific Strategy.” The second is the significant progress made in negotiations for the sale of Shinmaywa US-2i search and rescue aircraft from Japan to India. Both of these developments could recalibrate the Asian power balance by resetting the maritime heft in Asian waters, which has increasingly tilted in China’s favor since the beginning of this decade.

When India and Japan committed to work together for the "peace and prosperity of the Indo-Pacific region and the world" in December 2015, it presaged a new bilateral relationship that would have bearing on regional order. The latest decision to merge India’s eastward regional maritime strategic reach with Japan’s westward approach to Asian waters has added a new element of resolve in the intended maritime policy corridor that spreads well beyond the Indo-Pacific in its scope and intent. Both countries replaced the hackneyed “Indo-Pacific” with terms like Pacific Corridor and India-Pacific. The semantic play at work here cannot be ignored. The move projects both India and Japan as important security nodes in the Pacific corridor and advances India’s long-held desire to play the net-security provider in the region.

Resurrecting Cooperation in the Indo-Pacific

The Indo-Pacific region has been on the geostrategic radars of both countries ever since the Japanese Prime Minister Abe proposed cooperation in the region in his famous 2007 speech. From India’s point of view, the region assumed special policy significance when the Modi government changed its erstwhile “Look East Policy” to “Act East Policy.” In 2015, both countries identified the Indo-Pacific region as the “epicentre of global prosperity” and decided to cooperate under the banner of “Proactive Contribution to Peace” based on the principle of international cooperation. This, Japan highlighted, would be achieved through a special partnership with India. In the past, both countries have shown interest in maintaining stable seas across Asia. Cooperation in the Indo-Pacific region is critically important for both countries as the maritime expanse of the region ties the Pacific Ocean, the South China Sea and the Indian Ocean in a single riparian strand.

Both India and Japan also find convergences in their common goal of maintaining stability of the seas. Cooperation in the Indo-Pacific region will be mutually beneficial. For Japan, it will help strengthen the “three principles of the rule of law at sea” outlined by Prime Minister Shinzo Abe:  making and clarifying claims based on international law; not using force or coercion in trying to drive claims; and settling disputes by peaceful means. On the other hand, through its cooperation with Japan and other Southeast Asian countries like Malaysia and Vietnam, India will seek to fulfill the promise that it echoed in its joint statement with the United States: U.S.-India Joint Strategic Vision for the Asia-Pacific and Indian Ocean Region. More recently, India has tried to raise its stakes in the South China Sea like never before.

The deal between India and Japan for the US-2i ShinMaywa amphibious search-and-rescue aircraft currently being worked out carries immense potential for extending India’s security perimeter to its east. The deal for procuring US-2i from Japan could enhance India's capabilities for search, rescue and surveillance over the Indo-Pacific and the Indian Ocean waters. India's deal with the United States to procure the Boeing P8I (Poseidon Eight India) Long Range Maritime Patrol aircraft can serve as motivation for the ongoing negotiations.

The words in the India-Japan joint statement, coming on the heels of Donald Trump’s victory, explain that Japan might well be bracing for a withdrawal of support by the United States. There are legitimate concerns that both Japan and India would have to deal with an Asian order in which the United States is not spearheading a partnership of countries against China’s bellicosity. Such concerns have moved closer to reality with emerging reports that the United States under a Donald Trump presidency could well join the regionally destabilizing Chinese initiative One Belt One Road (OBOR). Amidst other serious concerns that the United States might pull out of Asia under Trump, both Japan and India have a real opportunity to reassess the terms of their future engagements and fill the void left by the United States in the Asia-Pacific. While Japan can ponder over a regional order without the “pivot to Asia,” India could look to engage other countries to its east, in what would comprise a resetting of its Act East policy. As such, both Japan and India could relocate their nodal convergences in the Asia-Pacific to mutually beneficial pursuits ranging from the Far East to the East African Coast. Such engagements carry the potential to go beyond the two countries’ neoliberal promises to include strategic concerns. Prime Ministers Abe and Modi have depicted such resolve through their recent policy moves.

If the Trump Administration does maintain U.S. engagements with Asia, it is possible that the Quadrilateral Defense Initiative (QDI) could see a revival, bringing together the United States, Japan, Australia and India once again, albeit with rehashed intents, capabilities and promises. India evinced this desire by accepting Japan as a permanent member in the Malabar naval exercises — the largest bilateral military exercises between the United States and India. While Japan, in a revisionist move, passed legislation in its lower house in 2015 shedding more than half a decade of military conservatism, India has shown unprecedented willingness under Modi to internationalize the South China Sea issue. India proposed, although unsuccessfully, to Singapore last month that the two countries make specific mention in a joint statement of the Hague-based international tribunal order in July this year dismissing China's “historical” rights over almost all of the South China Sea. More recently, India made sure that the South China Sea received an irking mention in the India-Japan joint statement when Modi visited Japan earlier this month. India and Japan asserted that the South China Sea dispute should be resolved under the auspices of United Nations Convention on the Law of the Sea (UNCLOS).

Closer to home, India has moved to engage countries like Vietnam, Myanmar and Bangladesh through credit lines and infrastructure projects, and in turn has sought a tacit mandate to expand its regional security role. Japan too, has allocated $700 billion over five years to finance infrastructure projects across the world under the Expanded Partnership for Quality Infrastructure (EPQI) initiative. India’s Convergences with Japan in the maritime domain will inevitably crisscross with China’s Maritime Silk Road initiative and present an opportunity to counter China’s gradual expansion beyond its traditional nine-dotted line, well into the Indian Ocean. The India-Japan joint statement also mentioned the interests of the two countries to jointly develop the Chabahar port in Iran; a signal that an India-Japan counter OBOR strategy might well be under consideration. This is particularly true given that the two countries are expanding their domain of cooperation up to the African continent.

By virtue of the distance between the two Asian countries, cooperation between India and Japan finds iteration primarily in the maritime domain. The two countries have legitimate interests in cooperating to maintain stability and security. This requires constant cooperation through exercises and interactions between Indian and Japanese security forces. The two countries cooperate with each other through regular interactions and exchanges between the Indian Navy and the Japanese Maritime Self Defense Force and their respective coast guards, and through annual joint military exercises such as the Malabar naval exercises. This trend is set to increase if the pending deal on the US-2i ShinMaywa amphibious search-and-rescue aircraft materializes.

Overall, prospects for a stronger India-Japan alliance have been advanced by Modi’s visit to Japan.