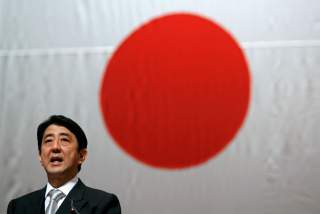 Between June 19 and 21, 2018, Russia conducted missile-firing drills on Iturup, one of the four disputed Southern Kuril islands that are claimed by Japan as its Northern Territories. Although the Japanese Ministry of Foreign Affairs did issue a statement saying that the exercises were inconsistent with Japan's position and regrettable, Tokyo's response was muted. This fits a pattern of surprising Japanese indifference in the face of heightened Russian military activity.

In the last fiscal year, Japan scrambled jets 390 times to intercept approaching Russian aircraft. This figure was up by eighty-nine from fiscal 2016 and was only exceeded by the 500 scrambles provoked by China.

Russia’s military presence on the Kuril chain, which Japan controlled until 1945, has also increased. In November 2016, just ahead of President Putin’s visit to Japan, Russia announced the deployment of new anti-ship missiles to Iturup and Kunashir. At the start of 2018, Moscow ruled that combat jets could be deployed to Iturup. Construction is also beginning on a naval facility on Matua in the Northern Kurils, at the site of an old Japanese base.

Internationally, Moscow's growing military capabilities and allegedly destabilizing behavior have caused the United States to identify Russia as a major security threat. Japan, however, evidently does not share its ally's concerns. In addition to being reluctant to criticize Russian military activity in the region, the Japanese government is firmly committed to enhancing bilateral ties. These efforts have included twenty-one meetings between Prime Minister Abe and President Putin, as well as the pursuit of an eight-point economic cooperation plan.

Less often noted is that Japan is actively engaged in developing security cooperation with Russia. This goal is set out in the country’s most recent Diplomatic Bluebook. As well as describing the Japan-Russia relationship as “the bilateral relationship with the greatest potential,” Japan’s guiding document states that “building appropriate partnership relations with Russia in the region will contribute to Japanese national interests and regional peace and prosperity.”

Concrete steps have included the start of “2+2” talks between the countries’ foreign and defense ministers. This format, which is usually reserved for close security partners, was launched in 2013 and the third such meeting is expected to be held in Moscow on July 21. There is also regular contact between Yachi Shōtarō and Nikolai Patrushev, the heads of the countries’ security councils, and Japan has played host to senior Russian military officers, including Head of the Army Oleg Salyukov and Chief of the General Staff Valery Gerasimov in November and December 2017. These meetings are contentious since Patrushev and Gerasimov are subject to Western sanctions for “worldwide malign activity” and for threatening the territorial integrity of Ukraine. Japan and Russia also continue to hold small-scale annual exercises between Russia’s Pacific Fleet and the Maritime Self-Defense Forces.

Japan’s willingness to ignore what others regard as Russia’s pattern of international aggression has caused bafflement in Western capitals. Furthermore, this has given way to anger when Japan has shown reluctance to condemn Russia for its most egregious actions, including its military intervention in Ukraine. Moreover, Russia was responsible for the shooting down of Malaysian Airlines Flight 17 in July 2014 and allegedly poisoned Sergei and Yulia Skripal in March 2018. Given all of this, what explains Japan’s policy of constant accommodation towards Moscow?

Echoes of the Soviet-Japanese Neutrality Pact

Prime Minister Abe says that he wants to maintain positive relations with Russia to pursue a breakthrough in the countries' territorial dispute. Yet this is only part of the reasoning, not least because Abe must realize that there is no serious prospect of the four islands being returned. A more fundamental explanation is that Tokyo's Russia policy is shaped by Japan's deteriorating security situation and its leadership's attempts to plan for a future regional crisis.

Speaking at the end of 2017, Abe warned that Japan is facing the “most severe security environment ever” in the post-war era. This consists of an assertive China, a nuclear-armed North Korea, and a United States whose commitment to its allies is regularly called into question by President Trump. In this context, the Japanese leadership realizes that it needs to take a more proactive approach to security.

The Abe administration is, therefore, aiming to develop Japan’s military capabilities and to loosen restrictions on their use. It is also looking to diversify Japan’s security partners, primarily by deepening defense ties with Australia, India, and some European powers.

When it comes to Russia, Japan’s goal is more specific. Japanese strategists see Russia as a country in a long-term decline with an unfavorable economic outlook. On its own, it does not pose a threat to the status quo in East Asia. Japan’s concern, however, is that Russia’s isolation from the West since the annexation of Crimea has caused Moscow to increasingly make common cause with Beijing. In the event of a regional crisis, such as clashes over the disputed Senkaku Islands, Tokyo’s nightmare is that it would face a Sino-Russian united front, while support from the United States would be equivocal.

To neutralize this danger, the Japanese leadership has sought to avoid antagonizing Russia and has tried to use cooperation to encourage the Russian leadership to distance their country from China. This has echoes of Japan’s motivations for signing the Neutrality Pact with the Soviet Union in April 1941. On that occasion too, the aim was to secure Japan’s northern frontier so that attention could be focused on more pressing security concerns. The 1941 agreement was also relevant to China since it was intended as a way of stopping Moscow from providing military aid to Chiang Kai-Shek’s nationalist forces during the Sino-Japanese War.

Although the logic of Japan's security policy towards Russia is clear, it is unlikely to prove fruitful. For a start, the relationship between Moscow and Beijing continues to become ever closer. This was reaffirmed when Putin met Xi Jinping in Beijing in June, and the Chinese leader hailed the Sino-Russian relationship as "the highest-level, most profound and strategically most significant relationship between major countries in the world." The fact that this relationship has not developed into a full alliance owes nothing to Japan's efforts but is instead because neither side currently sees the need to involve themselves too deeply in the other's international problems. It is also apparent that Japan's attempts to foster security ties with Moscow have not led to a reduction in Russian military activity on Japan's northern frontier.

The realpolitik of Japan’s Russia policy is also regrettable because it has contributed to divisions within the G7. This was most apparent in the aftermath of the Skripal incident when Japan was the only G7 member not to expel Russian diplomats. Additionally, Japan’s policy contributes to the fraying of the rules-based international order. Within the Indo-Pacific region, Japan rhetorically supports the values of freedom and openness, seeing this as a way of countering China’s alleged attempts to change the status quo by force. And yet, by turning a blind eye to Russia’s aggressive behavior in other regions and by failing to demonstrate solidarity with fellow liberal democracies in the West, Japan is undermining the very principles it purports to uphold.

The Japanese leadership is right that the country is facing an insecure future. However, these growing threats are best-countered by consistently committing to the rules-based international order and by deepening cooperation with partners that share common liberal values. This certainly does not mean adopting an anti-Russian policy or ending all types of engagement. It does, however, mean forcefully condemning Russian violations of international law and taking meaningful countermeasures, rather than the token sanctions introduced by Japan after Russia’s annexation of Crimea in 2014. Failing to do so risks contributing to the emergence of an everyone-for-themselves, might-makes-right world in which Japan is particularly ill-equipped to prosper.

Some in the United States might feel aggrieved that their main Asian ally appears indifferent to the threat that Russia is deemed to pose to the West, especially after Moscow’s apparent interference in the 2016 US elections. This could be seen to justify criticism of the sort made by Donald Trump in August 2016 when the presidential candidate asserted that the US-Japan security relationship is unfair since “If we’re attacked, Japan doesn’t have to do anything. They can sit home and watch Sony television, OK?”

When it comes to Japan’s Russia policy, however, it is necessary to consider the extent to which the United States has contributed to the Abe administration’s pursuit of security ties with Moscow. Despite the personal interest that Prime Minister Abe is sometimes said to have in Russia, Japan’s current policy is driven, not by any sense of affection, but by a calculation of strategic needs. In previous decades, Japanese governments felt confident enough about the US security guarantee that they were able to take a firm stance vis-à-vis Moscow. Recently, however, the combination of a rising China and Washington’s “America First” rhetoric has encouraged the Japanese leadership to adopt a conciliatory policy. Additionally, given President Trump’s own curiously favorable attitude towards the Putin regime, which recently included his call for Russia to be readmitted to the G7, there is little prospect of Abe’s pro-Russian policy receiving criticism from the White House.