The Japan Self-Defense Force: A Crisis in the Ranks 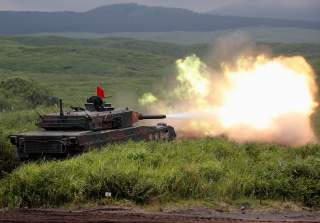 The Japan Self-Defense Force (JSDF), the country’s military forces, is facing a crisis. But this crisis doesn’t involve hardware or equipment and cannot be solved by buying F-35 stealth fighters or converting amphibious ships into aircraft carriers. Rather, the crisis is in the ranks. If unaddressed, Japan will eventually be unable to defend itself and incapable of providing adequate support to the U.S.-Japan alliance.

Japan’s shrinking population is one reason for these low numbers, but not the main reason. Rather, the JSDF is simply an unattractive career option for most young Japanese. Tokoyo knows it has a problem but doesn’t know what to do.

The government might start by comparing the terms of service for U.S. military personnel in Japan and the JSDF’s Jieikan, as Japanese service members are known. Indeed, American service members living in Japan who sometimes brush shoulders with the JSDF would be surprised at the facts.

For starters: JSDF salaries are about half that of an American service member of equivalent rank and time in service. Likewise, American personnel and their families enjoy government provided or funded housing (on or off-base), commissaries and PX’s, tax-free COLAs, free medical care, on-base schools, educational benefits, recreational facilities, fully covered moving costs and the like.

Things are not nearly so plush for JSDF service members or their families.

Consider housing: Jieikan have to pay rent—even if living on-base. And if they live off-base they receive only twenty-seven thousand yen (about $250/month) towards rental expenses. This in addition to paying deposit and key money (a non-refundable payment of one month’s rent in “gratitude” to the landlord for being allowed to rent) out of their own pockets. They can, of course, borrow money from the local JSDF welfare section, but at a 4.26 percent interest rate—higher than what Japanese banks charge. Not surprisingly, few Jieikan borrow the money.

On-base housing is old, tattered and cramped. It is rarely newer than twenty years old and often far older—and has not been refurbished in decades, if ever. Additionally, service members pay their own utilities. They also must pay a “common area” utility fee each month, in addition to a monthly fee for parking on base. As for grounds maintenance and lawn mowing, Jieikan of all ranks either do it themselves or pay extra for a private company to do so. This can cost as much as seventeen thousand yen ($150) to fifty thousand yen ($450) per year depending on where the Jieikan is stationed.

Unlike the U.S. military, personnel of all ranks live in the same building. And all ranks—including officers—who live in on-base housing take turns cleaning up hallways, stairs and trash areas. In effect, Jieikan are the custodial staff.

Jieikan families also have to provide their own stoves, microwave ovens, refrigerators, washers, dehumidifiers and curtains. And if a Jieikan family wants air conditioning, they buy the air conditioner themselves—though many can’t afford to actually use these. The same applies when it comes to heating. Even if transferring to cold Hokkaido you must buy your own heater for about $1,500 (assuming you can manage with only one)—though Jieikan will receive a modest allowance for fuel each month.

On the U.S. bases, if something breaks in the quarters, residents call the maintenance department to fix it. For the Jieikan, they must arrange for private repairmen to make the repairs and pay for everything themselves.

It’s also better to be sick or injured on a U.S. base. If an American service member or a family member needs help, then there is a hospital to take care of them. A JSDF base has a clinic that can provide simple care for the Jieikan himself. Family members must go outside. The same goes for schooling for children—there is none on base.

Transferring to a new duty station is also a stark contrast with the American service members’ experience. When Americans transfer to a new posting, it is considered stressful, especially for spouses. Imagine if they had to do what JSDF people do when “PCS-ing.” Divorce rates would skyrocket.

First, Jieikan are subject to a detailed quarters inspection by a JSDF “building manager” who points out needed repairs no matter how pristine things are. Then, the Jieikan resident has to coordinate with the house cleaners, painters, tatami repair companies, etc., to make necessary fixes. The total cost can easily reach one hundred thousand yen ($900) or more. And who pays for it all? The Jieikan.

As for packing and moving, the Jieikan must buy the cardboard boxes, pack them, and make their own arrangements with a moving company they have located and hired. And since most JSDF personnel transfer during March, since it’s a “peak season,” (or, to the moving companies, a captive market) fees skyrocket. As an example, hiring movers to transport household goods from Kanagawa prefecture near Tokyo to Kyushu in southern Japan costs the Jieikan about 500,000 yen ($4,545) for two people (a husband and wife). If they have two children, then it can cost twice that amount—around a million yen ($9,090).

Not surprisingly, instead of saving money for vacations, a car, education, or other personal or family uses, JSDF members have to save up money from their salaries simply to be able to afford to PCS. One JSDF officer who was transferred in March this year calculated it cost him over $10,000 for moving and associated expenses.

As for Temporary Lodging Allowance (TLA) that Americans service members expect and that cover all living expenses during the transfer period (for a maximum of 120 days), JSDF personnel receive a maximum sixty-five thousand yen ($590), and are allowed at most five days of TLA coverage—depending on the moving distance and the service member’s rank. However, most Jieikan do not even receive “full TLA,” since the TLA qualification requirements are so complicated. Instead, they usually pay TLA costs themselves.

Jieikan do receive an annual bonus of four times their monthly salary. But the money is eaten up by housing loans, school fees for children, family living expenses, and, of course, moving fees.

In short, the JSDF Cost of Living Allowances are a pittance compared to what American service members receive.

Not surprisingly, to save money many JSDF families “stay put” in the family home while the service member transfers by him/herself until hopefully someday being reassigned close enough to be reunited with the family—or until retirement.

What about family allowances?

For the American service members there is a pension to look forward to: it’s half-pay after twenty years, and two-thirds pay after thirty years—starting immediately and for life.

In the JSDF, upon retirement (after serving a minimum of twenty years), a JSDF member receives a taxable one-time payment. A senior field grade officer will get around forty million yen ($363,000) while a senior enlisted will receive around thirty million yen ($272,000).

But consider the following:

A retired U.S. military service member will receive between three times to ten times the pension payout of a JSDF Jieikan of comparable rank—assuming each lives another thirty years after retirement.

And post-retirement, what is it like for the Jieikan? Medical care? None. Educational benefits? None. Housing loans? None.

A retired U.S. Navy officer who served many years in Japan and worked closely with the JSDF commented on the plight of the Jieikan:

I reflect on my own career and all that our government does for military members and the amount of care and attention lavished on veterans and retirees…. And then you meet JSDF guys who are among the hardest working and patriotic people on the planet and they get nothing – nothing -- but intrinsic reward for what they endure. No PXs, no ID cards, no MWR, little in the way of health care (but not for families), etc. etc. etc. God knows they aren’t doing it for the money… so they must be really motivated by the internal reward that their hidden internal patriotism affords them. Quite frankly, I am in awe of them regularly.

And as for “work-life” balance? There is little of that in the JSDF—owing to too many missions and too few people.