Japan Should Steal a Strategy from China's Playbook 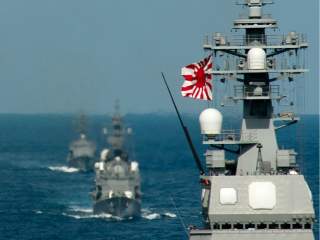 Recent tensions in the South China Sea have been receiving an inordinate amount of attention, especially following Beijing’s island and infrastructure construction activities as well as missile deployments, the U.S. Navy’s freedom of navigation operations and incidents involving coast guard forces and fishermen.

By contrast, tensions in the East China Sea (ECS) appear to have abated. But the picture can be misleading; while Chinese coastguard intrusions into waters surrounding Japanese-administered Senkaku/Diaoyu Islands have appeared to decline in numbers, the present and foreseeable future situation remains far from comforting.

There is not merely the China Coast Guard’s introduction of armed patrol vessels off the disputed isles. The People’s Liberation Army (PLA) continues to expand its air and naval force projection capabilities in the ECS, with an eye beyond into the Western Pacific open waters.

Beijing has nowhere in the ECS to build “islands,” except for the numerous offshore hydrocarbon platforms it has built—they ostensibly also have a surveillance role—to count as permanent structures to assert its claimed sovereignty over the disputed gas fields and the Senkaku/Diaoyu Islands.

However, even while the PLA Navy (PLAN) is still trying to get to grips with its nascent aircraft carrier capabilities, the PLA is already ramping up its ability to project force from China’s mainland bases, with two broad strategic objectives: firstly, to impose an anti-access and area denial (A2/AD) umbrella against American intervention and Japanese military operations in times of contingencies in the ECS; and secondly, to expand China’s access into the Pacific Ocean and safeguard its broader national maritime interests.

The steps undertaken to date have been incremental but no less significant. At present and into the foreseeable future, the PLA’s conventional military capabilities are set to continue improving. These have greatly narrowed the gap between Chinese and Japanese (and American) capabilities that existed a decade ago.

If one recalls the past incidents involving PLAN submarines near Japanese shores and the more recent activities by Chinese intelligence-gathering aircraft and vessels, it is obvious that in the longer term, Beijing seeks to further entrench its military presence in the ECS.

The observed, recurrent patterns of PLA activities indicate a particular interest in the Nansei Shoto.

Towards a Solution for Japan

While the PLA’s burgeoning capabilities in the ECS are troubling, one notes that A2/AD works both ways. The Japan Self-Defense Force (JSDF) is equally capable of establishing its own defense posture that can complicate Chinese military activities in the ECS or the western Pacific Ocean.

Operating from the Nansei Shoto along the eastern edge of the ECS and reaching out westwards, the JSDF can create a hard-to-penetrate layered defense network or “fan” consisting of land-based antiship and antiaircraft missiles, submarines, antisubmarine aircraft, surface combatants, “smart” and “dumb” sea mines, and fighter jets. The JSDF also has the added advantage of operating from a defensive posture.

The recent activation of a coastal surveillance unit on Yonaguni Island at the far southern end of the Nansei Shoto might be viewed as a first step towards a viable Japanese A2/AD strategy. Plans call for similar units on other islands up the entire chain. While billed as “surveillance” units, these outposts are slated to be equipped with mobile antiship missile batteries and air-defense systems to bolster Japan’s A2/AD capabilities.

However, even though a Japanese A2/AD strategy for the Nansei Shoto and broader ECS is conceptually simple, it is not easy to implement. So far, the JSDF has not managed to establish an effective joint capability—either operationally or in terms of command and control structures—to include lack of sophisticated communications networks allowing seamless inter-service communications as a manifestation of this problem.

Clearly, this is a problem that needs to be corrected for an effective Japanese A2/AD strategy in the ECS. For the JSDF to develop its own A2/AD capabilities, no single service can play a decisive role. Therefore, the JSDF needs to focus on effectively and efficiently using its air, sea and ground assets through greater integration and improved coordination.

First, the JSDF services need to overcome their longstanding political and bureaucratic reluctance to cooperate for joint operations. Correcting this self-inflicted handicap will allow the JSDF to become a far more effective force.

To deal with this shortcoming while becoming better able to defend the Nansei Shoto and its broader ECS interests, the JSDF should establish a permanent standing force, termed here as Joint Task Force (JTF) Nansei Shoto, charged with protecting Japan’s southern territorial assets

This JTF will serve a “forcing function” to draw the separate JSDF services together and finally achieve a useful degree of joint operational capability. This hopefully will help overcome the current “haphazard” approach to Nansei Shoto defense whereby each service operates more or less independently of the others.

Second, the development of “joint” operational protocols and filling readiness gaps between the three JSDF services will make or break the JSDF’s actual effectiveness, as will the development of specific operational skills. The ASDF and MSDF have been exposed to actual confrontational situations such as incursions whereas the GSDF so far has not. Indeed, the GSDF has only recently shifted towards becoming a more mobile, rapidly deployable force able to operate in maritime environment of the Nansei Shoto.

Given its geographical and physical features, air and maritime capabilities constitute the linchpin of Japan’s defense, but there are key land features in the Nansei Shoto, and the GSDF also has an essential role to play. Thus, the GSDF needs to improve its capability level—particularly in the defense, and if necessary, the retaking of offshore islands.

In this regard, the GSDF’s recent collaboration and coordination with the U.S. Marine Corps and U.S. Navy to develop its amphibious combat capabilities (that are by definition “joint”) can be deemed a significant step forward, though much more remains to be done. The next logical step—and indeed, a prerequisite for JSDF success given that each service does what the others cannot—will be to further integrate these new GSDF capabilities with sister branches to enhance joint readiness.

Finally, the three JSDF services need to further update and integrate its doctrines and protocols to contextualize and sharpen their respective capabilities for battlespace maneuvers and operational readiness. Doing so will further enhance and combine the three branches’ niche capabilities to promote effectiveness and efficiency in joint operations. Systemizing such developments, however, will require doctrines and protocols to further develop specific capabilities among the individual services, but also emphasizing the importance of joint operations by promoting the “all for one, one for all” mindset. The MSDF and GSDF’s impressive performance during the Dawn Blitz 2015 exercise shows what can be done when JSDF services decide to cooperate.

The recent series of policy developments such as the U.S.-Japan Defense Cooperation and the Legislation for Peace and Security do necessitate further and bolder updates to the JSDF’s doctrines in order to translate those changes into actual capabilities.

In the alliance context, Tokyo’s position in the ECS will be greatly enhanced by linking American and Japanese forces as closely as possible. This should be a high priority for both sides to further develop the alliance as a force-multiplier, as opposed to an alliance that compensates Japan’s weaknesses. In particular, greater coordination and interoperability between the two militaries’ ground, maritime and air assets will be essential.

The relocation of key JSDF commands into U.S. bases such as Yokota and Zama, neighboring naval facilities in Atsugi, Sasebo and Yokosuka, and the increased frequency of command and field exercises are positive steps forward in promoting greater communication and interoperability. Yet the developments are still somewhat incremental, and the momentum should not end there. Efforts to further advance the U.S.-Japan alliance’s capabilities are needed to apply and utilize the benefits from these developments to defense of Japan’s territory and the alliance’s strategic ends.

There are no easy solutions for Japan in the ECS. China will continue to exploit “gray-zone” peacetime challenges using coast guard and fishing vessels (especially those manned by the maritime militia) to pressure and wear down Japanese resolve, with the PLA’s armed might looming in the shadows.

Therefore, Japan’s efforts to upgrade the JSDF into a genuinely “joint” force and to finally establish a real military presence—effectively an A2/AD network—in the Nansei Shoto become essential. The human experience, at least as far back as Nehemiah rebuilding Jerusalem’s walls over 2,500 years ago, shows that if one is able and willing to defend oneself, one is less likely to actually need to do so.