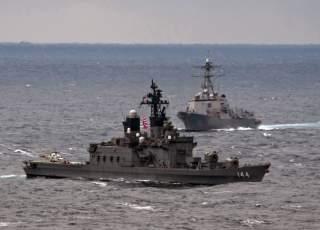 Japanese prime minister Shinzo Abe is in town, so naturally you’ve been hearing an array of U.S. foreign-policy elites fawning over the PM and telling Americans how vital the U.S.-Japanese relationship is to the United States. Unfortunately, none of them so much as mention the more important point: However valuable the relationship is to the United States, it’s an order of magnitude more important to Japan. If our officials and pundits would emphasize America’s importance to Japan, rather than the other way around, there might be some hope of winding down Japan’s decades of free riding on the backs of the U.S. taxpayer.

Consider the deliverables announced from this highly touted visit: The United States gets to work more closely with Japan’s military in countering China, plus it promises (again) to defend some worthless rocks claimed by both China and Japan that hold the best chance of starting World War III. In return for these multibillion-dollar favors, Japan will sing in the chorus of support for the Trans-Pacific Partnership (TPP), a militarized trade agreement that is designed to bind Asian states to the United States and distance them from China. Tokyo also agreed to cooperate with U.S. efforts on humanitarian relief, cyber threats and intelligence issues.

The two sides issued a dry joint “vision statement” that ambitiously promised to “update our respective roles and missions within the Alliance and enable Japan to expand its contributions to regional and global security.” Except it’s far from clear that Japan will choose to, or even be able to, expand its contribution to regional (to say nothing of global) security. And the reasons have a lot to do with U.S. policy.

The best argument for U.S. policy in Asia—the “pivot,” or “rebalance,” or whatever one wants to call it—was that it was built on a sounder foundation than U.S. Middle East policy, which is damning it with faint praise. But the essential facts that the most dangerous troublemakers in international politics are big, powerful states and that China is becoming a big, powerful state are irrefutable. The question lies in how to make states with more at stake bear an at-least-proportional share of the burden of ensuring that China doesn’t attempt to bully and coerce its way to hegemony in Asia.

And both the United States and its Asian allies have made a hash of things. In fairness, they’re carrying on a long tradition of encouraging free riding on the part of U.S. allies. But in the context of China, things are particularly problematic. American economic policies are helping the Chinese economy grow, while our military policies are aimed at preventing it from gaining more influence. All the while, major Asian powers like Japan are both declining and garnering promises of closer cooperation from the United States. The longer this goes on, if we assume anything close to steady 7-percent growth in China, the harder it will be to sustain for the United States.

Put differently, “we agree to defend to [Japan] and they agree to let us.” One can see why this is a great deal for Japan, but it’s harder to see why this arrangement serves the U.S. national interest.

To be sure, some of the movement in Japan has been salutary on this front. And Abe’s defenders will point out that the political traditions and obstacles he has overcome already were tough in and of themselves. All of this is true. To take one example, Japan’s defense spending has risen trivially—more than 1 percent per year from 2008 to 2013, according to IISS—while its economy has continued to disappoint. But not only is Japan’s current defense spending inadequate, its ability to increase defense expenditures is going to be hampered going forward if, as seems likely, its economy continues to sputter and its demographic profile continues to appall.

But in order to change the arc of U.S. relationships in the region, some shock therapy appears necessary. Citizens of U.S. allies and clients should be told that Americans will not shoulder their burdens of defense indefinitely. In a country like Japan, whose foreign-policy mindset seems to have two speeds, shrugging pacifism and manic nationalism, threading the needle will be difficult. But the alternative is to try to contain China mostly on our own, while both our allies and our economic policies make that task harder.

Justin Logan (@JustinTLogan) is director of foreign policy studies at the Cato Institute and the author of “China, America, and the Pivot to Asia.”