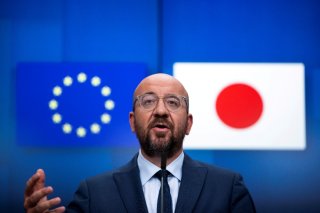 The EU-Japan strategic partnership is based on long-standing cooperation and shared values of democracy, the rule of law, human rights, good governance, and multilateralism. It also covers a broad range of areas from enhanced political, economic, and security cooperation to sustainable development, digital transformation, and climate action. These shared values and issue areas will naturally extend to the Global Gateway. Japan is a choice partner not just because of its economic heft, but also its close cooperation with ASEAN, Australia, the United States, and India; abiding faith in multilateralism; and capacity to balance China despite repeated threats to its territorial integrity. Further, Japan’s FOIP vision will allow the United States and the EU to coordinate their respective interests and find common ground to avoid wasting limited resources through scattered initiatives.

Japan’s post-Covid-19 economy has experienced a slowdown under Kishida, who, despite facing criticism for his “new capitalism” approach that includes distributing wealth based on “a virtuous circle of growth,” has already announced the “largest-ever budget” for fiscal year 2022. Brussel’s Global Gateway can thus be a pathway for Japan to reinvigorate its economic growth, even as traditional partnerships with the EU and India, for example, will be tested. Kishida already expressed his appreciation for Global Gateway in a conversation with European Commission president Ursula von der Leyen in December 2021. By integrating Japan via EPQI into the Global Gateway framework, the EU can build a defining democratic and quality-based infrastructure partnership for the Indo-Pacific region.

Dr. Jagannath Panda is a Research Fellow and Centre Coordinator for East Asia at the Manohar Parrikar Institute for Defence Studies and Analyses, New Delhi. Dr. Panda is the Series Editor for “Routledge Studies on Think Asia.”

This piece is the third part of a four-part series on EU’s Global Gateway Strategy factoring the Asian powers/bloc, primarily China, India, Japan, and ASEAN respectively. The first and second parts of this series can be read here.