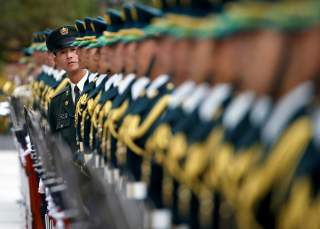 Sino-Japanese relations have long been marred by a maritime and territorial row in the East China Sea as well as a historical dispute over Japan's wartime memory, which has prevented sustainable rapprochement. Further complicating the situation, bilateral ties are now increasingly strained by Japan’s growing presence in the South China Sea, where overlapping territorial and maritime disputes have pitted China against several Southeast Asian neighbours.

At the recent Shangri-La Dialogue, Asia’s most important defense and security summit, Japanese defense minister Tomomi Inada delivered pointed criticisms of China, deploring its attempts to “upend the rules-based order” and “alter the status quo based on assertions incompatible with existing international norms.” While never directly referring to China, Inada’s remarks were some of the most vivid official expressions in recent years of Japan’s concerns regarding China’s foreign policy. The following day, Beijing issued a rebuttal, expressing its “strong dissatisfaction and firm opposition” to what it deemed “irresponsible remarks.”

The JS Izumo, the Japanese Maritime Self-Defense Force’s largest warship, is currently sailing through the South China Sea for three months, making port calls to Singapore, Indonesia, the Philippines and Sri Lanka. The cross-ocean trek comes just as the warship is preparing to take part in a multilateral naval exercise in the Indian Ocean in July, along with India and the United States. The Izumo’s itinerary is meant to serve as a sign of Japan’s commitment to its Southeast Asian partners and is a clear response to what it perceives as China’s overbearing approach to the South China Sea. Notably, the trip also comes on the heels of Tokyo’s November 2016 announcement of the so-called Vientiane Vision, which lays out Japan’s plans for increased defense cooperation with members of the Association of Southeast Asian Nations (ASEAN).

Despite not being a claimant in the South China Sea disputes, Japan is thus poised to become a major player in the body of water, which is likely to heighten tensions with Beijing. With already frayed ties due to the East China Sea’s Senkaku Islands dispute, which shows no sign of subsiding, one may wonder why Japan would risk escalation by increasing its visibility in an area that Beijing sees as vital to its national security.

While the sustained presence of military assets is a relatively new phenomenon, Japan has long been concerned with maritime safety and the security of sea lines of communication in the South China Sea, through which 90 percent of its oil imports transit. As a major maritime trading nation, Japan has seen maritime transport as critically important for national security, and successive Japanese governments since the 1960s have invested heavily in securing sea lines of communication. Japan has founded or given impetus to organizations or agreements whose aims were to enhance maritime safety, such as the Malacca Strait Council in 1968 and the Regional Cooperation Agreement on Combatting Piracy and Armed Robbery against Ships in Asia (ReCAAP) in 2001. Japan has also consistently brought up maritime security in multilateral settings such as the ASEAN Regional Forum, the East Asian Summit and the ASEAN Defense Ministers Meeting Plus.

However, more recently, the main driver of Japan’s involvement in the South China Sea has been the territorial disputes with China and the latter’s growing assertiveness in the maritime domain. Tokyo sees strong normative parallels between Beijing’s approaches to the South and East China Seas, leading to worries that Chinese gains in one area could embolden it in the other. In 2013, former Japanese defense minister Itsunori Onodera explicitly made the connection between the two locales, stating that “the Japan side (was) very concerned that this kind of situation in the South China Sea could affect the situation in the East China Sea.” Since that point, the Abe administration has consistently prioritized the South China Sea issue and has spent significant investment and political capital in strengthening its commitment to the other littoral states in ASEAN.

Since 2012, when the East China Sea dispute flared up following an incident involving a Chinese fishing trawler and Japanese coast guard vessels, the number of Chinese patrols around the Senkaku Islands has dramatically increased. Through sustained patrols, with creative mixes of commercial, fishing and government vessels, and incremental steps aimed at normalizing its presence, China is employing similar gray-zone tactics as those used in the South China Sea. Japan’s outlook has changed significantly in light of these perceived parallels, and as a result the Japanese government believes that undermining China’s approach to the South China Sea will lead to more favorable outcomes in the East China Sea.

While the presence of military hardware—currently illustrated by the JS Izumo voyage—is the most conspicuous element of Japan’s South China Sea strategy, Tokyo’s approach focuses heavily on capacity-building and defense cooperation with Southeast Asian claimants. Since the election of Japanese prime minister Shinzo Abe in 2012, the government has most notably deepened defense ties with Vietnam and the Philippines, two of the major South China Sea claimants. In addition to providing military training and conducting joint exercises, Japan has been transferring equipment—such as patrol vessels and maritime surveillance aircraft—to both countries.

Despite these clear imperatives for a deeper involvement in the South China Sea, Tokyo remains cautious on the scope of its engagement in the disputed waters. For example, while Inada expressed her support for U.S. freedom of navigation operations (FONOPS) in the South China Sea during her speech at the Shangri-La Dialogue, she also refrained from commenting directly on Tokyo’s position with regard to potentially joining such operations with its U.S. ally in the future. Instead, Japan’s defense policymakers carefully craft their message to tailor their engagement to support states in the region—and principles such as freedom of navigation and respect for international law—as much as possible without actually deepening their defense engagement to an extent that might impact Tokyo’s own national interests.

One of the main reasons for why Japan is reluctant to sign on for FONOPS (for example) in the South China Sea is due to a capacity issue. Currently, Japan’s Maritime Self-Defense Force (JMSDF) is stretched thin with its active deployments both in the Sea of Japan and in Okinawa, among other places. Tokyo permanently has at least two JMSDF Aegis-equipped destroyers positioned in the Sea of Japan in order to deter and potentially defend the country against the growing ballistic missile threat from North Korea. Moreover, the JMSDF is stretched thin with its active role in deterrence and also in its role of intelligence, surveillance and reconnaissance in the East China Sea. Nevertheless, despite these constraints, the Japanese government is intent on ensuring the JMSDF’s regular presence in the South China Sea, as the Izumo’s deployment illustrates.

But while the capacity argument is sometimes touted by officials in Tokyo, the real concern about upping the stakes in the South China Sea, either through engaging in FONOPS or more measures, is that Japan knows that any acceleration of its moves in the South China Sea will almost surely be reciprocated by Beijing’s tightening of the screws in the East China Sea. While the situation in the East China Sea also remains unstable, Japan is working—both domestically and alongside its treaty ally in Washington, DC—to manage the risks of escalation and Chinese encroachment. There is no question that these risks would increase exponentially if Japan were to engage in FONOPS in the South China Sea.

This is not to underplay the significance of the Izumo deployment or the considerable efforts Japan has contributed to the region in recent years to shore up the capacity of littoral states in ASEAN. It is important, however, to keep in mind that Tokyo has to delicately calibrate its approach in the region to ensure a proper balance of its regional security interests alongside its national-security imperatives.

Benoit Hardy-Chartrand is a Senior Research Associate with the Centre for International Governance Innovation. J. Berkshire Miller is an international affairs fellow with the Council on Foreign Relations based in Tokyo.