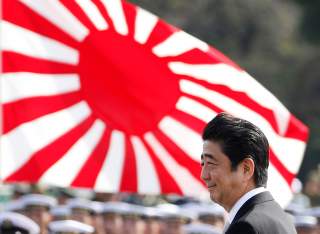 Fresh off a major election victory, many observers expect Japanese prime minister Shinzo Abe and the Liberal Democratic Party to renew efforts to modify the seemingly pacifist Article 9 of the Constitution of Japan, something they were previously unable to accomplish. Yet an amendment may not be as important as previously thought, since the actions of the People’s Republic of China and the Democratic People’s Republic of Korea (DPRK) helped Abe relax military restrictions in recent years, and arguably aided his re-election. Even without changing Article 9, Abe’s efforts resulted in a modern Japanese military capable of projecting power, supporting the foreign policies of Japan and its allies, and ensuring regional stability. Since the U.S. military faces a smaller than desired force, the newly assertive Japanese military presents a unique opportunity for both nations.

The History of Article 9

Aspiring sincerely to an international peace based on justice and order, the Japanese people forever renounce war as a sovereign right of the nation and the threat or use of force as means of settling international disputes.

In order to accomplish the aim of the preceding paragraph, land, sea, and air forces, as well as other war potential, will never be maintained. The right of belligerency of the state will not be recognized.

Written in the wake of the Japanese Empire’s defeat in World War II, it was designed to prevent future imperial conquests. However, Hitoshi Ashida, the chair of the Constitutional Amendment Committee, admitted that he specifically crafted the final wording to allow for rearmament for self-defense. In 1950, Japan reinterpreted Article 9 and decided it did not prohibit the creation of a seventy-five thousand person “National Police Force.” One year later a second reinterpretation allowed that police force to become a Peace Preservation Force. In 1954 the third reinterpretation resulted in the official creation of the Self Defense Forces (SDF), whose standing land, sea and air components might otherwise violate the exact wording of Article 9. Abe directed the fourth reinterpretation in 2014, which resulted in the concept of limited collective self-defense. Observers of Japan’s defense growth tend to miss this point and do not look beyond the title to see that Japan’s Self Defense Forces is one of the most capable militaries in the world.

Reinterpretations are driven by concerns for Japan’s regional security and accelerated Japan’s military buildup in the last decade. The military actions of Japan’s neighbors also fueled the SDF’s rise. Japan’s 2005 National Defense Program Outline highlighted China as a potential threat for the first time since 1976. By 2016, SDF aircraft scrambles had risen almost 300 percent in four years, and 73 percent of the 2016 scrambles (851 of 1168) came in response to China’s fighter, bomber and surveillance activities. The type of Chinese operations changed as well, with 2016 seeing the first observed case of Chinese fighters conducting long-range missions into the Pacific Ocean. Japan’s 2013 National Security Strategy included concerns over both China’s actions and DPRK’s actions, specifically stating that DPRK missile and nuclear weapons developments pose a threat to Japanese security.

Modifications to the SDF budget indicate how Japan responded to DPRK and Chinese actions. The SDF’s top priority in the 2011 budget was “Effective Deterrence and Response,” with the top three deterrence priorities being “Information Gathering, Patrolling and Surveillance Actions,” “Response to Various Situations in the Offshore Islands,” and “Response to Cyber Attacks.” In 2012 the top deterrence priorities changed to “Ensuring security of adjacent seas and airspace,” “Response to attacks on offshore islands,” and “Response to cyber attacks.” By 2017 the top three priorities had changed again to ensure a “security of seas and airspace surrounding Japan,” focus on providing the country with the ability to respond “to attacks on remote islands” as well as ballistic-missile attacks. The SDF budget also increased each year after 2012. Thanks to these changes the United States now has a close regional ally who maintains a large, modern and increasingly capable military force. Japan’s government also has international interests mirror those of the United States. Those interests include the pursuit of “an international environment that offers stability, transparency and predictability.”

Partnering with such an ally can prove beneficial to a U.S. military that wants to promote U.S. policy in the region but faces force structure limitations. As Derek Reveron argues in Exporting Security, “fiscal constraints in the United States will also generate demand for allies and partners to lead more.” The U.S. Navy is one example of a military branch that is smaller than desired and unlikely to rapidly expand, yet faces ever increasing commitments, especially in the Asia-Pacific region. A solution for the navy could be to increase combined operations with the Japanese Maritime Self Defense Force (JMSDF) to meet force-projection requirements without a need to increase fleet size, especially when the national interests of both countries align (as they seem to when facing the China and the DPRK). This means the navy could benefit from the JMSDF’s fleet of 115 ships, including modern Aegis-equipped destroyers, mine-sweepers and submarines (with more of each type on order).

Combined operations would increase both power projection and overall regional deterrence as well. Not only does combining forces present a larger, more formidable presence, but it also raises the stakes for the DPRK and China. For example, the JMSDF’s newest fleet additions include the helicopter destroyers Izumo and Kaga, which are similar to Wasp-class Amphibious Assault Ships that carry U.S. Marine Corps (USMC) AV-8Bs and F-35Bs. While Japan is not currently purchasing F-35Bs, either ship could conceivably support F-35B operations. Deploying USMC F-35Bs on these ships would provide the Marines with another forward deployment option while still allowing the SDF to maintain a defensive posture in accordance with Article 9 (as Japan could argue they are only carrying and defending an ally’s aircraft). From a deterrence perspective, this combination means any Chinese or DPRK attack risks immediately provoking a response from both countries. Attacking the JMSDF ship might result in a loss of USMC property and/or personnel, while attacking the F-35s might result in a JMSDF response as the ship’s personnel defend the USMC aircraft. Other deterrence scenarios include increasing JMSDF escort of U.S. aircraft carriers (especially with a U.S. carrier based in Japan), or having JMSDF ships join USN ships during Freedom of Navigation Operations. In all cases deterrence increases not only with the size of the force, but also with the fact that any DPRK or China provocation risks immediately triggering a response from two powerful militaries.

The Complications of a More Assertive Japanese Military

There are still two main issues that Abe must address if he continues to modernize the SDF and take a more aggressive military stance. The first issue is maintaining the support of a Japanese population that protested past amendments and security resolutions. Critics of Abe’s policies point to the protests in 2014 and 2017 (following the announcements of the reinterpretation and the plan to amend the constitution, respectively) as an indication that the Japanese public does not support a more aggressive military stance. Yet the continued actions of the Chinese and the DPRK seem to have reduced the public’s opposition in recent years. The number of protestors decreased from 2014 to 2017, and surveys indicate the number of Japanese supporting a constitutional change is higher than those opposing it, with 93 percent of one survey’s respondents stating they viewed the DPRK as a significant threat. Abe’s recent election victory may also be an indication that the Japanese population is more receptive to his more aggressive policies, despite historical reservations.

The second issue involves the impact on other regional actors if Japan increases its military operations. Japanese-South Korean relations are an area of possible tension, especially since South Korea continues to protest Japanese conduct before and during World War II and remains wary of any Japanese militarization. Once again DPRK actions may be enough to force these issues aside, as indicated by Abe’s 2015 official apology for the use of comfort women, the two countries resuming annual reciprocal visits, and their recent bilateral push for increased DPRK sanctions and trilateral cooperation with the United States. South Korea’s attempt to partner in the U.S. Terminal High Altitude Area Defense system in spite of China’s objections may provide even more common ground, as Japan is already a system partner. While tensions may still exist between Japan and South Korea, the shared DPRK and Chinese threat seems to be pushing them aside.

As a result of Abe’s efforts to expand and modernize the SDF, his push to reinterpret Article 9, and his party’s dominance in the recent election, Japan and the United States have an opportunity to increase stability and deterrence in the Asia-Pacific region through combined military operations. This combined force would be larger in numbers and present a greater deterrent to Chinese and DPRK actions than either country could accomplish on its own. The lack of a constitutional amendment should not prohibit the two militaries from working together when interests align, as they currently do when facing China and the DPRK. The disciplined use of this combined force should help maintain the desired regional status quo while promoting and maintaining, as stated by the Japanese National Security Strategy, “an international environment that offers stability, transparency and predictability.”