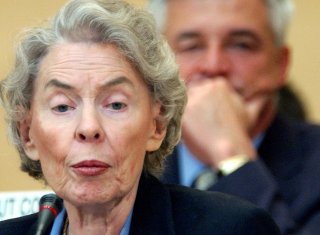 Thirty years ago and as the Cold War was ending, the National Interest solicited essays from leading conservative thinkers for a symposium on “America’s Purpose Now.” The National Interest editors asked: “If the Cold War has ended . . . and the global containment of communism is no longer an urgent task, what central purpose—if any—should inform America’s foreign policy for the rest of this century and beyond?”

The most remarkable essay authored for the symposium was by President Ronald Reagan’s former UN ambassador Jeane Kirkpatrick, titled “A Normal Country in a Normal Time.” The essay is remarkable in a number of respects, but most of all for presaging the general outlines of Donald Trump’s populist foreign policy and also for the degree to which Kirkpatrick’s advice has been roundly ignored by the U.S. foreign policy establishment. The American Enterprise Institute, with which Kirkpatrick was affiliated at the time of her essay, promptly adopted a post–Cold War foreign policy outlook that defied every one of her central recommendations.

Kirkpatrick’s essay begins by insisting that, because of world events since 1939, America has given to foreign affairs “an unnatural focus.” Now in 1990, she says, the nation can turn its attention to domestic concerns that are more important because “a good society is defined not by its foreign policy but its internal qualities . . . by the relations among its citizens, the kind of character nurtured, and the quality of life lived.” She says unabashedly that “there is no mystical American ‘mission’ or purposes to be ‘found’ independently of the U.S. Constitution and government.”

One cannot fail to notice that this perspective is precisely the opposite of George W. Bush’s in his second inauguration. According to Bush, America’s post–Cold War purpose was to follow our “deepest beliefs” by acting to “support the growth of democratic movements and institutions in every nation and culture.” For three decades neoconservative foreign policy has revolved around “mystical” beliefs about America’s mission in the world that are unmoored from the actual Constitution.

In Trumpian fashion, Kirkpatrick then goes on to warn Americans about the danger of an unaccountable “deep state” in foreign policy that is immune to popular pressures. She rejects emphatically the views of some elitists who argue that foreign policy is a uniquely esoteric and specialized discipline and must be cushioned from populism. She says that, no, “it has become more important than ever that the experts who conduct foreign policy on our behalf be subject to the direction of and control of the people.”

She points out that because America had for much of the twentieth century assumed global responsibilities, our foreign policy elites had developed “distinctive views” that are different from those of the electorate. Again, in Trumpian fashion, she argued that foreign policy elites “grew accustomed to thinking of the United States as having boundless resources and purposes . . . which transcended the preferences of voters and apparent American interests . . . and eventually developed a globalist attitude.”

In support of Kirkpatrick’s concern, Tufts professor Michael Glennon has more recently argued that the national security establishment has now become so “distinctive” in their separation from our constitutional processes that they represent one wing of a now “double government” that is not unaccountable to, and unsupervised by, the popular branches of government. The Russiagate investigations and the attempt to disable the Trump presidency, aided by many in the establishment, would appear to confirm Kirkpatrick’s warning that foreign policy elites want no part of the electoral preferences of voting Americans.

Kirkpatrick concludes her essay with thoughts on “What should we do?” and “What we should not do.” Remarkably, her first recommendation is to negotiate better trade deals. These deals should give the U.S. “fair access” to foreign markets while offering “foreign businesses no better than fair access to U.S. markets.” Next, she considered the promotion of democracy around the world and, on this subject, she took the John Quincy Adams position: that “Wherever the standard of freedom and Independence has been or shall be unfurled, there will her heart, her benedictions and her prayers be.” However, she insisted: “it is not within the United States’ power to democratize the world.”

When Kirkpatrick goes on to discuss America’s post–Cold War alliances, she makes clear that she is advocating, quite simply, an America First foreign policy. Regarding the future of the NATO alliance, a sacrosanct pillar of the American foreign policy establishment, she argued that “the United States should not try to manage the balance of power in Europe.” Likewise, we should be humble about what we can accomplish in Eastern Europe and the former Soviet Union: “Any notion that the United States can manage the changes in that huge, multinational, developing society is grandiose.” Finally, with regard to Asia: “Our concern with Japan should above all be with its trading practices vis-à-vis the United States. We should not spend money protecting an affluent Japan, though a continuing alliance is entirely appropriate.”

She famously concludes her essay by making the plea for the United States to become “a normal country in a normal time” and “to give up the dubious benefits of superpower status and become again an unusually successful, open American republic.”

Kirkpatrick became Ronald Reagan’s United Nations ambassador because her 1979 article in Commentary, “Dictatorships and Double Standards,” caught the eye of the future president. In that article, she sensibly points out that authoritarian governments that are allies of the United States should not be kicked to the curb because they are not free and open democracies. The path to democracy is a long and perilous one, and nations without republican traditions cannot be expected to make the transition overnight. Regarding the world’s oldest democracy, she remarked: “In Britain, the road from the Magna Carta to the Act of Settlement, to the great Reform Bills of 1832, 1867, and 1885, took seven centuries to traverse.”

While at the time neoconservatives opportunistically embraced her for this position as a tactic to fight the Cold War, the current foreign policy establishment would consider Kirkpatrick’s argument to be beyond the bounds of decent conversation, as it would lend itself to an accommodation with authoritarian Russia as a counterweight to totalitarian China.

Kirkpatrick died in 2006 and had, like many neoconservatives, evolved from a Humphrey Democrat into a member of the GOP establishment. With William Bennett and Jack Kemp, in 1993 she cofounded a neoconservative group, Empower America, which took a very aggressive stance against militant Islam after the 9/11 attacks. However, she was quite ambivalent about the invasion of Iraq and was quoted in The Economist as saying that George W. Bush was “a bit too interventionist for my taste” and that Bush’s brand of moral imperialism is not “taken seriously anywhere outside a few places in Washington, DC.”

The fact that Kirkpatrick’s recommendations in her 1990 essay coincide with some of Donald Trump’s positions in the 2016 campaign (if not with many of his actual actions as president) make her views, ipso facto, not serious. The foreign policy establishment gives something like pariah status to arguments that we should negotiate better trade deals, reconsider our Cold War alliances and, most especially, subject American foreign policy to popular preferences. If she were alive today and were making the arguments she made in 1990, then she would be an outcast. That a formidable intellectual like Kirkpatrick would be dismissed in such a fashion is a sign of how obtuse our foreign policy debate has become.

William S. Smith is Senior Research Fellow and Managing Director of the Center for the Study of Statesmanship at The Catholic University of America. His recent book, Democracy and Imperialism, is from the University of Michigan Press. He studied political philosophy under Professor Jeane Kirkpatrick as an undergraduate at Georgetown University.