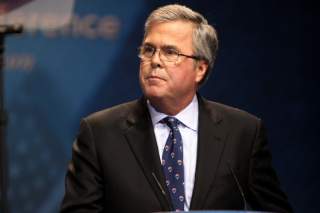 That was my snap assessment of Jeb Bush's big foreign-policy speech in Chicago Wednesday. It may have simultaneously been too glib and too generous.

But first the obvious: the former Florida governor didn't want the comparison to be made at all. The major takeaway lines from his speech emphasized that he was different from previous Presidents Bush.

"I love my father and my brother," Bush said. "I admire their service to the nation and the difficult decisions they had to make. But I am my own man—and my views are shaped by my own thinking and own experiences."

"I am my own man." No doubt, the headline of most news stories written about Bush's speech.

In truth, his father and brother have given him a bit of plausible deniability about his own views. Is he a cautious and prudent internationalist like his father or an assertive and ideological unilateralist like his brother? (Wags could be forgiven for joking that a war in Iraq must be a given either way.)

Jeb's speech paid some homages to the Bush 41 approach. There were no fires in the minds of men. He didn't seem big into democracy promotion. It was very business-like.

But by and large, Bush's speech was filled with interventionist cliches. "America does not have the luxury of withdrawing from the world," he said. "Our security, our prosperity and our values demand that we remain engaged and involved in often distant places. We have no reason to apologize for our leadership and our interest in serving the cause of global security, global peace and human freedom."

Are our only options Iraq-style preventive wars or "withdrawing from the world"? This would be news not just to libertarians like Rand Paul or Justin Amash, but also Ronald Reagan, who remained pretty "engaged and involved" without such wars.

"For the life of me, I don’t understand" opposition to the "hugely important" NSA program, Bush said.

The governor again did not elaborate on what this actually means. But he knows he's not sure President Obama is on the same page.

"I have doubts whether this administration believes American power is such a force," Bush said. "Under this administration, we are inconsistent and indecisive. We have lost the trust and the confidence of our friends. We definitely no longer inspire fear in our enemies."

This is a very easy criticism to make, and it's not entirely wrong. But let's point out something specific from the Obama administration's record.

President Obama used American power in Libya. Not necessarily consistently or decisively, much less legally, if you are one of those sticklers for Congress' constitutional war powers. But he used it and effected regime change in the country.

Now Italians are worrying about an ISIS invasion from Libya. Was that a "benefit to the world"?

Jeb concedes, in Washington "mistakes-were-made" fashion, that all didn't go well in Iraq. ("There were mistakes made in Iraq" was his exact phraseology in the question-and-answer session.) But that the surge was one of “the most heroic acts of courage politically that any president’s done" and "hugely successful."

At this point, it looks like Jeb Bush is aiming for his brother's second-term foreign policy: a bit more restrained and less ideological than the first, despite the over-the-top 2005 inaugural address, but you still get a surge in Iraq.

But wasn't the surge supposed to create space for political reconciliation among Iraqis? Is it possible that it only succeeded in the sense that it enabled us to extricate ourselves from Iraq without having been defeated? And how successful was it if its gains could collapse so quickly after the troops left?

More importantly, what role did this projection of American power play in creating the vacuum later filled by ISIS, which might exceed pre-invasion Saddam Hussein as a national-security threat?

There were no answers to these questions that defy the easy "engage and lead" or "withdraw and retreat" choices; "peace through strength" versus "weakness."

Finally, I might have been too kind in my initial praise of Bush's pronunciation. There were notable flubs in pronunciation and fact in his presentation.

Let's not be too petty. Most of this was rust—Bush hasn't run for office since 2002.

But it isn't totally insignificant if Bush is supposed to be the foreign-policy adult who is going to lead us to safety on the strength of his "liberty diplomacy" and engagement.