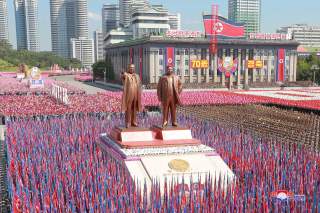 There were no major surprises in North Korea’s September 9 military parade.

Although North Korea has not yet broadcast the parade, images taken by journalists in Pyongyang show that the parade line-up was identical to the lineup seen in a satellite image taken on August 22. Contrary to some earlier prognostications, the parade on Sunday was smaller than the one in February, smaller than past parades, and did not include any nuclear-armed systems.

While there were some interesting developments among conventional systems, the only missile systems were decidedly defensive: the Kumsong-3 coastal defense cruise missile and the KN-06 surface-to-air missile. And most important these are not nuclear-armed systems.

The president immediately took to Twitter to celebrate the lack of ICBMs, citing it as a sign of North Korea’s commitment to “denuclearization”—a term that the president and his national-security team often mistakenly use as a synonym for “disarmament.” In fact, that word means something different. The only thing North Korea denuclearized on Sunday, my friend Josh Pollack noted wryly, was Kim Il-sung Square.

Still, the decision to hold out nuclear-armed ICBMs was a decision. And that decision deserves some thought.

One explanation was that the lack of ICBMs may well have been China’s price for sending Li Zhanshu, a member of China’s Politburo. While President Donald Trump has attacked China for interfering in his diplomacy—a claim that no serious analyst I know finds credible—Beijing may well have asked North Korea to tone down the parade.

But it seems likely that Kim Jong-un paid that cost willingly, given that he also sent a letter to Donald Trump. Kim has figured out that, having completed North Korea’s nuclear deterrent, he can have his cake and eat it, too.

By denuclearization, Kim Jong-un doesn’t mean giving up his nuclear weapons. Instead, he means a process by which nuclear weapons recede into the background. He’s willing forego nuclear testing and certain missile tests. He’s also willing to stop showing off his nuclear-armed missiles in his parades. And in exchange, he’s expecting the United States and its allies in Asia to stop complaining about it. In other words, he stops brandishing the bomb, and we pretend the problem is solved. He is asking the United States to accept North Korea’s nuclear status on the same terms that it does with Israel.

But this does not mean that Kim is offering to give up those weapons. From his perspective, the entire engagement with the United States was made possible by his ability to finish what his father started—the development of a thermonuclear weapon and an ICBM that can deliver it all the way to the United States. Kim did not speak at the parade, but Kim Yong-nam did. And while Kim Yong-nam said little, he made his point the day before in a congratulatory message sent to Kim Jong-un that was printed on front page of Rodong Sinmun, stating that North Korea’s “mighty sword”—a reference to its nuclear arsenal—“will provide peace forever and ensure that our descendants won’t suffer hardships like the Arduous March or undergo another war experience.” Of course, the English translation provided by Roding Sinmun seems to omit the reference to nuclear weapons. After all, why rub our noses in it?

The question of course is whether this is a good deal. Should we just pretend that North Korea’s nuclear weapons don’t exist? Trump has a point when he says it’s better than no deal, better than the “fire and fury” of 2017—although he neglects to add that it was his threats more than North Korea’s nuclear weapons that unsettled people. Perhaps President Trump will simply declare the problem solved, as he did shortly after the Singapore Summit. Perhaps we can trust North Korea to avoid drawing attention to the new nuclear-armed missiles that it is now mass producing. And perhaps we can count on other world leaders to play along. But I have my doubts about whether this state of affairs is truly sustainable. What happens when Moon Jae-in is no longer president of South Korea? Or when Trump is no longer president of the United States? Or, heck, what happens if Trump just changes his mind? Then things could get very tense.

And when they do, those nuclear-armed ICBMs will still be around. We did not see any in Kim Il-sung Square on Sunday, but that simply means they were elsewhere—parked in garages and tunnels, waiting quietly under the hum of fluorescent lights for the day they are called to action, not for a parade but to be loaded with nuclear weapons and sent into the sky.

Dr. Jeffrey Lewis is the director of the East Asia Nonproliferation Program at the James Martin Center for Nonproliferation Studies at the Middlebury Institute of International Studies at Monterey and the founding publisher of Arms Control Wonk.com. His also a nonresident affiliate at Stanford’s Center for Security and International Cooperation and a contributing editor to Survival.