The Jersey City Tragedy Puts a Spotlight on America's Tribalism 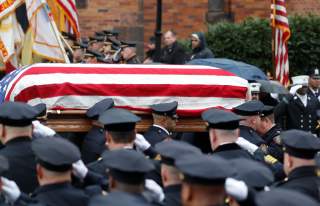 The human tragedy of the Jersey City shooting is numbing: innocent lives were taken, families torn apart, and communities paralyzed by catastrophe and fear. While the tragedy is self-evident and well covered, tribalism, the underlying cause of the Jersey City tragedy and the thousands of other hate crimes that are now accepted as part and parcel of contemporary life, is less understood.

Tribalism is not a new phenomenon. The cultural division of people into families, sects, religions, political parties and even sports teams is rooted in our DNA. In fact, anthropologists, evolutionary biologists, and political scientists trace the earliest record of tribalism to, well, tribes. Specifically, the hunter and gatherer tribes of the Anthropocene era who left the first archeological records of humans banding together to create, what Robert Wright famously termed, “non-zero sumness,” cooperation that yields the experience of win/win interactions.

Tribalism, simply defined, is the grouping of individuals into specific cliques that are at times elastic and at others rigid. A political party or a football fan club are examples of the elastic type in that one can gain admittance into the group with relative ease. Examples of rigid tribalism are human constructs such as aristocratic families, religions, and nation-states in which admittance is either impossible or imposes a high barrier to entry.

Today, tribalism has developed a negative connotation. It is associated with political partisanship, troubling nationalism, and religious fundamentalism. In the last few years, there have been a plethora of books that lament the contemporary resurfacing of extreme tribalism. A few of them posit that tribalism has diminished over the last few hundred years and point to various economic and social metrics to prove their respective assertion; other books, such as those written by Francis Fukuyama and Jonah Goldberg, shed light on the dark underbelly of tribalism and its threat to progress, freedom and human rights.

If tribalism is so dangerous then why does nature select for it? What are the reproductive and survival evolutionary benefits that have enabled it to survive as a hardwired human phenotype? A small tribe in the African savannah was more likely to survive predators as a group/tribe than as individuals left to their own devices. Survival equals reproductive fitness. And as importantly for the flourishing of human civilization, the positive win/win experience of that tribe encourages further cooperation between individuals and groups and over time the benefits of that cooperation accrue exponentially.

Consider the following example: A disparate group of hunter-gatherers team up to throw rocks at a stalking, ferocious predator thereby saving each of the group member’s lives. An individual stands no chance against a hungry lion; however, a group can win emerge victorious from that same confrontation. The surviving tribe has now experienced the non-zero sum nature of cooperation and is more apt to both find new areas of cooperation as well as new methods and platforms for that cooperation (language, culture, family, agriculture, etc.). Altruism, empathy, and fraternity have all emerged into the human suite of behaviors because of this tribal experience. The risk, however, is that as the tribe grows and builds a stronger common identity it may also become more exclusionary and distrusting of strangers.

An additional strength of tribalism relates to the human need for dignity and purpose. Utopian aspirations of universal brotherhoods make sense on paper but have historically descended into the dystopian because the only way to control the human craving for free, individualized expression is to create autocratic, stifling centralized controls. Healthy tribalism enables individuals to group together with like-minded people and form communities within communities. Dignity and expression are reinforced by the group’s esprit de corps and its ability to value each individual despite their differences.

Yet, despite the positive evolutionary phenotypes of tribalism; there is another side of the tribal double-edged sword that is disastrous. A comparison between the respective brands of American and European nationalism reflect tribalism’s dualism—a pernicious brand of European nationalism that inspired world wars and exacted countless human suffering.

The American brand of “nationalism” has always been of the elastic type. It proudly proclaims its parochial eccentricities but is built on a firm foundation that embraces human differences. Diversity is not seen as a threat but as a strength, and American nationalism has evolved into what Richard Dawkins coined a “cultural meme,” which over generations of American history has proven its evolutionary fitness. Americans have a tribe, but the Founders saw its tribe as ever-expanding and undergirded by a universal morality.

There is a reason why immigrants of different ethnic and creedal minorities embrace the distinctly American appellation of “hyphen American.” Americans are Jewish-American, Irish-American, Anglo-American and/or African-American with no hierarchical distinction. America is where the particular meets the universal which yields an inclusive, salving brand of nationalism that we call patriotism.

European nationalism is of a different ilk. Initially riven by religious sectarianism, Europe morphed into nationalistic tribalism after the Peace of Westphalia in 1648. In the 450 years since that treaty, nationalism replaced religion as the European identity of choice. Each European nation lays claim to its own myths, culture, language, historical narrative and bloodlines. The borders, both literally and figuratively between European nations, are impermeable and no amount of reeducation and acculturation can pave the way for full integration of minorities. Despite the best twentieth-century efforts at building a common European identity, culture and monetary system, Europeans still identify as Frenchman, Russians, Spaniards, and Poles. The hyphen is nowhere to be found on a European continent that is comprised of tribes that are distrustful of the other. The pointless tragedy of millions who died on a European battlefield bear witness to this brand of nationalism.

Make no mistake, hate-motivated crimes such as the one that was committed in Jersey City are fueled by tribalism unleashed. It is an ugly evolutionary response to a fear of the other that has yet to be defeated by the beneficent tribal impulse that has resulted in the uniquely human traits of altruism, empathy, compassion and fraternity. Our tribal impulse has made possible both technological and social progress but also war, misery, genocide and civilizational decline. Our families, communities and way of life depend on which tribal impulse we as a civilization choose to embody.

Keith Zakheim is the chief executive officer of the Antenna Group.