Jerusalem and the Follies of Trump's Embrace 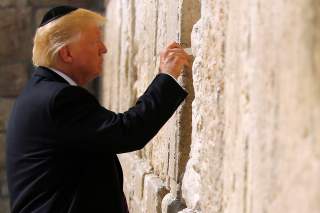 Israelis today are feeling the love from Washington and bracing themselves for trouble. As President Donald Trump announces practical steps towards moving the U.S. Embassy to Israel from Tel Aviv to Jerusalem, he breaks with precedent in overwhelmingly embracing the Israeli government narrative of Jerusalem’s status. Israel’s security establishment is preparing to contain the fallout. Given Palestinian outrage and the Israeli leadership’s predilection for provocation, over reaction, and collective punishment of Palestinians, this could get ugly. As the veteran Israeli commentator Orly Azulai notes in Israel’s leading circulation daily Yediot, “This is not a gift that shows affection for Israel … this is a powder keg being left on our doorstep … we are the ones that will pay the price.” Even if events do not immediately spiral out of control, the president’s announcement will have heightened tensions and sown the seeds for future instability.

That a speech initiated by the White House, not demanded by events, had to include a call for calm itself speaks volumes.

The Jerusalem announcement from Washington needs to be kept in perspective. The proximate cause of insecurity and violations of human rights and international law, the actual problem in other words, is Israel’s policies towards the Palestinians on the ground not the verbal hot air from Washington. But the former is sustained and given protective cover by the latter.

It is not at all clear that this U.S. initiative has been driven by Israel’s rightist government. Prime Minister Benjamin Netanyahu is of course not ideologically opposed to what the president is doing or saying, he will welcome it and declare victory. Trump’s words will also domestically empower Netanyahu at a moment of unprecedented weakness, born of the multiple corruption investigations being conducted against him alongside the heavy handed, legislatively problematic and borderline authoritarian manner of his response. But Trump’s announcement is not risk-free and the celebrations on the Israeli side of Jerusalem may prove to be hollow.

To be clear, Trump is not endangering his allies in Israel to the same degree as he is with the South Koreans. A pattern though may be emerging—this president could pose more of a threat to his allies than his adversaries.

This presidential initiative may well be the product of the hawkish, even extremist pro-Israel sympathies of his closest confidantes. It may also be designed to test how much regional leeway (especially regarding Israel) he can now claim given the extent the White House has deepened ties with certain Arab states, and in particular Saudi Arabia and the United Arab Emirates. In the most farfetched interpretations of this move, it has even been claimed that this lunge towards the Israeli side on Jerusalem can be used to create leverage and be constructively deployed if and when an American peace plan is presented. That is hogwash. If true, it displays a terrifying ignorance of the issues involved, the centrality of Jerusalem and the human dynamics of maintaining confidence and relationships in any mediation and peacemaking effort.

To understand the ‘why’ and the ‘why now’ of this move, one is probably better advised to visit the Breitbart website, which is proudly proclaiming ‘hallelujah’ in a banner homepage headline. Not unusually for American engagement on this issue, this is probably more about the mid-West than the mid-East. Trump’s overall political strategy has been all about keeping the Republican Party and Congress on board by solidifying support within his own domestic political base. This move will play well, very well, with a large swathe of the dispensationalist Evangelical Christian community as well as with the very small cohort of conservative American Jewish support he carries, especially the subset of that cohort known as Sheldon Adelson.

The question many experts have been pondering is how these considerations have trumped the traditional American national security interest argument whereby the price America pays for its indulgence of Israeli occupation practices, and its perpetuation of a grievance felt by Muslims and Arabs regarding Palestine, needs to be managed, not exacerbated. American policy on Israel/Palestine is a gift to radicalisation, and is consistently part of the extremist recruitment narrative from Bin Laden down.

CENTCOM chiefs have frequently and openly testified to how the handling of this issue can undermine American forces and security in the region and beyond. That entire trend is intensified when the focus becomes more narrowly that of Jerusalem.

However, for those arguments to have carried the day, one has to assume that this White House agrees with the premise that U.S. interests are best served by seeking to heal and improve relations with the Muslim world. But if your own political project and the project for America is to polarize, to deepen divisions, and especially to demonize Muslims and perhaps even use that clash to achieve other domestic political transformations then you might have an interest in fomenting trouble, in generating demonstrations where for instance American flags may be burned.

Undoubtedly this is a defeat for the Palestinians in the short term, but more precisely, this is a defeat for what was anyway a failed Palestinian approach, one in desperate need of change. The clarity which the Trump administration is offering the Palestinians with regards to how counterproductive it is to continue pursuing an American-led peace process, to continue neglecting the accumulation of Palestinian leverage, that clarity may end up being more of a cause of concern for Israel.

To understand why this might be the case, it is worth remembering why this conversation is taking place at all right now. The necessity for the U.S. President to address the issue of the embassy and Jerusalem every six months is not a Trump invention. It is a consequence of the Jerusalem Embassy Act passed by Congress in October of 1995 by an overwhelming 93-5 majority in the Senate and 374-37 in the House, calling on the embassy to move to Jerusalem unless the president uses a waiver for national security reasons. The push for that legislation in the early 1990s came not from the Israeli leadership of the time, but from the way this issue plays out in American domestic politics and the biases of the key lobbying groups, notably AIPAC. It was an initiative at the time which cornered and undermined the peace efforts of the then Israeli Prime Minister Yitzhak Rabin (who privately opposed the move).

The circumstances today are different. The current Israeli Prime Minister, Netanyahu, is seeking to close the door on any realistic peace deal and to gain acceptance and cover for the permanent disenfranchisement and bantustanization of the Palestinians.

Still, the story of the Jerusalem Embassy Act is instructive. It speaks to the American inability to be an effective, let alone honest, broker on this issue, as being a permanent structural feature rather than an ephemeral Trumpian blip.

Trump suggested that his move was a departure from the failed policies of the past, in reality he is putting that same policy on steroids, a policy of putting America’s thumb down on the scales in favour of the stronger party, Israel.

Trump’s moves are further cornering the Palestinian leadership and generating a demand among the public for a game-changing shift in strategy away from the current comfort zone of an American-Israeli defined peace process. That includes the need to sufficiently overcome debilitating internal Palestinian divisions.

Trump is doing the Palestinians a favour by making the centrepiece of this Jerusalem—the issue which resonates most broadly in Arab communities, and also amongst Muslims and Christians (as well as with Jews of course), and the issue around which people are more likely to be mobilized. The new Saudi leadership, given its particular closeness to the Trump administration and given its custodianship of the two holy mosques, is especially exposed and vulnerable should it appear to be complicit in selling out al-Aqsa and al-Quds. Trump’s mention in his speech of the Summit in Riyadh earlier this year will fuel speculation of Saudi culpability.

Over the summer when Israel tried to unilaterally change arrangements at the al-Aqsa mosque compound, there was perhaps an unprecedented large-scale mobilization of Palestinian Jerusalemites, Palestinian citizens of Israel and West Bankers which, with Jordanian and international support, ultimately led to an Israeli capitulation.

That was a timely reminder that Palestinians do have agency, that mobilization on the local and regional level matters, and that what is said in the Briefing Room in Washington ultimately counts for less than what is done on the ground in the Holy Land.

Daniel Levy is the president of the U.S./Middle East Project, based in New York and London, and is a former Israeli negotiator.