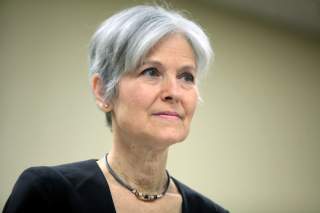 Since 2000, when Ralph Nader was its presidential candidate, few things have been heard about the Green Party. While initially the party promoted itself as beyond left and right, now the party, like its European counterparts, is more or less a left-wing party, or what in America is called progressive. Jill Stein is now their nominee, and while she also ran in 2012, it seems that only since this campaign has she received name recognition and media attention.

Stein has an incredible curriculum vitae, having majored in anthropology, sociology and psychology at Harvard University, then graduated as a doctor from Harvard Medical School, working in private practice for many years. She got into politics in 2000 with Ralph Nader’s campaign. In 2002 she ran as the Green Party gubernatorial candidate in Massachusetts, even making it to the debate against Mitt Romney. In 2011 she was recruited to run for president as the candidate of the Green Party.

In 2012 Jill Stein faced a unsuspected challenge—comedian Roseanne Barr, a relatively famous person—but she managed to defeat her in the primaries, and in the general election, while falling behind the Libertarians, they managed to beat another progressive challenger, former Salt Lake City mayor Rocky Anderson, who ran for the newly formed Justice Party. She ran a more or less average progressive campaign: free college education, universal health care, environmentalism, public jobs programs and an antiwar foreign policy. She called her plan the Green New Deal.

In 2016, she’s basically running on the same platform, but with some issues more explicit, like abolishing the student debt by quantitative easing and even reparations for slavery. However, this campaign is very different from 2012 not only because the Sanders campaign raised a lot of the same issue, but because Jill Stein has become a more experienced candidate. In interviews and rallies, it seems that she’s become able to craft her message more articulately than four years ago. She has also become politically savvy, trying to appeal to disenfranchised Sanders voters who, especially after the leaks, feel that the DNC has betrayed them. She even went to the Democratic convention trying to directly reach some Sanders supporters. The surprise of the so-called “Demexit” even included people raising Jill Stein banners inside the DNC.

The Green New Deal sounds more like a progressive wish list than a true political program, though to be honest Sanders’s proposals weren’t so different. Stein’s promises on environmental issues sound like a dream, since 100 percent clean energy by 2030 seems unreachable. But there are some issues that we should recognize in the Greens’ platform. They are pushing for IRV (instant-runoff voting), which would eliminate the fear of spoiling an election. While Gary Johnson picked the Iraq War supporter Bill Weld, Stein picked antiwar activist Ajamu Baraka. She has the most antiwar platform of this season, calling for a 50 percent cut to the military budget—a topic that had been omitted by Sanders, who was not as antiwar as his supporters. But one point that catches the attention is that, in the 2012 election, she attempted a Eugene Debs move, trying to enter a major-party debate and consequently being jailed. That shows more courage than your average politician.

Liberals are attacking her, saying she’ll be a spoiler and help to elect Trump. Others misunderstood a comment about vaccines and now think she’s an antivaxxer, although she isn’t. It’s funny how the liberals who dismissed Sanders and his supporters as sexists now are viciously attacking a truly progressive woman.

It is hard to tell if the Green Party will be able to get the 5 percent support that would secure ballot access in several states and give them millions in public funding, but maybe their message can still be heard. The fear of a 2000 result is still on the air; Ralph Nader went from being a liberal icon to being hated from a large chunk of the Democratic Party. Since the 1990s, the Democratic Party has moved rightward, with Bill Clinton abandoning New Deal economics and becoming much more centrist. But the Nader campaign showed that there was hunger for a truly progressive candidate. Probably a Gore victory would had mean that Obama would never had been president. Obama, like Nader, promised change, and now Sanders is even calling for a revolution. Win or lose, perhaps by merely existing the Greens are already shifting America leftward.

Camilo Gómez is political writer at The Mitrailleuse.