Jim DeMint Wants to Save the Republican Party—from Itself 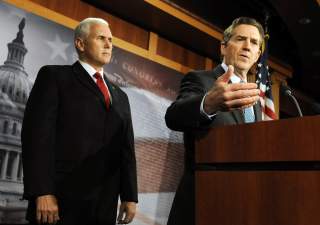 Jim DeMint is back. You’d be forgiven for not hearing much about his new venture, the Conservative Partnership Institute, in a week that saw the president repeatedly attack his own attorney general, the president’s new communications director profanely lacerate the White House’s chief of staff and chief strategist, and the administration’s first major domestic initiative go down in seemingly conclusive defeat. But such open infighting and policy ineptitude is precisely what DeMint is seeking to ameliorate.

“The question I hear around the country more than any other question is: ‘What happens to conservatives once they get to [Washington]?’” DeMint, the former Heritage Foundation chief, U.S. Senator from South Carolina, and Greenville-area congressman told me in a wide-ranging interview this week. “The whole country is frustrated,” he elaborated. But why another think tank-type project? “The thing that doesn’t exist is once you get here, there’s no support system for conservatives in Congress. Or a support system for conservative staff . . . What we want to do is use the expertise that we’ve got. And I think I’ve got some of the best staff leadership from the House and the Senate that I’ve over my twenty years here,” DeMint says, underplaying his notorious blue-chip rolodex. The “training and the staff management” will be central to the group’s mission, emphasizes Wesley Denton, senior spokesman and longtime DeMint aide, potentially setting the group up as a major right-wing conduit in Washington. DeMint notes: “I’m sure we’ll be involved in almost every issue. . . I don’t see any issue we won’t be involved with.”

DeMint’s departure from Heritage Foundation earlier this year was acrimonious. During the campaign, he aligned the organization—more than many in the building might have been comfortable with—with the future president, Donald Trump. Heritage pounced once Trump was elected last November. “I’m surprised there are so many people here because I thought everyone at Heritage was working over at transition headquarters,” Heritage fellow John Yoo, a legal alum of the Bush administration, said at an event for the think tank days after the election. “I asked the taxi cab driver to take me to Trump transition headquarters and he dropped me off here, instead.” Its power within the administration since has been widely speculated upon. But, nevertheless, board president Thomas Saunders III cited “significant and worsening management issues that led to a breakdown of internal communications and cooperation,” in dismissing DeMint earlier this year. A rivalry between DeMint and and the young-gun leader of Heritage Action, Mike Needham, has been rumored, but the picture is probably less clear-cut than that.

DeMint insists he doesn’t want to directly rival Heritage. For DeMint and his team (five full-time staffers, but that could modestly grow in the next year or two), the word “Partnership” in the organization title isn’t just filler—it’s the whole goal. CPI sees a space for a facilitator and peacemaker on the right. Perhaps nowhere is this more important—and more potentially fraught of a task—than in the realm of foreign policy, riven with divisions in the wake of Trump’s defenestration of the neoconservative establishment during last year’s election. “We’ll be bringing conservatives together to talk about it, make sure they have the right information from all the best sources in the country. . . But we’re not the ones who are going to be trying to dictate what the positions should be.” Denton argued to me that “there are always has been” a divide on the right on foreign policy, Trump just changed the various groups’ relative fortune; the president’s extreme unpredictability also makes the chessboard less clear, of course. CPI sees a role here, citing think tanks that span the ideological gambit: the neoconservative, hawkish American Enterprise Institute, the noninterventionist, libertarian CATO Institute, and “everyone in between.” “We see ourselves as bringing all those sides together,” Denton says.

If anyone can do it, it might be DeMint. But as the recent healthcare debacle has illustrated, forging rightward consensus is not going to be smooth sailing. A double-edged sword for CPI is who has shown early excitement in the new group. While DeMint and Denton are no doubt appreciative of words of support as they get off the ground, it is nonetheless telling who seems amped. Sen. Mike Lee, the ardent constitutionalist and small-government conservative, and Rep. Mark Meadows, chair of the House Freedom Caucus, were two early endorsers of the group. Denton this week retweeted a video from Fox Business, with a caption that made the group’s mission perhaps more manifest: “@JimDeMint launches initiative to push more Republicans to the Right.” And as DeMint noted to me: “almost all Republicans when they run say they are conservatives.”

DeMint complained to me that on the left figures such as Elizabeth Warren and Bernie Sanders receive a hero’s welcome at party functions, while on the right dyed-in-the-wool conservatives usually get the cold shoulder from establishment forces. In addition, DeMint chose to publish his announcement letter in the Federalist, a publication that features a number of writers long critical of Trump. And though DeMint will no doubt seek to forge a conservative foreign-policy consensus, in Congress he was, of course, forced to take sides. Many of those old fault lines exist today, as exemplified by the recent fight between Tucker Carlson and Max Boot.

DeMint’s record, with exception of joining with most Republicans in supporting the Iraq War, leans noninterventionist: he opposed U.S. intervention in Kosovo and Libya, and was forthrightly against involvement in Syria. Rachel Bovard, a Heritage alum joining DeMint at CPI, worked for Rand Paul, who on Friday sought to hold up the defense budget.

And how is DeMint’s message of conservative partnership going to work in reality with an irascible president prone to singling out his own people? DeMint criticized Trump’s recent complaints against Attorney General Sessions, speaking on Mr. Carlson’s show earlier this week. And though DeMint was later instrumental in pivoting the group to Trump, a former Heritage employee told me most of the organization favored Ted Cruz against the New York mogul in last year’s primary, once the contest narrowed. “I wouldn’t be in the Senate if it weren’t for Jim DeMint,” Cruz noted in a 2015 campaign video.