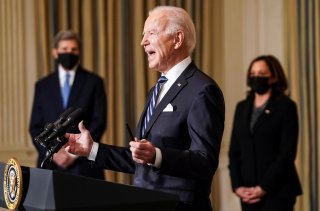 Democrats on Capitol Hill are working to jam through the administration’s $1.9 trillion coronavirus relief package with or without Republican support, using a legislative procedure known as reconciliation—a move that will put President Joe Biden’s promise to restore bipartisanship to an early test and determine whether Democrats are truly united to solve the unprecedented series of crises.

Biden met with ten Republican Senators Monday in a nearly two-hour conversation to review the provisions of the GOP counter-offer to his proposal in attempts to uphold his pledge to reach across the aisle to craft legislation—a meeting that was dubbed “excellent” by the moderate group’s leader, Sen. Susan Collins (R-Maine). The GOP’s $618 billion measure includes more targeted relief to Americans who are particularly underwater due to the financial impacts of the pandemic, such as small businesses, schools and the unemployed.

“It was a very good exchange of views. I wouldn’t say we came together on a package tonight. No one expected that in a two-hour meeting,” Collins told reporters Monday. “But what we did agree to do is follow up and talk further.”

But prior to the meeting, Democratic congressional leaders signaled an effort to move forward with Biden’s massive spending measure, as House Speaker Nancy Pelosi (D-Calif.) and Senate Majority Leader Chuck Schumer (D-N.Y.) filed a joint budget resolution—which could serve as the first step to enacting a reconciliation bill that would pass the administration’s relief plan.

Budget reconciliation would allow the Democratic Senate majority to push through Biden’s plan with a simple majority of just fifty-one votes, as opposed to sixty, which is needed to overcome a filibuster. But that means that every single Democrat would need to be on board with the reconciliation effort since the upper chamber is now split fifty/fifty, plus Vice President Kamala Harris’s tie-breaking vote. The evenly divided Senate would enable Democrats to proceed with additional coronavirus relief without Republican votes.

And while Biden has vowed to practice bipartisanship and ease political tensions on the Hill, the president also noted that getting a bill passed to soothe pandemic-related needs is a top priority, one that’s even more important than finding a common ground with Republicans.

“The Biden administration has multiple goals right now, some focused on policy and others focused on tone. The overriding goal, however, is to create the impression that they are on top of the virus. Any move they make is designed to foster perceptions of empathy and effectiveness. And they will sacrifice bipartisanship to do that,” Daron Shaw, professor of government at the University of Texas at Austin, said.

Biden urged Senate Democrats on a private call Tuesday to go big on coronavirus relief, pressing them to move forward with a large package immediately and indicating that the bill would proceed under the budget reconciliation process. The president made clear on the call that he thought the proposal of that size was firmly inadequate and that there were serious risks of passing a small package.

“President Biden spoke about the need for Congress to respond boldly and quickly. He was very strong in emphasizing the need for a big, bold package. He said that he told Senate Republicans that the $600 billion that they proposed was way too small,” Schumer told reporters after the call.

Other Democrats appear to be aligned with not negotiating with colleagues on the other side of the aisle due to the seething pressure to swiftly pass legislation, as the upper chamber voted 50-49 on a motion to proceed to a budget resolution that would allow Biden’s relief package to pass with a simple-majority in the Senate without Republican support if necessary.

“We all want bipartisanship, and I think you’re going to see more of it as we move down the pike,” Sen. Bernie Sanders (I-Vt.), who caucuses with Democrats, told ABC’s Martha Raddatz on Sunday. “We all look forward to working with Republicans, but right now, this country faces an unprecedented set of crises.”

Republicans, who are widely frustrated with the Democratic effort to craft and pass partisan legislation during a duo of crises without their input, are looking to condemn Biden for abandoning his bipartisanship pledge that acted as the centerpiece on his campaign trail post-Election Day.

“We recognize your calls for unity and want to work in good faith with your Administration to meet the health, economic, and societal challenges of the COVID crisis,” the ten GOP senators wrote in a letter to Biden that outlined their proposal. The moderate Senate Republicans who contributed to the counter-effort are: Collins, Shelley Moore Capito (R-W.Va.), Lisa Murkowski (R-Alaska), Bill Cassidy (R-La.), Mitt Romney (R-Utah), Rob Portman (R-Ohio), Todd Young (R-Ind.), Jerry Moran (R-Kan.), Mike Rounds (R-S.D.), and Thom Tillis (R-N.C.).

Experts also expect pushback from Republicans if Democrats move forward with the reconciliation procedural tool, even though it’s been used to pass crucial pieces of legislation, including the Bush tax cuts of 2001 and Trump’s 2017 tax cuts.

“There is no doubt that, if President Biden and the Democrats pass their coronavirus relief package through the budget reconciliation process that the Republicans used to enact the Trump tax cuts, Republicans will accuse them of abandoning bipartisanship and any quest for unity, just as Democrats accused Republicans,” Rogers Smith, a political science professor at the University of Pennsylvania, said. “Biden and the Democrats may well calculate it is more important for the country, and in the long run better for them politically, to enact quickly the big relief package they think is needed.”

Biden has waved an openness to parts of the GOP’s proposal, including limiting direct relief to low and middle-income Americans, or those who are in greater need of immediate federal aid.

The GOP offer provides $300 weekly unemployment bonuses that would be extended through June—though Biden’s would last through September—$1,000 stimulus checks for individuals making up to $50,000 a year and families with a combined income of up to $100,000. Individuals making less than $40,000 or families yielding less than $80,000 would receive $1,400 payments. The bill also includes $160 billion for vaccine distribution and development, coronavirus testing and the production of personal protective equipment (PPE); $20 billion for school reopenings; and more relief for small businesses. It does not provide, however, any aid for state and local governments, a Democratic priority. Biden has also added a provision that boosts the federal minimum wage to $15 an hour.

“Biden has traction from the fact that a bipartisan majority of the public, mayors and governors support a robust package. More generally, the reality for voters is in whether their lives get better—not in whether it is done through reconciliation or not,” Norman J. Ornstein, an emeritus scholar at the American Enterprise Institute, said. “The question now is whether, since it is clear that he has the 50 votes to do this with reconciliation, there are 10 Republicans who will come up to, say, [$]1.7 trillion with more targeted relief and perhaps changes in the minimum wage. I am skeptical.”

But it’s important to note that it’s unclear whether Biden’s plan could be fully passed using reconciliation due to its strict set of rules, as it was established to fast-track budget bills. And provisions relating to government spending, like increasing the minimum wage, might not be allowed—it’s up to the Senate parliamentarian to decide.

“Because President Biden is strongly invested in showing that he does hope to foster unity, in behind-the-scenes discussions he will genuinely be very open to compromises, if they do not make the relief bill unsupportable by many Democrats, and if his experts say the compromise bill will be adequate for the emergency,” Smith said. “But whether there is really an option for a compromise that will attract some Republican votes without losing too many Democratic ones is doubtful.”