Joe Biden’s Moment of Truth in the Middle East 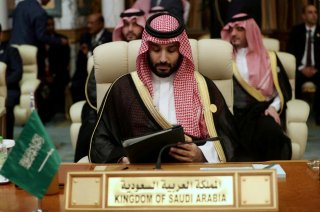 The contrast between the two competing visions in the Middle East is clear: There is Saudi Arabia and its Arab partners, striving hard for a promising future for their people. And there is Iran and its extremist proxies, confronting the region with militancy and nuclear threat.

U.S. president Joe Biden will confront this choice between the forces of stability and the sources of trouble when he travels to the region next month. Which side he chooses will have an important bearing on his presidential legacy.

Biden’s first stop will be Israel, where he will meet the Israeli prime minister in Tel Aviv and the Palestinian president in the West Bank. As expected, he will reassure American support for Israeli security and Palestinian statehood. Israeli and Palestinian narratives on the Palestine conflict differ, but Biden may find their leaders on the same page on the role of Hamas as its current instigator.

This Iranian prodigy recurrently fires Iranian-made munitions from the Gaza Strip into Israel, inviting disproportionate Israeli retaliation and causing irreparable loss of precious lives on both sides. By smuggling these arms through Syria and Hezbollah in south Lebanon, Iran continues to hijack the Palestinian cause, as Hamas militancy allows Israel to kill more Palestinians and expand Jewish settlements in the guise of security.

Biden will then arrive in Saudi Arabia, on the first-ever flight from Tel Aviv to Jeddah, where he will meet Saudi king Salman bin Abdul Aziz and Crown Prince Mohammed bin Salman. The Saudi leadership cannot do without focusing on the perpetual danger from Iran in the talks. The following day, Biden will attend the summit of the heads of state/government of the Gulf Cooperation Council (GCC) and three major Arab nations, including Egypt, Jordan, and Iraq. This high-profile gathering of Arab leaders will also demonstrate to him that the kingdom is not alone in facing the existential threat from Iran.

The United States and Saudi Arabia have an enduring relationship that dates back to 1945, when U.S. president Franklin D. Roosevelt and Saudi king Abdul Aziz Ibn Saud met aboard the USS Quincy off the Saudi coast. This partnership has stood the test of time for the last seventy-seven years, producing consequential outcomes in world politics, from defeating Soviet Communism before and global terrorism more recently. It has also withstood critical crises along the way such as the 1973 oil embargo and the 9/11 terrorist attacks, each time emerging stronger in the decades ahead. So shall be the case this time, as the dust settles down on what was perhaps the most serious instance of friction in bilateral relations.

America and Saudi Arabia are so invested in each other through shared interests and values that they are able to come together quickly after drifting apart momentarily. This historical link is institutional, reinforced by extensive public bonds. Transitory issues like human rights have seldom disrupted this link, as successive U.S. presidents have understood the Saudi rationale that a deeply traditional society could only transform gradually. Hence, the recent glitch could only be an aberration, especially if it was rooted in internal U.S. political cleavages, particularly the deliberate Democratic bid to associate Saudi leadership with the previous U.S. administration.

The U.S.-Saudi partnership is too precious to fail over such trivial matters, as Biden also seems to have finally understood by restoring the persisting pattern in relationship. This pragmatic decision does not portend a presidential compromise of U.S. ideals over interests, as the unfounded criticism of his current approach to Saudi Arabia suggests.

Contrary to some U.S. media opinions, the U.S.-Saudi relationship is neither transactional in nature, i.e., Saudi oil in exchange for U.S. security nor is it grounded on any zero-sum calculation such as the United States versus China and Russia.

The Ukraine war has caused a rare global energy crisis, leading to spiraling fuel prices in the United States and compelling the Biden administration to woo the kingdom to boost oil production and bring these prices down. But Saudi Arabia has obliged the United States many times before and will do so again, even if it is still recovering from the economic shock of the global pandemic. The kingdom has already done this by offering a temporary increase in the oil output of OPEC+ nations. The fact is that energy is just one of the several strategic priorities that Saudi Arabia shares with the United States, which range from regional security and conflict resolution to nuclear proliferation and international terrorism. This necessitates continued U.S. commitment to Middle Eastern security.

The Saudi-GCC approach to great power relationships is also not based on any binary proposition. As a matter of fact, all Gulf nations are diversifying their relations with the emerging powers of Asia, China in particular. They see enormous economic benefits in partnering with China’s Belt and Road Initiative. Russia offers them an alternative source for procuring necessary defense equipment. But neither China nor Russia can replace America or Europe in the Gulf in so far as the region’s security and economic interests and aspirations are concerned. Given its acute dependence on Gulf oil, China also wants the United States to secure the region’s strategic sea lanes. As for the Saudi-Gulf engagement with Russia, it will be useful as and when the Ukraine War moves towards diplomatic resolution.

The Saudi-Gulf logic for a consistent U.S. security role in the Middle East is rooted in the turmoil caused by the Iraq War and worsened by the so-called Arab Spring. This is largely due to a series of missteps the United States has taken in the past two decades without consulting Saudi Arabia, which contributed to Iran’s emergence as a regional menace. For instance, the United States played with Iraq’s sectarian fault lines, handing the country’s destiny over to Iran. It then refused to support Arab resistance against the Syrian regime, allowing Russia and Iran to establish a foothold in Syria.

Since 1979, the ayatollahs of Iran have consistently endangered peace and stability in the Middle East and beyond. With “Death to America” as their professed mantra, Iran and its proxies have destabilized the Arab world with their malign designs. Saudi Arabia, Yemen, Iraq, Syria, Egypt, and Afghanistan have all suffered dearly at their hands. Iran’s Islamic Revolutionary Guards Corps and Hezbollah have directly attacked U.S. interests in the region and are responsible for a spate of international assassinations and kidnappings. Despite this, after proof emerged that Iran had intended to develop nuclear weapons, the Obama administration rewarded Tehran with a nuclear deal in 2015. The war in Yemen intensified in the same year, as the Iran-backed Houthi militia rebelled against the country’s legitimate government and began endangering Saudi security.

Yet, instead of helping the kingdom protect its critical infrastructure from Houthis’ missile and drone attacks, the Biden administration chose to delist this militia as a terrorist organization. It also pulled out the U.S. Patriot missile defense system in Saudi Arabia. The emboldened Houthis thus extended their aggression to the UAE earlier this year. Of course, as traditional U.S. allies, Saudi Arabia and the UAE look up to Washington for security support against Iranian-sponsored militarism. They naturally get upset when it is lacking or absent.

The Trump administration, despite doing the right thing in renouncing Iran nuclear deal, disappointed the kingdom by doing nothing in response to the 2019 Houthi attack on its key oil refineries in Abqaiq and Khurais. The UAE is also rightfully aggrieved with the Biden administration for a similar lack of response this year, and for thwarting the mutually agreed F-35 stealth fighter deal that was made during the Trump era. All credit to France, that it understood the region’s security predicament and provided Abu Dhabi with a viable alternative for air capability. France is also now collaborating with Saudi Arabia in humanitarian relief projects in economically crippled Lebanon, which has been hostage to Hezbollah militancy for decades.

The fundamental issue of securing the Middle East from Iranian and Iranian-sponsored aggression will be on the table at the GCC+3 summit in Jeddah on July 16. The currently stalled negotiations to revive Iran nuclear deal will also focus in the debate. From the perspective of all the participating nations, the so-called Joint Comprehensive Plan of Action (JCPOA) will be meaningless if it does not impose tangible restrictions on Iran’s ballistic missile program and proxy warfare in the region. In any case, as the International Atomic Energy Agency recently reported, Iran is close to nuclear breakout and also defying the nuclear watchdog’s monitoring regime. This makes the JCPOA revival talks completely redundant.

Perhaps Biden also now understands what the region expects of him at this critical moment, which is why he has emphasized his presidential responsibility to enforce “peace,” rather than pursue energy, ahead of the visit. If that is the case, he will find the emerging climate in the Middle East considerably reassuring for a prospective U.S. security role.

First, regional vibes are currently quite conducive for conflict resolution and reconstruction, as the political fissures caused by the 2011 uprisings recede. These signs of peace include the growing affinity among Qatar, Saudi Arabia, and Egypt; normalization of Turkey’s hitherto sordid relations with the UAE, Saudi Arabia, and Egypt; and resumption of dialogue between the UAE and Syria. In Yemen, the Saudi-led political transition, ceasefire enforcement, and humanitarian relief efforts have also increased the prospects of ending the seven-year war.