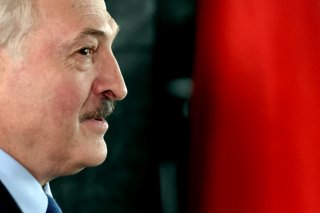 U.S. President Joe Biden has an historic opportunity to bring Europe together and reverse the tide of dictatorship by building an international coalition to support democracy in Belarus. In 2020, Belarusians unexpectedly called Alyaksandr Lukashenka’s legitimacy into question. Lukashenka brazenly rigged the results of the 2020 presidential election, claiming that he took 80 percent of the vote, but neither the United States nor the European Union recognizes his victory. A months long protest movement has coalesced that demands new elections under the supervision of the international community.

Opposition to Lukashenka unified around Sviatlana Tsikhanouskaya, the likely winner of the August election. A former English teacher and a political rookie, initially chosen as a stand-in for her jailed husband, Tsikhanouskaya is growing on the job, has struck a chord with Western interlocutors, and has demonstrated an ability to rally the beleaguered people of Belarus. While forced to operate from exile in Lithuania, she has assembled a capable team under the banner of the Coordination Council.

Recent years have seen no better chance for U.S. leadership to facilitate lasting positive change in Europe than the crisis in Belarus. But how to secure democratic change in Belarus is not simple given internal resistance and Moscow’s determination to prevent another “color revolution.”

Lukashenka is likely finished, unable to restore any authority or legitimacy. But he is seeking to hang on despite Moscow’s efforts to arrange a pliable replacement who would preserve Minsk’s pro-Russian orientation. Managing Moscow’s efforts to prevent an aroused citizenry from choosing their own leader is no easy task. Russia remains the key geopolitical player in Belarus, often plays the long game, and may be willing to countenance military options that the United States cannot.

Perhaps the key fact is that Belarusians have made it amply clear that they want accountable leaders that they can choose and dismiss for themselves. More than thirty thousand peaceful protesters have been detained since August, more than three hundred and fifty police officers have defected, and ordinary Belarusians are no longer afraid to voice their opposition to the regime. Kremlin support for the ongoing repression risks turning the Belarusian people—historically friendly toward Russia—in a pro-European direction. These changes in Belarus are something that Moscow cannot ignore, and the United States and its allies must nourish and strengthen them in consistent ways that avoid and deter a Kremlin overreaction. Biden, with his long experience promoting U.S. values and interests and his determination to strengthen transatlantic relations, is ideally situated to promote clear support for the people of Belarus that does not directly challenge Moscow’s security interests.

Biden’s dilemma is how to encourage and strengthen the opposition without sparking and permitting a successful Kremlin crackdown.

Six months after Belarus held a fraudulent presidential election, an insurgent street protest movement shows few signs of letting up. Despite cold temperatures and a decline in the number of protesters, Lukashenka is still fighting for his political survival. On August 9, Tsikhanouskaya likely beat Lukashenka in the presidential election, according to most assessments. Few expected such a result.

At least four factors paved the way for a strong protest movement to appear. First, Belarusians are exhausted with Lukashenka’s twenty-six-year rule. Second, the former state farm boss first denied and then ignored COVID-19, doing nothing to protect the Belarusian people against the pandemic. Third, Lukashenka badly miscalculated: while disqualifying male candidates, he allowed Tsikhanouskaya to stand in her husband’s place, thinking that no one would elect a woman. Fourth, as hundreds of thousands of Belarusians came to the streets to oppose Lukashenka’s stolen election results, he responded with excessive violence.

Two days after the presidential election, Tsikhanouskaya was forced to depart for Vilnius, Lithuania, where she remains. There she has established an office and cabinet of representatives. She has met with numerous European political leaders. She has demanded that Belarus hold a new round of free and fair elections under the eye of the international community.

In Belarus, police continue to use excessive force against peaceful protesters, including women and the elderly. Torture and ill-treatment of detainees are well-documented.

A growing worry is that the democratic movement will run out of money over the winter. Initially, Belarusians crowdfunded more than $10 million through online platforms, but resources are running low and Belarusian citizens cannot keep giving. International assistance cannot easily be moved to Belarus since bank accounts are monitored by the security services and the regime’s closure of the borders has limited the ability of people to travel to another country to bring in cash. Digital currencies are the best way to support the democratic movement, but few international aid organizations will be able to send large amounts of funding that way and satisfy their reporting requirements. Finding ways to move U.S. assistance quickly and to those who need it most in Belarus will be one of the greatest challenges for the Biden administration.

In Belarus, Russia is increasingly facing the same dilemma as it faced in Ukraine and Georgia in the early 2000s. Moscow knows Lukashenka has lost legitimacy, but it cannot accept the idea that the people of Belarus should be allowed to choose their own leader. Consequently, Moscow has made policy choices that have painted it into a corner.

The situation looked far less dangerous prior to the August election. Moscow had long been irritated by Lukashenka’s flirtation with the West and had been trying to rein him in by cutting subsidies and pressing him to integrate with Russia. But Russia was confident that the Belarusian people, while proud to be citizens of an independent state, did not dream of EU or NATO membership and felt genuine kinship toward Russia.

Now all those assumptions have been thrown into doubt. Moscow’s reaction could produce a nightmare scenario. In the run-up to the August election, Moscow was blind to the growing popular discontent with Lukashenka’s twenty-six-year rule. Russian leaders did not appreciate that the brazen manipulation of the election process would be rejected by most Belarusians.

Putin may have let his obsession with preventing regime change through popular protests lead him to endorse the legitimacy of the “official” vote count. This closed off the possibility of an early rerun of the elections that might have defused the situation.

Instead, Putin doubled down, refusing to engage with Tsikhanouskaya or the Coordination Council, and shot down early mediation efforts by Belarusian religious leaders as well. By torpedoing dialogue, Russia effectively condoned Lukashenka’s use of force and mass arrests to suppress the protests, enabling him to dig in.

Russia subsequently tried to distance itself from Lukashenka by creating an alternative path for his departure based on an ill-defined constitutional reform leading to new elections without Lukashenka’s participation. It is not clear that Moscow will be able to find Russia-friendly opposition leaders who would have credibility with the Belarusian people.

While Lukashenka hangs on, Moscow seems to be waiting for the Belarusian security services to bring the protests to an end before moving to install a more pliable leader. Thus far Moscow’s actual intervention has been limited to sending media propagandists to prop up Belarusian media. But these steps may not work; if the protests continue and lead to further violence by the regime, it will further alienate the population and provoke stronger anti-Russian sentiment, as well as increased public support for a Euro-Atlantic future, which is already being borne out in public opinion polls.

In short, the longer the situation continues without a turn toward dialogue with the real opposition and the holding of new elections, the more polarized things could become. This could leave Moscow and Lukashenka with fewer options other than brutal repression—perhaps with the Russian military stepping in if the Belarusian services falter.

Belarus has two concrete economic problems. One is long-term. The Belarusian economy has not grown since 2012 because of its systemic problems. The other is short-term: Belarus only has international currency reserves in cash for one month of imports. With an annual current account deficit of about $2.5 billion and debt service of $3 billion in 2021, it needs about $6 billion in international financing in the coming year. Yet, the country’s financial problems should not be exaggerated. Its total public debt amounts to only $18 billion or 35 percent of GDP, according to the Ministry of Finance. After a political thaw in 2016, all the international financial institutions returned to Belarus and are plugged in. Amazingly, in late June 2020, Belarus raised $1.25 billion in Eurobonds on international financial markets.

Given that Lukashenka controls the government and is not prepared to accept the conditions of the International Monetary Fund, Russia is the only plausible source of financing. Nobody understands this better than Putin. On September 14, Lukashenka went begging to Putin, but the Russian president promised only $1.5 billion of credits. For the rest, he suggested that Lukashenka had to look for private Russian money, hinting that 2,500 Belarusian enterprises had Russian capital.

The Putin-Lukashenka drama is like watching the same film again and again. The Kremlin appears to be repeating what it attempted in 2011, letting dubious Russian oligarchs take over the biggest and most valuable companies in Belarus for a pittance with the help of state bank credits. Belaruskali, the largest Belarusian company, produces one-fifth of all potash in the world. Belarus has also a big nitrate fertilizer company, Hrodno Azot. The big Russian potash producer Uralkali wants to take over Belaruskali and the Russian fertilizer company Uralchem wants to seize Hrodno Azot. Not accidentally, both Uralchem and Uralkali have been taken over by Dmitry Mazepin, a Belarusian with close links to the Kremlin and in billions of dollars of debt to Russia’s two biggest state banks.