Joe Biden’s Strategy on China Boils Down to One Word: Soft 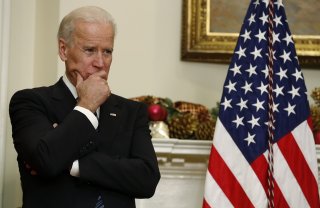 There is a prevailing view on both sides of the Pacific that President Joe Biden will treat China in a manner similar to his predecessor: skeptical of Beijing’s promises and strong against Chinese belligerence from the Western Pacific to cyberspace.

This assessment is elegant but wrong.

The conventional wisdom was reinforced by this week’s prominent meetings between top Japanese and South Korean officials and their American counterparts, Secretary of State Anthony Blinken and Secretary of Defense Lloyd Austin, with the usual paeans to “linchpins” of security. None of that pomp will accompany the muted gathering Thursday and Friday in Alaska between Blinken and national security advisor Jake Sullivan and senior Chinese officials: top diplomat Yang Jiechi, and State Councillor Wang Yi.

It is true that two months into his presidency, Biden has not ordered a reduction in any of the tariffs or export controls that former President Donald Trump enacted on China. Like clockwork, the U.S. Navy sends a ship through the Taiwan Strait each month and intentionally dwells in waters and airspace dubiously claimed by Beijing.

The language from Washington is more soothing still. Biden nominees for high office promise in confirmation hearings to be appropriately wary of China. One who initially did not do so sufficiently, Commerce Secretary Gina Raimondo, had her nomination delayed and it only proceeded after assurances that export controls would remain in place. Blinken has criticized Beijing for trampling democracy in Hong Kong and abusing human rights throughout the country

But this should be better understood as posturing by the administration and conducting the alliance maintenance necessary in order to turn subsequently to reducing tensions with Beijing—a process which as long as Chinese Communist Party boss Xi Jinping is in power will necessary involve mostly American concessions.

Recall that Hillary Clinton, who was Barack Obama’s first secretary of state, also made her first official stops abroad in Japan and South Korea, promising that, “The alliance between the United States and Japan is a cornerstone of our foreign policy.” But what followed was not a period of strengthening alliances among East Asian democracies against China. Instead, the Obama-Biden administration focused on expanding trade with China, gullibly accepted bogus Chinese promises not to cyber-attack the United States or militarize the South China Sea, and browbeat allies like Taiwan with delayed arms sales and tacit endorsements of soft-on-Beijing politicians.

Will this pattern repeat? One indication it may is that the Biden administration seems intent on picking up where the Obama administration left off on nearly every foreign issue. It already stopped the Keystone XL oil pipeline with Canada, rejoined the Paris climate agreement, and sought negotiations to rejoin the 2015 nuclear deal with Iran. These were all Obama administration priorities put on hold by Trump. So too was the discredited globalist view that economic integration with China would eventually improve security and human rights.

Biden himself has been limited in his criticism of China, calling the government there a rival or competitor, but not an adversary. While administration officials recently told the New York Times they planned to retaliate against Russia for cyber-attacks last year, they made no such direct vow for the major breach of Microsoft email systems that the company attributed to China.

Biden has few places other than China to turn for a diplomatic breakthrough that any new administration wants. He just caused a collapse in relations with Moscow by blithely calling Russia’s president a “killer”—a pointless but damaging flippancy that even cold warriors like Curtis LeMay managed to avoid. Iran and North Korea have rebuffed Biden’s attempts to negotiate, undoubtedly preferring to wait for payola before talking. Trump largely achieved peace between Arabs and Jews, removing for his successors the perennial Lucy’s football known as the peace process.

Furthermore, cautious voices like Blinken’s are losing debates within the administration. The impetus to meet early with the Chinese came from the National Security Council, not the State Department. Asia policy czar Kurt Campbell sought for the meeting with the Chinese to occur in Washington; the Chinese settled on Alaska. Campbell was the top Asia diplomat at the State Department for Obama’s first term, boasting of the “pivot to Asia” that contrary to billing saw U.S. power recede in the region. At the White House, he is joined by climate czar John Kerry, who desperately wants to get to yes on a landmark climate deal with China.

The administration has assured reporters and members of Congress that the meeting with Chinese officials is just to reiterate in private concerns they have expressed publicly. What is more likely is that having gone through the kabuki of being seen supporting allies with stops in Tokyo and Seoul, the Biden officials’ main goal will be to begin laying the groundwork for undoing Trump’s approach to Beijing. Probable topics of discussion include reducing U.S. tariffs or export controls, a summit between Biden and Xi, and trading Huawei executive Meng Wanzhou, currently held in Canada on corruption charges, for prisoners held by China.

Unfortunately, a major change in U.S.-China policy is likely coming.