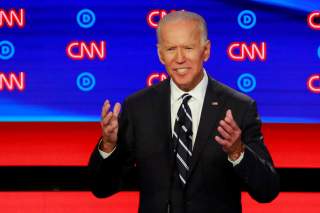 “It’s not going to be Biden,” a Republican lawmaker close to the White House told me recently. “And if it is,” President Donald Trump truly prefers that.

The administration and the re-elect may want to reconsider their analysis. Wednesday night’s Democratic presidential debate, along with a crush of new polling data, confirmed what we already knew: Joe Biden, despite assertions to the contrary, remains a clear front-runner.

He continues to want to skip to the general election, where he likes his chances. On the recent controversies surrounding President Trump and immigration, the former vice president said: “So, Mr. President, let’s get something straight: We love it. We are not leaving it. We are here to stay. And we’re certainly not going to leave it to you.”

Aside from Biden’s reemergence, Rep. Tulsi Gabbard had the breakout performance. The anti-establishment firebrand continued to drill down on foreign policy. She attacked the president for championing a revamped, but misguided alliance with Saudi Arabia. “How can you say Saudi Arabia is a great partner in fighting terrorism when they are fueling and funding terrorist groups in Yemen?” she told Fox News after the debate.

Gabbard also warned against administration Iran hawks, saying military action against the mullahs of Tehran would be “far more devastating, far more costly” than even the Iraq War, of which Gabbard is a veteran. Despite a feisty online presence, Gabbard’s polling numbers are in the cellar, however.

On polling, Biden had already rebounded, even before the debate. According to Quinnipiac, he is nationally ahead by over ten points. The star of the first debate round, Sen. Kamala Harris, meanwhile, saw her numbers nearly halve before Wednesday. So the conventional wisdom that the stage was Harris’ to lose and Biden’s to win back may have been properly in reverse.

Harris’ elevation in the media made her the subject of a variety of prepared attacks. "She put over 1,500 people in jail for marijuana violations and then laughed about it when she was asked if she ever smoked marijuana," Gabbard said, referring to a February clip where the California senator made light her past drug use. Harris responded Thursday by calling a Gabbard “Bashar al-Assad apologist” who is “polling at zero,” referring to Gabbard’s still-controversial 2017 trip to Syria.

Biden was the biggest target. Harris made a point of repeatedly calling Biden “Senator Biden,” trying to subliminally achieve three aims: bring Biden down to the rest of the field, diminish his ties to former President Barack Obama, and remind lefty voters of Biden’s allegedly reactionary legislative record.

Indeed, the former vice president’s opponents sought to parody how frequently he highlights his ties to Barack Obama. “You can't have it both ways,” Sen. Cory Booker said. “You invoke President Obama more than anybody in this campaign. You can't do it when it's convenient and dodge it when it's not.” Obama’s name is gold in Democratic politics; his politics have a tenuous legacy in a party that’s moved left in the Trump era. But Biden diffused that situation with humor, at one point grabbing Booker’s arm: “Excuse me, the future president.”

But Harris is partially right: Biden’s challenge likely remains his double-edged sword of a record. He’s easily the most famous Democratic candidate in the race, with name recognition on par with the president. Like Trump, however, his decades of fame make him vulnerable to opponents who want to dredge up the past. Biden hopes to remain laser-focused on what he sees as his salient feature: electability. And he rejects the view that the Democratic party needs a shift to the left, as Senators Elizabeth Warren and Bernie Sanders, who debated Tuesday night, contend.

Biden also denies that Trump’s shock 2016 victory was a realigning election: “We’re talking about 72,500 votes in three states that changed.” If he’s made any mistake, it’s the spirit of that assessment. If he indeed gets the nomination, Biden’s in for a dogfight with the president, the first Republican in a generation to collapse the Blue Wall.